Ana , Time to save OG again

Ana - Time to save OG again

A wild ana was found in a pub match, playing Monkey King. For some, this may seem like a mundane occasion, especially for a Dota 2 fanatic like ana. However, OG fans see it as the two-time champion's potential return to team OG. 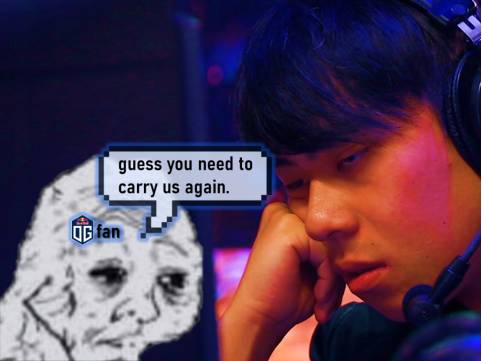 Spotted in a pub

It's not every day we get to watch ana play Dota 2. Ever since the prodigy won his second champion's title at Tea Eye 9, it wasn't long before he announced his break from his career. Although he did mention that it's a year-long break until the next season, we have yet to hear any official news about his return to OG.

Regardless, considering the timeline and how the present team OG is performing, his return may not be unrealistic after all. Let's not forget that because of how the Dota Pro Circuit 2021 is structured around only two majors, OG really needs to secure a decent finish in the next major. Else, it's regional TI qualifiers or no Tea Eye at all.

That said, for a team of such caliber, team OG will probably make it into Tea Eye 10 by hook or by crook. We'll then, in the pub match as Monkey King, he showcased absolute prominence over everyone else in his league. Unsurprising for a champion, but considering how long he has been away from his monitor, it's a good sign that ana is still a fearsome player.

Let's be frank, team OG is in no shape that anyone anticipated for a two-time champion team. Sure, they are missing two of the original players that brought them glory, but there are still crucial players around, such as Topson, Notail, and Ceb. Regardless, they missed their entry to the Singapore Major 2021 after failing to defeat Team Liquid twice during the tiebreaker games.

Many fans have taken the opportunity to bash on Midone's poor performance or even Saksa. However, these players are still exceptional players, who were the best in their league. Yet, it just doesn't feel right without ana or JerAx. JerAx's role as a roamer, position 4 support, and playmaker was just too good to replace. Despite being just a support player, he often considers many other little decisions that really impact how the game goes.

He would make it his life goal to break his opponents' lane, whether by messing up the creep aggro, blocking the camp, and still harass the enemy. Oh, and he does it all at once!

Part-time job as a Dota 2 pro

Perhaps one of the traits that make ana such an exceptional carry is that he plays unorthodox heroes. The carry Io is just one of the many creations he bestowed upon the Dota 2 community. It isn't even an exaggeration to say that he popularised that very meta. These days, team OG and many powerhouse teams tried to replicate the same meta, given the situation is perfect for it.

All thanks to Ana, who doesn't even play Dota 2 for most of his pro career. Anyways, I reckon that everyone is excited for Tea Eye 10, and of course, ana's likely return. With the new uprising of stronger teams, such as Team Liquid and Alliance in the European competitive scene, ana's return might just be OG's saving grace. Stay tuned.