February 17 was a rather normal day for the Dota community - fans watching some Pro Circuit matches and most people are grinding in matchmaking. But this normal day turned into an exciting one as the entire community was surprised after Valve and Netflix revealed a new animated series entitled “Dota: Dragon’s Blood” (Twitter)

When can we see more of it?

Earlier today, Dota 2’s social media announced the new anime with a trailer (YouTube) before its premiere on Netflix in March 25th (Netflix).

According to Wykrhm Reddy (Twitter), the series will have eight episodes produced by Ashley Edward Miller – the man known for his works in Thor and X-men: First Class, and animated by Studio MIR, the studio behind famous series such as Avatar: The Legend of Korra and Voltron: Legendary Defender 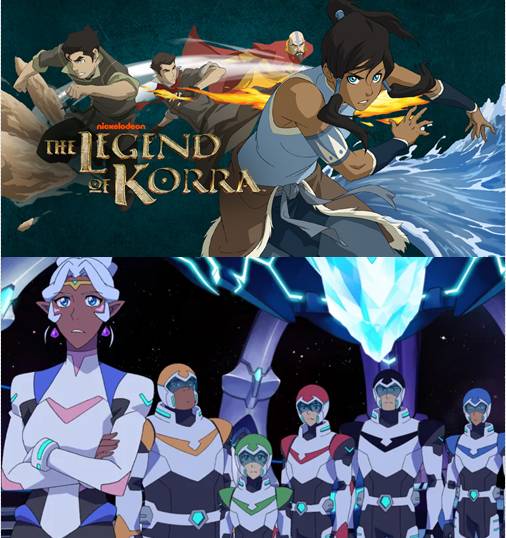 Other animations by Studio MIR

As shared by Miller (Twitter), him and Studio MIR has been doing this collaboration since 2018. This anime will focus its story around Davion the Dragon Knight as he gets entangled in events along with Princess Mirana and a powerful race of dragons called as Eldwurms. The 40-second announcement shows Davion heading into a battle against a powerful dragon. Although the announcement was short, the scenery and animation showed so much potential that has a similar vibe to more renowned anime such as Attack on Titan

On the other hand, one thing that most fans quickly noticed was the difference in voice. In the trailer, Davion’s voice resembled your usual anime protagonist, but in the game, Dragon Knight has one of the most distinct and fascinating voices. However, this may be because the story will revolve around Davion before getting his powers, so hopefully Davion’s in-game voice – Tony Todd, will be used later in the series.

For those unfamiliar with Dragon Knight’s in-game lore, Davion was a renowned dragon-slayer who found himself facing a rather ancient Eldwurm. To honor the dragon’s request, Davion struck the killing blow, but the dragon’s death has formed a bond with Davion – allowing him to gain the wisdom and strength of the slain dragon whenever he needs it.

Another massive update for Dota 2?

A Dota anime has been the talk of the community for so long due to its massive and expandable universe and even though the in-game lore is the only glimpse we have of this universe, it still shows great potential for story and world-building.

To celebrate this announcement, Dota 2’s main menu shows the banner of the anime and upon clicking it, the client will bring you to a countdown of the series premiere. 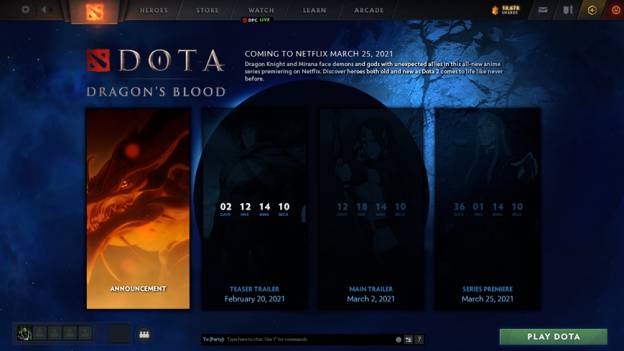 Valve has been known as a company who let their products speak for themselves, but with this anime being the first of the MOBA/RTS genre, it seems that they are planning to use this as marketing to attract new players.

For those who don’t know, there was a training mode during the beta days where you get to play as Dragon Knight while you learn the basics of the game. Fans speculate that the series premiere will also mark an in-game update of Valve’s promised new-player experience some time ago. Not only is he good as an anime protagonist, DK can also be the one to guide new players into the game. 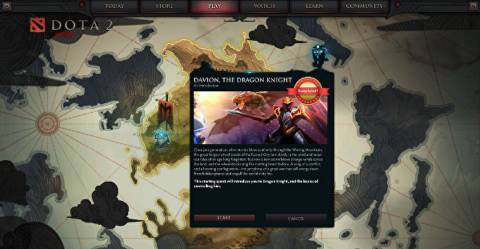 Setting the lack of marketing (except this anime) aside, Valve has been excelling in delivering cinematics and documentaries such as True Sight and Free To Play. If this collaboration with Netflix would be deemed as a success, then we may get to see more episodes and seasons surrounding other heroes such as the war between Tidehunter and Kunkka, and the story of how Rubick came to be the Grand Magus. Another dream with this success would be having all the True Sight documentaries added on Netflix so that long-time fans and newcomers will be introduced into the professional scene and its close-knit community.

What do you think of this new Anime? Will you be watching it? Share your thoughts in the comments and stay tuned for more!