Resuming the Epic League Group Stage, the fifth day of the Groups concluded with a match between Nigma and Alliance. What could have been a thrilling series became a stomp as W33 rallied his team to a short and clean 2-0 victory. 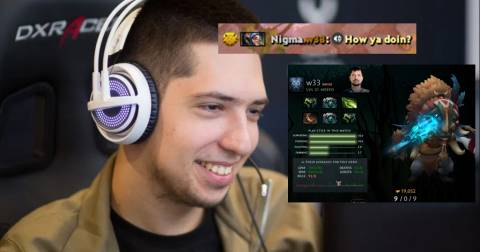 In the first game, Nigma implemented a four-protect-one draft, while Alliance took off with heavy team fight. 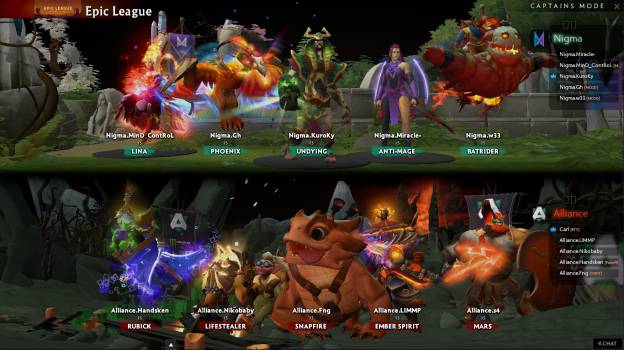 To start the game, W33’s Batrider took first blood on Limmp’s Ember Spirit and gave W33 a small advantage to secure runes and rotate. With that, he secured a Boots of Travel by eight minutes. Because of his Boots of Travel, his TP cooldown got redcued from 80 to 40 seconds – allowing him to quickly help in skirmishes.

In the next six minutes, W33 died three times, but these deaths forced some rotations that enabled Miracle to get the space needed for his Battle Fury and start working on his Manta faster.

By throwing Sticky Napalm and hitting from a distance, W33 survived and at this point, he was already 7/3/6 - contributing to 13 of Nigma’s 16 total kills.

W33 vs Limmp’s performance by 16 minutes

Nigma continued to control Alliance’s side of the map as W33 and Miracle rotated together while the rest of Nigma pushed the other lanes.

With the sustain of Mind Control’s Lina with Greaves together with Kuroky Undying and Phoenix, Miracle Anti-mage and W33 fearlessly jumped towards Alliance. With no space to comeback, Alliance called gg after 25 minutes. After his three death in the early game, W33 ended the game with the highest kill and second-best assist count as he finished with 12/3/18.

Nigma drafted the same three heroes except that the Batrider is given to Mind Control, while W33 took the Meepo and Miracle played the Ember Spirit. On the other hand, Alliance went for heavy disables and a last-pick Slark for Nikobaby.

With an active hero for Miracle, he played aggressive with Nigma while the W33po farmed in the early game. But when Meepo contributed in the fights, Alliance began to fall behind. By 14 minutes, W33 already had an Ethereal. Combining it with Phoenix’s Sun Ray and Undying’s Soul Rip, Nigma just tore through Alliance.

As the game progressed, W33 just skyrocketed his farm. At 17 minutes, he already had a 10k networth while the next highest farm at the same time was Miracle with less than 7k.

Networth graphs of the cores around 17 minutes

Without any answer to W33’s Double Skadi amplified by the Nigma’s builds, Alliance was forced to call gg at 24 minutes with a 34-7 kill score behind W33’s 9/0/9. 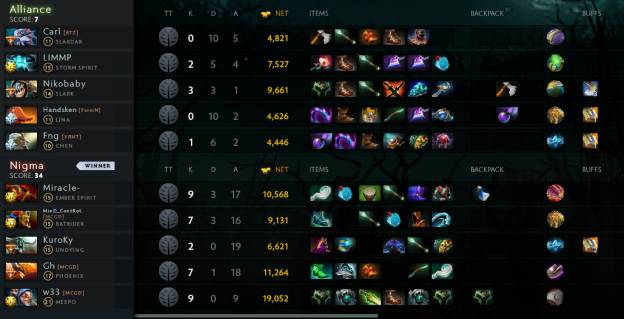 Postgame with their item builds

All-in-all, Kuroky took advantage of the heals and bursts brought by Undying and Phoenix. With an offlane hero building Greaves, W33 and Miracle can confidently go in and out of fights due to the immense amount of sustain their team has. With that concept alone, Nigma claims a clean and convincing win. This victory also became one-sided because of W33 stepping up and making better moves on the map to make up for some of his bad games in the past couple of days.

Nigma now has a 2-1 series record and will be facing Just Error today. Meanwhile, Alliance is 0-3 and will face Vikin.gg next. What do you think of W33’s performance? Share your thoughts in the comments and stay tuned for more!

下一篇：Loda on 5men disband: another team would have died for this chance