Diving into the OGA Dota 2 PIT S3 Europe, Alliance’s squad is looking on fire, after defeating team OG and Liquid earlier yesterday. At this point, Nikobaby is certainly no stranger in the Dota 2 community, yet the actions that he does to intimidate his foes are just on a whole different level.

Not to mention that it isn’t the first time Nikobaby dives so deep into the enemy’s fountain, just to secure a kill. But really, it’s obviously all part of his mind game, to assert dominance on the terrified Liquid players, as they panic their way to help their ally. 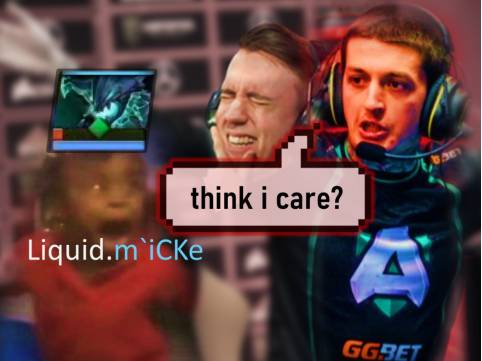 One of Nikobaby’s signature heroes, Faceless Void is such a frequent pick coming from Alliance. Hence, any foolish opponent who doesn’t respect-bans it, is just setting themselves up for failure. A horrible failure at that too.

Anyways, looking at the second game versus Liquid, it was only 28 minutes into the game. While Nikobaby has Aegis, the difference in gold lead is minimal. Yet, Nikobaby somehow decided that it would be a great opportunity to dive on the enemy Outworld Devourer.

Now, to be fair, he did use Chronosphere for that attempt. However, the damage was not enough, even after s4 used Doom on OD. Nikobaby really wanted that kill anyways and proceeded to dive deep into enemy tier-4 towers. As close as he was, his BKB eventually ran out and the rest of Liquid surrounded him to chain-stun the fool.

Unexpectedly, Nikobaby threw away his Aegis and his life for nothing but at least, he struck fear into Liquid’s minds.

Those Balls of Steel

Of course, the ‘fail’ caused quite a havoc on the Twitch chat, as viewers spammed KEKW and 322 to make fun of Nikobaby’s questionable action. However, Alliance did eventually win the second game and the entire series, so all things considered, it did served his purpose of intimidation.

What’s surprising is that Nikobaby even tweeted about what he did, probably in response to haters. He wrote, “think I care? Final boss tomorrow”. Now, that’s definitely a shocking statement and a taunt at Team Secret, who he calls the final boss. That’s rather ambitious coming from the young prodigy, assuming they could actually close up a clean series against the ‘final boss’.

Team Secret has held a long-serving winning streak since May 2020, so if Alliance would be the one who breaks their streak, then it’s definitely a big news. However, not only will Alliance need to defeat them in the upper bracket, but the final decisive series, the grand finals.

Nonetheless, let’s give Alliance the benefit of the doubt, or the underdog’s luck, is what they call. Alliance has recently secured Fng as their official member after highly-anticipated success in recent online leagues. With Fng in the line-up, I am reassured that his experience as a captain and veteran, might just be what s4 needs to make Alliance great again.

Meanwhile, at the lower bracket, it’s going to be a massacre to watch as well. Team OG fighting for tournament life versus Navi, while Team Liquid faces VP.Prodigy. Stay tuned.