Every year, the month of August is special to Dota 2 fans for the season of The International begins. We have pros and talents already preparing for the tradition, while most players are grinding out their Battle Passes.

Unfortunately, the pandemic has halted are annual event and while we wait for it, let us look back to the previous TIs. Five years ago on August 8, the Dota world saw Evil Geniuses raise the Aegis of Champions for the first time. 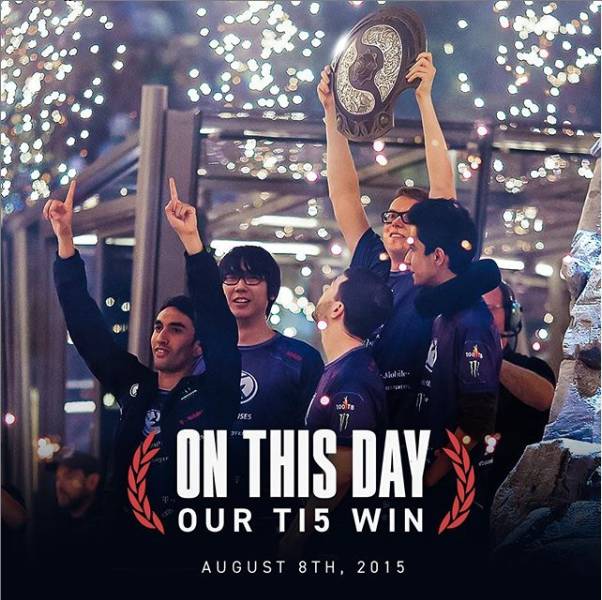 Champions in the making

Evil Geniuses embarked on the Dota scene in 2012, but their initial roster was not off to a good start as they mostly lost the tournaments they attended.

A few shuffles later, EG opened up 2014 with a new roster consisting of Fear, Arteezy, Universe, Zai, and Ppd. However, Fear’s wrist injury has restricted him from playing, so EG took Mason as a stand-in for the mid lane, while Rtz played carry.  This roster has won 4 of their seven tournaments, securing themselves an invite. Fear is still recovering from his injury, that was why he moved to a coaching position for EG on TI4. EG secured an Upper Bracket run, but in the Upper Bracket Finals, they were swept by would-be champions, Newbee. EG fought Vici Gaming in the Lower Bracket Finals, but the Chinese squad ended their TI dream and finished third. Despite a successful run with EG, Mason Venne was kicked after that TI as Fear returned to play.

EG won more tournaments for the rest of the year, but in January 2015, Arteezy and Zai left for Team Secret. Veteran Aui_2000 and 16-year old Sumail took their place as the position 4 and position 2 respectively.

The path to the Aegis

Clinton “Fear” Loomis, Syed “Sumail” Hassan, Saahil “Universe” Arora, Kurtis “Aui_2000” Ling, and Peter “Ppd” Dager opened 2015 with a disappointing career debut of Sumail as they lost Dota 2 League Season 5 in the third place. After that defeat, many doubted the Sumail after Universe asked EG to recruit him as he saw how the young mid player made a name for himself by quickly rising to the ranks of North America’s in-house league.

Going into the Dota Asia Championships, EG put its faith to Sumail once more as Ppd drafted around him. Because of this, he pioneered the Eul’s meta on Shadow Fiend that tournament.  EG finished third in their Group Stage with an 11-4 record heading into the Playoffs.  Sumail’s mid helped EG reach the Upper Bracket Finals, but lost 2-0 against Vici Gaming. However, EG defeated Secret in the Lower Bracket Finals to force a rematch against VG.

From there, EG’s took over on the first two games. Then Sumail’s 17/7/11 performance on the Storm Spirit secured the sweep for EG.

With their victory on DAC 2015, Sumail was finally recognized as one of the best mid players in the scene and became the youngest player to win a Valve-sponsored event at 15 years and 361 days old.

In the five tournaments that followed, EG finished secured three second-place and one first-place finish, securing themselves an invite for The International 2015.

Heading onto TI, EG played at a high standard as they dominated their Group with a 10-4 record, securing themselves an Upper Bracket spot at the Main Event. Evil Geniuses brushed through Complexity with a 2-0 win, and then gave Ehome the reverse sweep. However, the wild card team – CDEC Gaming, quickly swept them to the Lower Bracket.

EG dominated game 1 with a 27-8 win behind Sumail’s 10/5/7 Storm, but VG retaliated in game 2. Then in game 3, both teams fought back-and-forth, but after an hour of action, EG took the series lead with Fear Gyro and Sumail Ember taking control of the late game.

In game 4, EG gave Fear and Sumail their heroes – the Gyro and Storm Spirit. At the beginning, EG responded well to CDEC’s ganks, giving EG the early game lead.  It was looking pretty grim for CDEC, but they managed to hunt down Sumail, giving them an opportunity for Rosh and turn the game around. However, Ppd’s Ancient Apparition saw what was happening, so he casted Ice Blast into the Rosh Pit and Universe quickly followed to what we know now as the six million-dollar Echo Slam that wiped four of CDEC. From there, EG finished Rosh themselves and proceeded to close the game with a 27-9 kill score and win the series 3-1 against CDEC.

Five years later, EG’s TI5 roster has parted ways. Although EG continues to be one of the scene’s best squads, they still couldn’t find the same success that their 2015 roster achieved at The International 2015.

Their position 1, Fear remained with EG until 2018 as a player and coach. Now, Fear has moved to the position 5 so he could captain Business Associates – one of NA’s top teams. Fear and BA is competing at ESL One Thailand 2020: Americas together with their stand-ins, Envy and Sneyking.

The mid prodigy, Sumail, continued to be one of the greatest mid players, but after a fifth-place finish at TI9, he was benched by EG, but in early 2020, OG picked him up together with MidOne. But due to the pandemic, OG could not make things work with Sumail, ending his six-month stint with the organization. Now, Sumail is yet to give an update on his career.

Their position 4, Aui, was immediately kicked from EG after TI. He returned to EG in 2016, but after another short run, he joined various teams both as a player and coach. Now, he assumes the role of the captain in CR4ZY.

Their offlane, Universe, was kicked from EG on March 2016, but he also returned to the org later that year after playing for Team Secret. Meanwhile, Ppd became EG’s CEO until 2017 before he moved on to captain a few squads. Ppd and Universe reunited in Ninjas in Pyjamas this year, but due to the pandemic and lockdown, Ppd announced his retirement and three days later, Universe also followed.

EG’s TI5 squad have achieved a lot of together and surely, they will also become a part of Dota’s legends when they decide to retire from competitive play.

Who was your favorite player from this roster? Share your thoughts in the comments and stay tuned for more!

下一篇：Pudge persona and Windranger arcana, we waited too long