At the end of 2019, one of the oldest organizations in the esports field managed to rally the entire community by leaving behind everything that Evil Geniuses meant for the fans, for the players who played under their banner and even for their competitors.

The 20 year old EG circle crest was replaced with the organization name displayed in white letters in a sharp font on a black background. The "Bleed Blue" slogan was also left behind for the "Live Evil" palindrome. The rebranding was received with huge waves of criticism from most esports fans and multiple organizations began to change their Twitter logos and meme about the rebranding process to express their indignation with the new EG aesthetics. Alex Garfield, Evil Geniuses founder and former CEO, who sold the organization back in 2014, didn't hesitate to react to the image revamp.

what the fuck is this?

In a series of now deleted twitter posts, he wrote: "Clearly, some people have forgotten how and why Evil Geniuses came to be in the first place," he wrote. "And ever more clearly, the story of how and why it came to be where it is now has gone silent for too long." It's on me for being foolish enough in 2014 to sell my company to somebody who told me that an exit would mean empowerment and not negotiation, but that doesn't excuse any of the things that happened subsequently. It certainly doesn't excuse people having selective memories about those things and even trying to sweep them under the rug," he went on. Especially those who are currently tasked with safeguarding the brand and its legacy."

Evil Geniuses CGO, Phillip Aram apologized to Alex Garfield and announced that the creative team will work on a new image that would be an evolution of the old logo.

About five months later Evil geniuses are ready to introduce the new crest and new player jerseys in a rebrand that pays tribute to the organization's legacy while moving forward.

Iconic. Inclusive. Innovative. Our new Crest pays homage to those who shaped EG's legacy and serves as inspiration for our players and the esports industry as a whole. pic.twitter.com/cO6WJ2d8wt 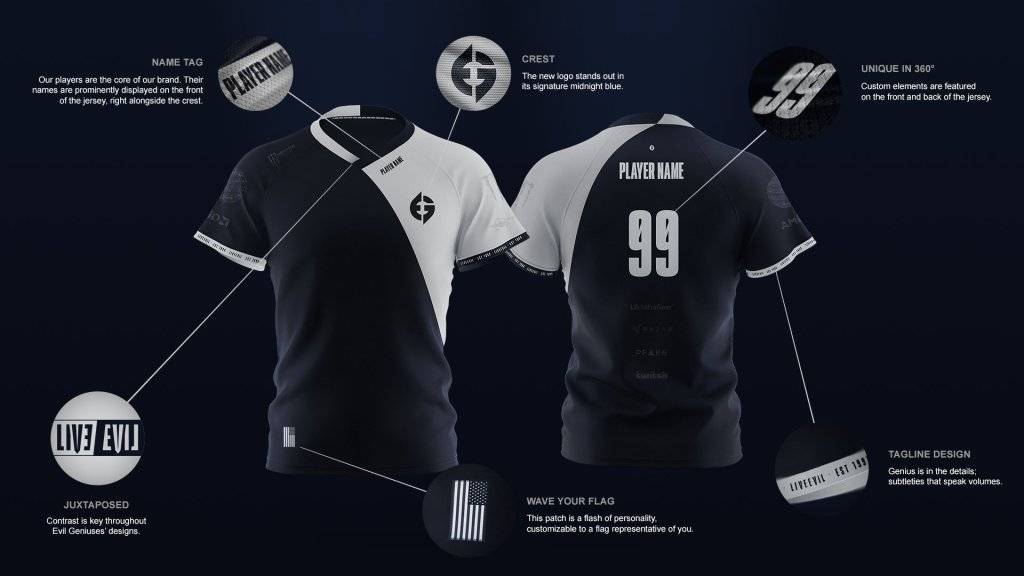 "Defined by our legacy of excellence. Shaped by our ever-evolving culture. Celebrating our new and long-standing fans, players, and partners. This new crest is symbolic of player and community individualism and breaking the margins. It honors our history while looking to the future and creating a path for competitive success," Evil Geniuses wrote in the official announcement.

下一篇：Dota 2 tournaments are live and better than ever on Repeat.gg