4&4Q is a series where we sit down with pro players to ask them 4 questions on the current state of Dota 2, and 4 questions for fun! We were lucky enough to get the newest addition to B8, Steve "Xcalibur" Ye to sit down with us for a chat.

DJWilma - In your interview with Zyori, you credited Fly and N0tail to why you looked good early in your career, being able to set you up with what you were good at. There is no question that players have strengths and weaknesses, so how do you feel B8 is measuring up to provide what you need to look better in game than before?

Xcalibur - We have unfortunately not been looking very good recently. We didn't have the best results to begin with but then roster changes started happening and I guess it got worse. The problem with losing official games over scrims is that you start questioning things you believe in and we started doubting things that also helped us win games. We had some pretty good games versus the good teams in the ESL tournament where we definitely had chances to beat them with some more practice. But with huge losses people loses trust in each other and you lose the mental game and it only gets worse.

- Follow up to that, the broadcasting talent has mentioned that B8's weakness seems to often be found in the draft and not in the inherent skills of the players. Vikin.GG most recent success weighed heavily of the drafting ability of their coach. Do you feel the team could benefit from a coach, and in what ways would that help?

- I'm not sure if it's true that we mostly lose on draft, I think it's more that we don't know how to play our draft perhaps. Sometimes the draft looks weak because we are not playing the drafts properly. We haven't played much together and honestly all these official games we've played are more like scrims because we have not been able to scrim much so we're not able to play our draft effectively. I'm not really involved in the drafting process because we don't want to mix ideas so I don't think too much about it. Xcalbiur during his time on Fnatic with EE - copyright ESL

- B8 has recently been trying out the Greek duo of SsaSpartan and Skylark, to change things up with the roster. With all your experience on various teams, what is it that is missing? What does B8 need to fix to start securing wins in these series in your opinion?

- We need time and we need to practice to play in a certain way. Right now what I feel is that we're all over the place and we're just playing randomly. We need to get some kind of system going so we're feeling more comfortable when playing but right now I think we're mostly just playing on instincts which makes it inconsistent. We also need a break to reset mentally because it's very hard when you lose a lot of games in a row and it leads to you losing the mental game.

- There is currently a large focus on the EU/CIS scenes, being the most saturated with competitive talent. Ninjas in Pyjamas even moving back to Europe during ppd's tenure to remain competitive on the global stage. The recent regionalization of the scenes could create even larger gaps of skill versus the rest of the world. Having played in various regions, what sort of impact do you think this isolation will have? Who will be the biggest winners and losers once we all come back to international LANs?

- The stronger regions are still going to be stronger because of better practice, when you lose you start improving what you are doing and you get better but when you are winning you easily start to get complacent and you stop improving. China and Europe will probably still be the strongest but these kinds of isolations will probably also create their own metagames and then we'll have to see whose metagame is the strongest when there's LANs again. Xcalibur with a photoshopped jersey

- Now on some less serious topics, what has been your most memorable moment in your Dota 2 career?

But the moment I felt the best was probably when we beat Alliance 3-0 at D2CL in 2014. Alliance had just won Dreamleague, where we lost pretty badly, and my confidence was not the best. I managed to play my comfort heroes and we managed to win the series. It was also my first series win if I remember correctly, we had taken games but we never won a bo3 before that.

- What do you find yourself doing outside of Dota 2, especially during the COVID-19?

- I recently found a hobby which is bouldering and I only managed to do it for approximately a month before COVID hit. For years I haven't had a hobby outside of Dota so being in quarantine wouldn't have been a problem but nature decided that I should stay home, so it's all my fault sorry guys!

During COVID it's business as usual. I don't really play much other than Dota, but because of the quarantine some of my friends have been staying at home more often and I've played some Counter-Strike with them. 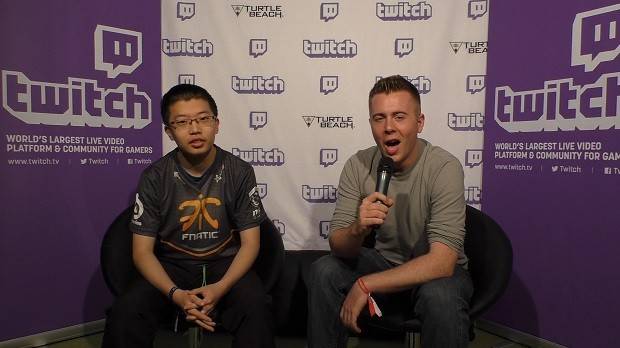 Xcalibur after defeating Alliance at D2CL in 2014

- About things bad for our health, what is the most toxic thing that has ever happened to you in a pub game?

- It's hard for me to recall because there's way too many instances of it happening and it's not really sticking to my mind anymore. The most annoying thing though that consistently happens are low ranks first picking core roles. It should be an official rule that the higher ranked gets to pick their roles and role stealing should be a reportable offense.

- Thanks for taking the time, any shoutout, plugs, or last thoughts you want to share?

- Thanks for the interview. Shoutout to my team B8 and our sponsor rivalry and my fans. Really sorry for the results recently, it has not been easy for us, but we'll bounce back! Also if you guys are interested I stream high ranked Dota on Twitch www.twitch.tv/xcaliburye pretty consistently.

Xcalibur early in his career