Rumours that Heroic were in talks with René “TeSeS” Madsen have proven correct, as the Danish organisation have announced the addition of the promising 19-year old to their roster. Heroic are now just 1-man short of a full line-up, with  Nikolaj “niko” Kristensen expected to be the final piece.

TeSeS has moved from Copenhagen Flames, a team he joined in November 2019, and with whom he won the $90,000 United Masters League Season 2 in January. However, his standout moment thus far was most likely his appearance as an uncontracted stand-in for OpTic Gaming at the Dreamhack Open Summer and ESL One New York in 2019.

“We’re very eager to get going again with the new roster, and Rene really fits what we are looking for right now. Young, great aim, very versatile,” said Erik Askered, Heroic’s CEO.  “He’s been a player I’ve looked on as up and coming for quite some time and it feels great to have him as a part of our team.” 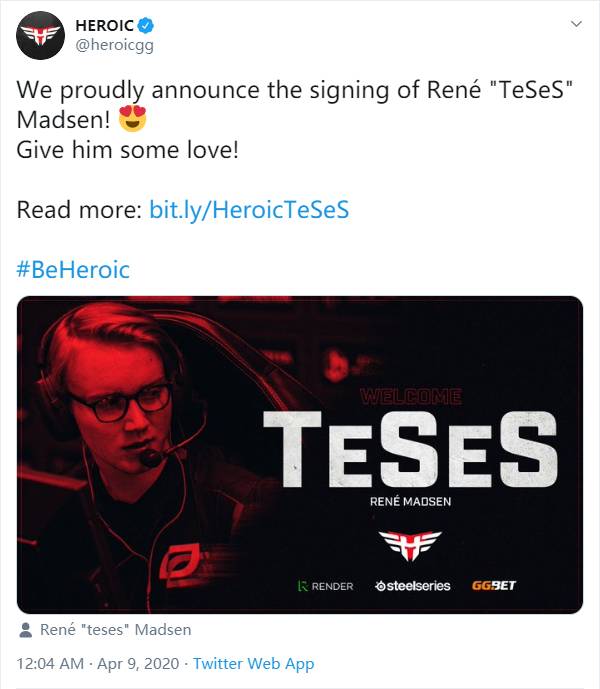 Copenhagen Flames confirmed the news on their website, while also announcing the deal was “a new record sale”, and proved “we can take players and make them interesting to the teams above us in the ecosystem”.

“I am extremely thankful to Copenhagen Flames for giving me a chance to prove my worth,” said TeSeS in the team’s official post. “I’ve been happy to play with the boys on the team and wish them good luck in the future. Without the boys and the people behind Flames I wouldn’t be where I am today. Now I’m looking forward to taking the next step in my career with Heroic.”

Following the addition of TeSeS, the Heroic line-up is: 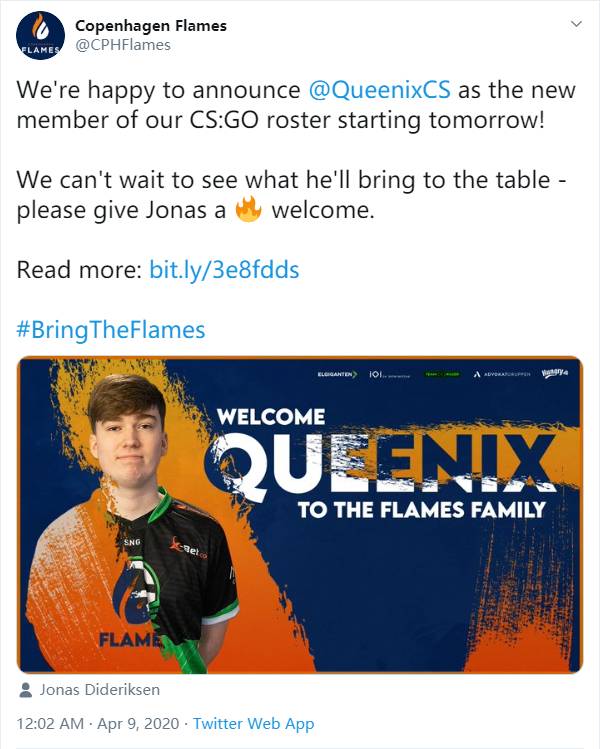 Jonas “Queenix” Dideriksen will be joining Copenhagen Flames to fill the void left by TeSeS, after being transferred from Singularity.  Despite showing promise, Queenix is still learning the ropes, and will be quite a fresh face to regular top flight competition.

“We’ve been aware of the possibility of René (TeSeS) for a short while and have used that time efficiently to scout the best suited replacement and we are thrilled to have the opportunity to bring Jonas into the fold,” said Daniel Vorborg, Copenhagen Flames’ Director of Esports.

Vorborg also commented that although Queenix is “new to this level of play”, that they believed in his raw mechanical skill and impressive aim.  “We will work with Jonas on developing his understanding of the game, and his abilities to use his aim to secure rounds for our team,” said Vorborg.

Vorborg went on to say to Copenhagen Flames supporters not to worry about the team’s level of play following TeSeS’ departure, using the team’s success after selling Fredrik “roeJ” Jorgensen to Tricked as proof they can still come back stronger.

Copenhagen Flames are one of the 16 teams set to take part in the Road to Rio qualifiers, taking place from April 22nd to May 17th.