TSM come back to beat 100 Thieves in LCS Spring Playoffs

TSM come back to beat 100 Thieves in LCS Spring Playoffs

It was far from pretty, but TSM fought their way back from a 2-1 deficit to beat 100 Thieves in a wild five-game set and move on in the 2020 League of Legends Spring Playoffs.

From their first game of the split against Immortals, an hour-long affair that spawned the “TSM late-game” memes, TSM were rarely able to shake that narrative across their games. At their best, it becomes apparent how they were the only team to beat Cloud9 this year, but inconsistency in closing out games saw them limp to a 9-9 record and a five-seed in the playoffs.

Game one against 100 Thieves was a clean, methodical win for TSM with only a slight glimmer of hope given to 100T in the mid-game before Bjergsen’s Corki led his team to a win.

Despite the result, 100 Thieves decided to run back the exact same draft and bans for game two, and TSM mirrored their opponents obligingly. 100T coach Anthony “Zikz” Gray’s gamble paid off. The “salty runback” saw TSM, one of the best early-game teams in the LCS, down 100 gold at 15 minutes, and from there it was mid laner Tommy “Ryoma” Le’s Orianna that did the rest, bulldozing TSM into their base for an easy win.

TSM drafted another early game composition in game three that put top laner Sergen “Broken Blade” Çelik on Pantheon and jungler Joshua “Dardoch” Hartnett on his signature Olaf. Everything was going according to plan as both got ahead early, until TSM’s curse reared its ugly head. Ryoma picked up three kills on a fight in the bottom side river on Viktor that his team snowballed into a dragon and the first turret of the game. After a Baron fight that 100 Thieves turned thanks to a Chaos Storm-Bullet Time combo from him and Sun “Cody Sun” Li-Yu’s Miss Fortune, they sailed to a victory, putting themselves one game away from ending TSM’s split.

With their backs against the wall, TSM doubled down on their early-game composition, hoping to not even allow the game to get to the later, more “throw-able” stages of the game, and executed flawlessly, winning game four by a kill score of 13-1 in 30 minutes, led by Broken Blade’s dominant Kalista top performance.

In the decider, TSM opted for comfort. They went with the Xayah-Rakan combination in the bottom lane that they were previously undefeated on this split. 100 Thieves top laner Kim “Ssumday” Chan-ho bounced back from an otherwise lackluster first four games by building a big early lead on Sett over Broken Blade’s Gangplank. William “Meteos” Hartmann also got ahead as Sejuani early on, but this time around it was the Thieves that struggled to close out the game despite building up a sizeable lead by the 15-minute mark, allowing TSM to capitalize on them winning the CS battle in every lane, and staying within 2k gold as the game dragged on past 30 minutes.

It came down to a fight around Cloud Drake on Soul point, which TSM won and pushed into the 100T base. Cody Sun, back on Miss Fortune, was the last hope for his team and mowed down everyone but Bjergsen’s Zoe with one last Hail Mary Bullet Time deep in his own base, but the face of TSM’s franchise was able to barely pop the nexus to end the game and the split for 100 Thieves. 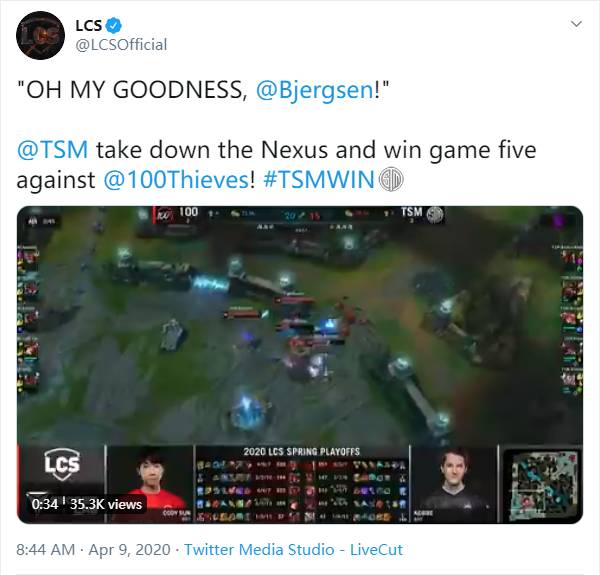 In their wins, Bjergsen went a combined 12/1/22 and had a kill participation rate of over 80% on his way to a well-deserved Player of the Series award.

Meanwhile, for the Thieves, the 2018 reunion tour comes to a heartbreaking end despite a phenomenal second half of the split and a lot of promise and improvement shown by the likes of Ryoma in the mid lane. If they can maintain their trajectory, they should find themselves right back in contention for a Worlds spot some Summer Split.

The only team that took a game off Cloud9 all split, TSM will take on FlyQuest as losers’ bracket action rolls on Sunday at 3 p.m. CT, the winner of which will face off against the loser of Saturday’s C9-Evil Geniuses matchup.