RAMZES666 gets called out for toxicity, apologises later

RAMZES666 gets called out for toxicity, apologises later

EG's offlaner Roman "RAMZES666" Kushnarev has not been one to mince his words in Ranked Games. The player has had arguments with multiple pro players including Per Olsson "Pajkatt"  Lille and popular streamer Mihai "canceL^^" Antonio.

The player looks like he has continued to express his frustration at multiple players in his Ranked Games. A post by Reddit user /u/CISjusticewarrior pointed out RAMZES666's toxic behavior in one of his ranked games.

The player also verbally abused former Vega Squadron player Dmitriy "Fishman" Polishchuk in his stream causing the player to break down at the end of the stream.

Following this incident, the EG offlaner apologized to Thug on Twitter.

However, one must remember that this is not the first time RAMZES666 has apologized for his behavior in Ranked Matchmaking. The player also apologized earlier last year after he was called out for his toxicity, as a direct result of Ceb's comments against Russians. 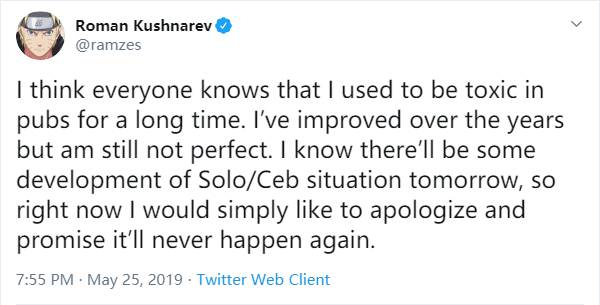 Unfortunately, many professional players still do not understand that they've become role models thanks to their popularity amidst the Dota 2 community and hold a certain amount of influence over their fans. The fact that they continue to act immature will only cause the player base to become even more toxic in the coming days.