Yesterday, Group B presented us with some quality Bo3s and comebacks. Today, day 5 of ESL LA Online EU/CIS Division is filled with unexpected twists and upsets, where B8 managed to secure their first victory and Vikin.gg knocked down the mighty OG with an overwhelming Alchemist. 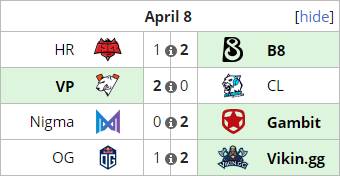 An Armlet fail kills the momentum for HellRaisers

After losing game one to a TerrorBlade draft and a hyper active support Mirana for Funn1k, they were presented with a huge opportunity in game two.

HR continued with Winter Wyvern and Mirana while this time they give Funn1k a Batrider. Twelve minutes into the game HR were holding a nearly 2k gold and experience advantage, despite the fact that xannii's was yet to find a kill on his mid lane Huskar. Once he got his Armlet completed, HR went for what should have been the game-winning move and decided to attempt an early Roshan to place the Aegis on Huskar and start the aggression. But an unlucky bash from Rosh caught Huskar with his Armlet off and killed him, allowing B8 to quickly come and contest the attempt. HR lost four heroes in the fight and the Aegis went to Excalibur’s Dragon Knight. From there on HR were picked off time and time again, lost their towers and found themselves trapped in their own base and forced to a decisive game three. 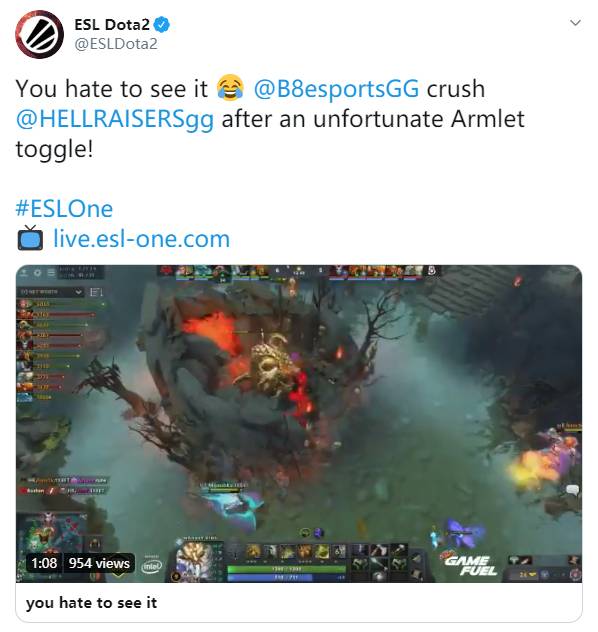 Unfortunately, the game two disaster seemed to have damaged HR's focus, and while they were aligning big ultimates combos with a late game Anti-Mage plan, B8 were allowed to pick fast pace heroes with great pushing power. HR’s post draft response to B8’s offlane Pugna and mid lane Lycan came with lane swaps between their Mars and Puck, but it wasn’t enough to stop the push. Lycan had Necronomicon 3 only 10 minutes into the game and B8 were able to take down the objectives in a super-fast manner to force the GG call by the 20-minute mark.

Coincidentally, all three series for VP have been against CIS teams, perhaps the first sign of the organization returning to being the kings of the region. Game one saw VP pick up one of Zayac’s signature heroes, the obnoxious Techies, along with no[o]ne’s iconic Invoker. Cyber Legacy, wary of the techies, picked up a fast Necronomicon 3 on their core Dazzle, using the hero’s strong sustain to push up early.

Perhaps the best sign of VP finally feeling like themselves was some classic bad manners from the CIS squad. VP proceeded to close out the game cleanly.

For the second round, VP’s Resolut1on was the star of the show. As the only preseason recruit to remain with the team so far, his transition to the offlane role hasn’t been the smoothest. For this game, the Ukrainian looked like he’s been playing position three for his entire life. 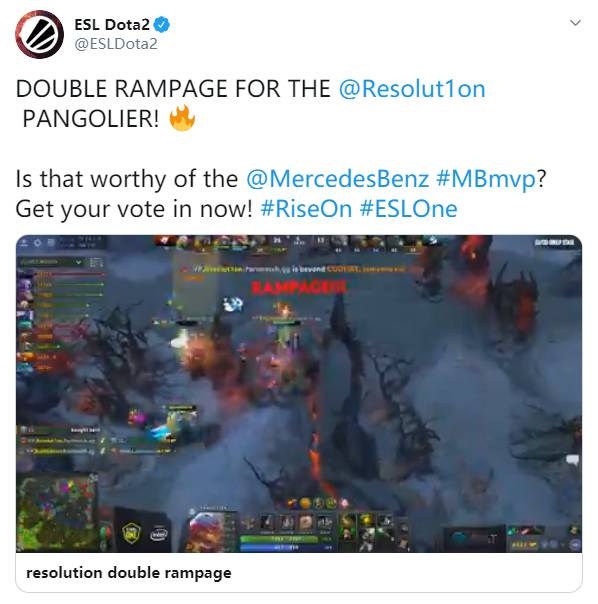 Despite being forced to solo his lane due to VP’s decision to pick a greedy Enigma support, Resolut1on’s Pangolier survived the laning stage with zero deaths and even managed to get a solo kill on the opposing support. His impact snowballed from there, culminating in a double Rampage to cap off his phenomenal performance.

While the games weren’t as fast as some of their other losses, Nigma never had a commanding grasp of either matchup, leading to Gambit pulling away late in game one and absolutely dominating game two.

Even with Miracle- on Ember Spirit and gh on Earthshaker, Nigma could only do so much to keep map control and hold off the powerful Morphling and Lycan core from Gambit. Their heroes actually scaled well, but the CIS team had the superior late-game teamfight, which led to a big swing 25 minutes in. KuroKy’s Chen was less effective than the team hoped. The fight control that Gambit had with Pangolier, Weaver, and Grimmstroke eventually outpaced Nigma’s early strategy. Gambit’s 29-15 turnaround victory gave them a lot of confidence heading into game two. Fng first picked his own Grimmstroke again after it put in work in the opener, followed by putting dream on Ember Spirit. It ended up being Miracle-‘s Leshrac and w33’s Outworld Devourer standing between Nigma and a quick demise when the European team tried to run an odd lineup around a first pick Io. Gambit killed Kuro three times in the first five minutes. That spiraled into 26 kills through 20 minutes and a growing lead as dream and gpk dual laned to crush Nigma. The pair combined for 34 kills and more than 100,000 hero damage with their Ember Spirit and Death Prophet.

Following a lost teamfight at the 25-minute mark, Nigma were never able to get all of the kills needed to turn things around. They rallied once more and put a dent into the massive net worth lead Gambit held toward the end of the game, but that push was quickly stomped out and the CIS team completed the sweep.

OG fall to an unexpected foe

OG dropped into game one with a core of Terrorblade, Tidehunter, and a position three Phoenix, which absolutely decimated Vikin.gg in the late game. Shad put up a good fight with his Lycan and Tobi's Timbersaw dealt some good damage, but they couldn’t hang with the output coming from OG. 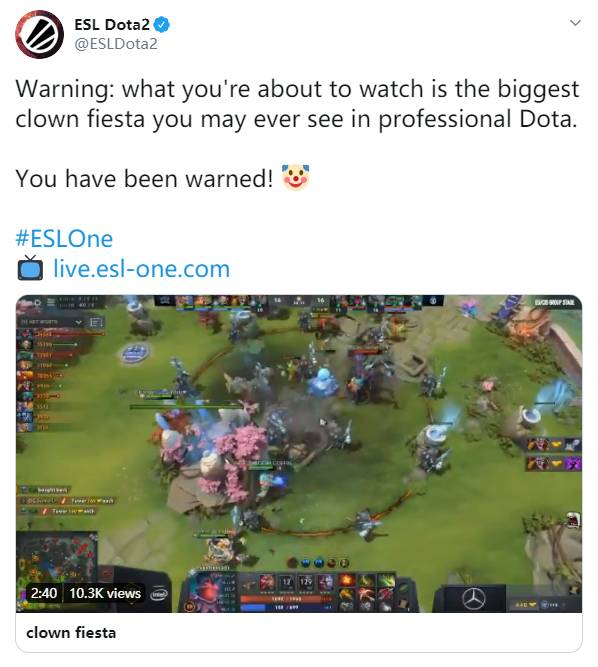 Both sides kept the match competitive, but SumaiL put things away late. In one teamfight, he was able to deal more than 28,000 damage and essentially end any hope Vikin.gg had of coming back. The final battle was hard to follow, but OG managed to sustain through an elongated push into the enemy base to seal the deal after cleaning things up and diving back in.

With Vikin.gg, most expected OG to play the meta and try to secure a sweep and better their position in the standings. Instead, the team opted to pull out some odd picks like a second pick Riki for SumaiL. Vikin.gg decided to scrap everything but the Snapfire, picking up an Alchemist/Dragon Knight core in hopes of scaling well late in the game. The players were eager to fight early. This resulted in a large number of kills in the first 20 minutes, with OG pulling ahead slightly following two massive teamfights around 15 minutes. They followed that up with a strong defense that landed them a dieback on Shad’s Alchemist and opened the door for them to make some moves. But despite holding the kill advantage and having that opening, Vikin.gg shrugged it off because they were still farming at a strong pace to win late. The Alchemist became too strong for OG to handle and the timing from every other Vikin.gg player was spectacular, particularly from captain Seleri.

Game three saw OG pick a powerful duo in Oracle and Troll Warlord, but they gave up Vikin.gg’s highly-coveted Snapfire and a second-to-last pick Alchemist, which went straight back into the hands of Shad. OG was in a much better position to contest Vikin.gg throughout the entire game this time, but the farm scaling still heavily favored the underdogs while Shad built toward another massive late game. Vikin.gg led for most of the game, but even after falling behind, OG kept up the fight. It wasn’t until the final minutes when OG overcommitted to a fight and were brought down to just two players. Shad and his team rushed the mid lane and pushed the high ground. The Alchemist made short work of the final towers and then beat down the throne. Ceb and n0tail could do nothing without their cores. 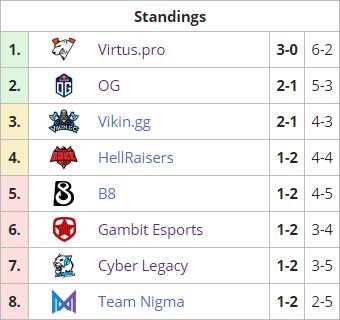 This marks OG’s first dropped series of the entire tournament, while Vikin.gg now improve to 2-1, sitting in third place in the current standings behind the team they just beat. Gambit also secured their first series win of the tournament while Nigma lost their second series and dropped to the bottom of the Group A standings. VP now sit on top of Group A with 3 wins.

下一篇：MidOne: 10k mmr players lolz none of them ever won Ti