After three quick matches, FlyQuest has taken down Golden Guardians, which makes the Guardians the first team eliminated from the 2020 LCS Spring Playoffs.

Each game was pretty lopsided for FlyQuest—Golden Guardians couldn’t find many great venues for success, and their macro just wasn’t good enough to stand against the firepower of their opponents, mainly in the mid lane. Tristan “PowerOfEvil” Schrage was a monster in the series, collecting an incredible 21 kills, 19 assists, while only dying once. PowerOfEvil has looked decent over the past couple of years, but his performances this season have been essential to the success of his team. For example, today he had over 80 percent kill participation in each game, and great KDAs as well. “Everyone on the team wants to play together, wants to compete, and be successful,” PowerOfEvil told Dot Esports after his series. “I feel like we have all this passion to do our best and thrive—hopefully, we can keep it up.”

FlyQuest will now look towards the second round of the losers bracket, where they will await the victor of 100 Thieves’ match against TSM. That matchup should be interesting to watch since TSM has shown plenty of inconsistency in their play, but 100 Thieves is coming off of an abysmal series performance against Cloud9. 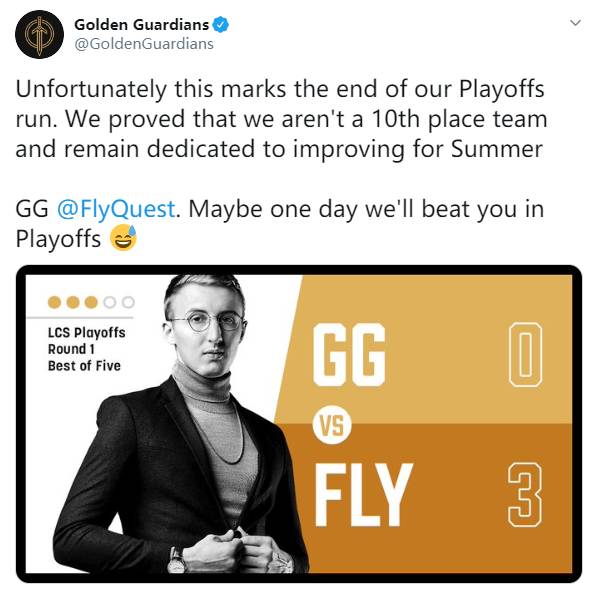 On the other side of the Rift, Golden Guardians will regroup and recharge for the 2020 Summer Split. They had a surprising run to the playoffs this season, but they might need to consider making some adjustments to their gameplans, roster, or coaching if they want to go farther in the postseason next time.