Yesterday, Group A had some pretty interesting Bo3's and now, Group B concluded Day 4 with even better Bo3's and series comebacks at the ESL LA Online EU/CIS League.

With a mid Bristleback, Unique shut down the farming game of the enemy Medusa while the Creep and Skeleton Army of Chen and Wraith King tore through Team Spirit's towers. By 16 minutes, the pushing lineup of Unique were already smashing high ground to force Team Spirit to call gg at 19 minutes.

For the last game, the Phantom Lancer and Nature's Prophet duo took over the 48-minute, 33-34 victory. The kiting from Team Spirit allowed them to take advantage of Unique's teamfight-oriented draft. With a bait from Ergon's NP, Team Spirit took the 4-1 trade and win the series behind Ergon's 15/4/14 and Misha Chen's 26 assists.

In the first game, a very aggressive Na'Vi opened game 1 against Chicken Fighters' Meepo and Riki carry. The teamfight and disables from Na'Vi forced Chicken Fighters' to call gg at 27 minutes with a 27-10 kill score behind Magical Shadow Fiend's 14/1/7.

For game 2, Chicken Fighters mounted a 45-minute comeback against Na'Vi's pushing draft. Na'Vi were not able to siege high ground as Charlie Terrorblade heavy-hitting carry kept them away as they won fight after fight. After taking the lead and securing the Aegis, Chicken Fighters evened the series behind Charlie's 32k networth and 15 assists each from three of CF.

The last game was a battle of Naga and Phantom Lancer carry, but Crystallize PL from Na'Vi was helped by Magical and an offlane Ember. With kills all over the map, Charlie's Naga was unable to secure enough farm to carry the game. At 44-18 kill score at 40 minutes behind 11 kills each from Magical and 9Pasha's offlane Ember, while CematheSlayer Grimstroke tallied 28 assists to give Na'Vi the series win.

To open the series, Liquid played a safelane Storm on Micke and Lone Druid on Qojqva that took advantage of the weak early game brought by the Bounty Hunter and Chen support for Alliance. With rotations and solo pick ups, Liquid just ran at Alliance to win game 1 at 26 minutes with Liquid combining for 25 kills.

For game 2, Alliance bounced back hard with their very aggressive draft. Early game rotations and pushes allowed Alliance to prohibit Lifestealer from farming. And 18 minutes in, Alliance dives towards high ground to force Liquid to call gg. S4's Nature's Prophet, Limmp Templar Assassin, and Nikobaby Ember Spirit combined for 17 kills, while Handsken Earthshaker tallied a clean 0/0/15 over their 19-2 kill score to even the series.

In the deciding match, a last pick WK for Nikobaby gave Alliance the needed edge over Liquid's teamfight. In the first 15 minutes of the game, both teams were even, but as map, as Nikobaby got his Radiance and Blink, Alliance began to take over with fights and pushes led by Limmp Death Prophet. With the late game Aghs on WK, Nikobaby jumped into 3 to secure a 4-0 trade and clinch the series at 28 minutes. Limmp DP finished with 11/2/6 while S4 Mars contributed 12 assists to their 21-9 series win.

Unlike the first three series, Secret ended day 4 with a quick and convincing sweep over NiP. For game 1, Matumbaman's WK led Secret together with a mid Pangolier to claim game 1. The 24-minute, 27-9 victory is behind the pushes and pickoffs taken by Secret onto NiP's late game draft. With 10/0/8, Matu sealed the series lead while the rest of his team claim more kills.

With a last pick Alchemist and a support Nature's Prophet, Team Secret easily wins the series in a 22-minute bloodfest. NiP's teamfight draft was able to claim kills on their own, but the 15-minute Radiance and Heart on Alche seemed to be enough against the Naga carry. With the four-protect-one strat, Team Secret knocks down two sets of racks and went for T4's to force NiP to call gg at 32-18 kill score behind Matu's 9/1/10 on Alch and 17 assists on Nisha Pangolier. 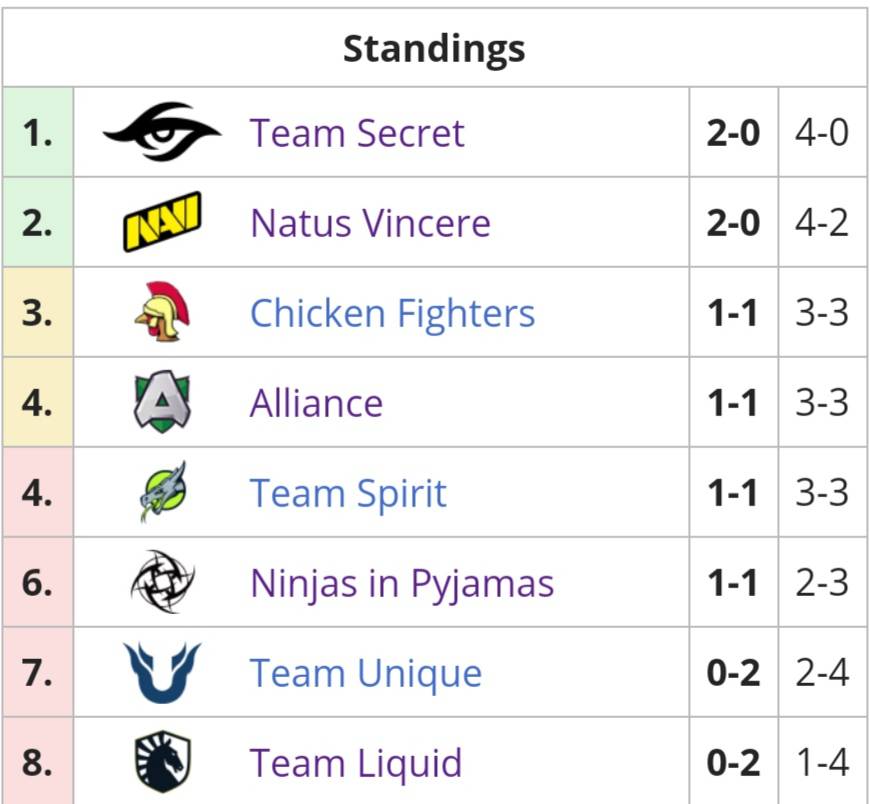 As expected, Team Secret remains undefeated to lead Group B with 4 wins, while Team Liquid staggered at the last spot with 1 win and 4 losses, while S4 and Alliance takes the 4th place with 3 wins and 3 losses. Can they continue to hold on to this spot until the Playoffs? Share your thoughts in the comments and stay tuned for more!