Quarantine and Regional Leagues led by the current global pandemic are causing more roster changes. While they are doing well in the EU/CIS Division of ESL LA Online, NiP is currently fighting with two stand-ins: MiLAN and RAMZES666, while UNIVERSE and Lelis probably under self-quarantine in their homes.

In light of the geographical barrier caused by COVID-19, the decision came early this morning for NiP to release the legendary player Saahil "UNIVERSE" Arora from the roster. 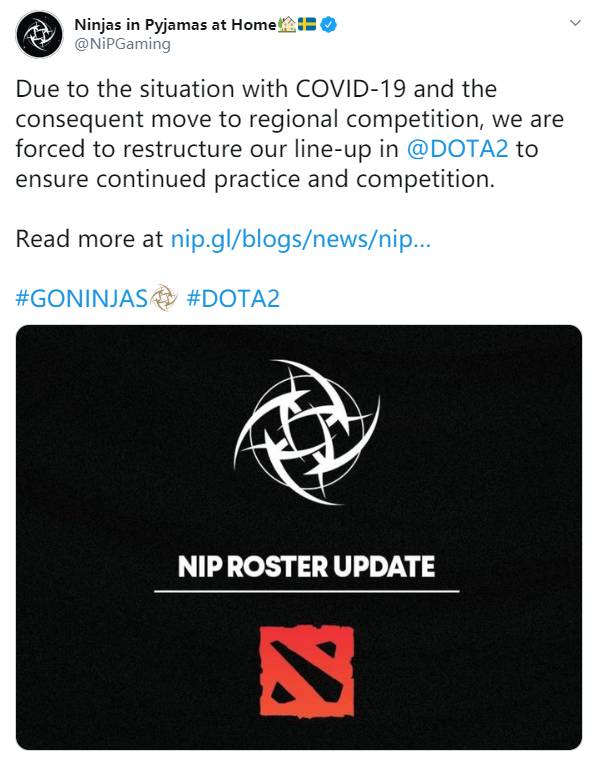 Here is the official statement:

Due to the situation with COVID-19 and the consequent move to regional competition, we are forced to restructure our line-up in DotA2 to ensure continued practice and competition. Therefore, we have to make the tough decision of releasing Saahil "UNIVERSE" Arora from the roster.

A fundamental part of our DotA 2 strategy is to build towards a core of players that can last way beyond the short term TI cycles. We're getting closer to that goal but we still have some ways to go in terms of finding exactly what works for us and what we are trying to achieve.

The prevailing situation in competitive DotA forces us all to reevaluate how to run a team and requires a more regionalized approach for the foreseeable future. Saahil has been a loyal and solid player for NiP, and any team would be lucky to host his commitment to the grind. Good luck, Saahil. It’s been a pleasure to have you with us.

"We'll keep searching for the right lineup, with the right combination of hunger, skill and winner mentality, while further applying our own vision of performance culture to it. DotA2 is a game and community we believe a lot in, and we're excited to see what the future brings, with all the potential changes coming." - Jonas Gundersen, COO of NiP

The current roster of NiP: