Thrilling endings and exciting series wrapped up the third day of the ESL LA Online EU/CIS Leagues. With three matchups going game 3, this day almost delivered some upsets on Nigma and OG. Let us take a look at how each series went.

HellRaisers sweep Vikin.gg with a base race

The opening series had both teams trying to outmaneuver the other's teamfight combo. But a surprising Right-click build Queen of Pain from Xannii helped HR defend high ground and slowly began their comeback win in 40 minutes.

For game 2, both teams were pretty much even until the 40-minute mark, but HR began to pull away as the Nix Morphling with Skadi, BKB, and Daedalus at 45 minutes ripped off the teamfight of Vikin.gg. However, Vikin.gg did not go down without a fight as they pushed past top to expose the throne. The game went down to the wire but HR won the base race after 67 minutes of action behind Nix's 15/2/9 and Miposhka Disruptor with 29 assists.

With a 51-18 kill score by 32 minutes, Nigma takes a very convincing game 1 win over CL's Phantom Lancer, Death Prophet, and Mars cores. Nigma ran at them and did not stop to prevent the cores from recovering. Miracle on Ember Spirit finished with 24/3/18 and a deep Rampage on Cyber Legacy's base while Mind Control Dark Seer recorded his own Ultra Kill and 36 assists to take the series lead.

Cyber Legacy cleanly played game 2 led by Bignum Earth Spirit who tallied 25 assists. Cyber Legacy controlled the pace of the game with their chain disables against Nigma's pushing draft. In fights, the initiations from LastHero Centaur allowed CL to take down the backline and shut down the ratting of MC Nature's Prophet. After catching Miracle Jugg in the late game, Cyber Legacy just went for the Throne and evened the series at 37 minutes.

In the last game, both teams just traded kills and went pretty even with pretty much everything. However, Cyber Legacy's teamfight draft went to full play when Palantimos Spectre had Radiance and Manta to take lead. But Nigma's spell usage and kiting allowed them to win the next few fights and eventually win the game at 43-32 behind Miracle Riki's 17/6/19 and Kuroky's Keeper of the Light with 29 assists at the 47-minute series win.

In game 1, Virtus Pro had the control, even allowing NoOne Storm complete his Bloodstone by 19 minutes. However, they found out that the Bloodstone mana regen bonus didn't work, but they still managed to take a steady lead. But in the later stages of the game, it was hard to play without it. And after Gambit securing a 4-1 trade, they finally engaged in a fight that forced VP to call gg.

For game 2, Virtus Pro quickly stomped HR with better teamfight execution. Although HR had the better initiations, the outcome of the fights still did not favor them because of NoOne Invoker's contribution to the fights. With 9/1/4 on iLTW's Slark, he helped secure VP this fight and eventually win the game at the 26-minute mark.

With a 27-4 kill score, VP were absolutely relentless towards HR's as Resolution's Axe interrupted any attempts of good combos from HR while VP dealt massive damage. And with this teamfight, HR finally succumbs to VP's domination and called gg at 23 minutes behind Resolution's 12/2/9 while iLTW's Ember Spirit recorded 14 assists.

According to dota statistician, Nahaz, 33's game 1 against B8 makes him the fourth player since TI5 to secure a 9.5k at 16 minutes and was the only was to do so without the game ending yet. 33's combos such as this one, where he Vacuum and Walled three of B8 into the stun of his dominated Centaur Creep gave OG the winning teamfights. Even though B8 showed signs of life, a late-game Rapier on Sumail Gryo finally closes the deal in OG's favor.

Even though OG had a clown draft with an Ember pos 5, B8's cores still stepped up to avoid the sweep. Together with Dendi's Queen of Pain, Xcalibur Meepo gave OG a hard time dealing with them and after 42 minutes of action, OG calls gg at 29-33 kill score behind Dendi's 12/3/10 and 22 assists from LeBron Chen.

For the last game, B8 had the networth lead and early game advantage, but their draft was not enough to siege high ground as the tanky lineup of OG held them off. But with another Rapier purchase on Sumail Gyro, things went south quickly for B8 as OG  went for mid and forced down the Throne. OG wins the series at 18-21 in 42 minutes behind Sumail's 7/3/5 and 14 assists from Notail's Earthshaker. 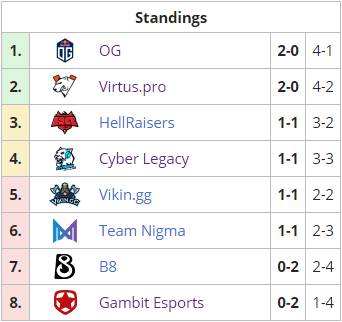 After today's matches, OG comes out on top of Group A with 4 wins and 1 loss, while Gambit is surprisingly at the bottom with 1 win and 4 losses. Can the top 4 teams hold on to their spot until the Playoffs? Share your thoughts in the comments and stay tuned for more!

下一篇：EE-sama: I will remember this for the rest of my life