MAD Lions shocked fans, pundits, and their opponents themselves by knocking down defending LEC champions G2 Esports down to the lower bracket of the playoffs in a five-game series that will go down in history. MAD took the match to all five games and came on top after a heart-stopping game 5, earning themselves a minimum top 3 finish in the split.

MAD Lions’ success against G2 today came largely thanks to the extraordinary performance of their three rookies: jungler Zhiqiang “Shad0w” Zhao, and bot laner duo Matyáš “Carzzy” Orság and Norman “Kaiser” Kaiser. Shad0w’s Gragas and Carzzy’s Kalista were instrumental to MAD winning game 1 and setting the tone of the series. In Game 3, Carzzy and Shad0w were at it again, the former playing a pitch-perfect Ezreal and Shad0w showing Marcin “Jankos” Jankowski that he too can play a top level Lee Sin, ending 5/0/7.

The experience and composure of G2, however, allowed them to stay in the series until the final game. The “samurai” were losing the early/mid game in game 4 to MAD’s aggressive Renekton/Leona/Elise composition, but they needed exactly one team fight to turn the game around and tie it 2-2. 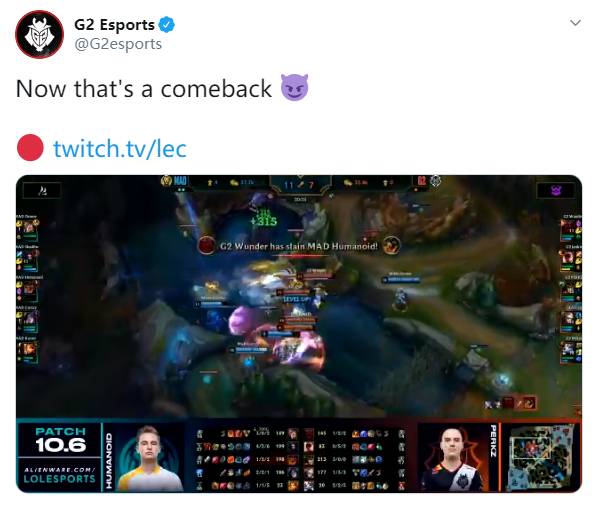 The insanity of Game 5

Nothing in the first four games could compare to the mayhem of the final game, however, and there were too many great individual events in it to narrate it in full. The game swung back-and-forth with MAD Lions putting up a fight, despite drawing a bad match-up top, giving away Kalista to Martin “Wunder” Hanssen.

Then, in the most important game of his career, Shad0w pulled off an Olaf performance that brought G2 to their knees, becoming an unkillable terror on the Rift. In 5v5 teamfights, G2 felt heavily outmatched, so the kings of macro found another way to squeeze out a win in game 5.

After Wunder tore down the bot lane inhibitor and then inhibitor turrets during a split push, there was now suddenly an open door for G2 to exploit, should MAD make a mistake and venture out too far out. 32 minutes into the game, unable to contest any neutral map objective, Rasmus “Caps” Winther and Mihael “Mikyx” Mehle backdoored MAD’s Nexus… only to see it live by a smidge. 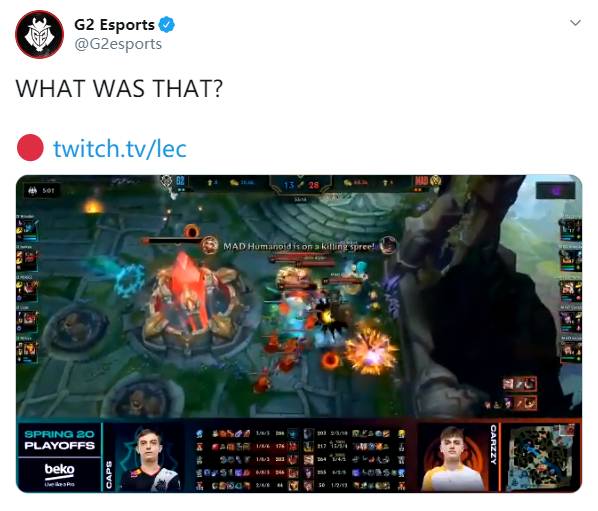 Once this opening closed, MAD had a room to breathe and the next time they found G2 on the map, it was a complete trashing. All five members of G2 perished, leaving their base exposed and thus ended the manic series — with an unbelievable upset.

With this win, MAD Lions throw a serious question mark over the remainder of the Spring Playoffs. The fourth-seed team was supposed to be an easy prey for G2, which eventually dies in the lower bracket, but the Lions have shown they can bite and kill. If the three-peat LEC champions can be taken down, then so can Fnatic and Origen, who will spar tomorrow to decide who will face MAD in the winners bracket final.

G2 are still favorites to make the grand finals — and even win it — but seeing the titans of Europe beaten by an unlikely contender has to be a morale boost for their rivals. Then again, there have been obvious mistakes in G2’s play, such as their sub-par bot lane performance, that the reigning champions can easily identify and fix before next week.