Boston Uprising’s off-tank player Walid “Mouffin” Bassal is at the center of several allegations of sexual misconduct. Twitch streamer KhaleesiBB shared her experience with the professional Overwatch player, which has prompted several other women to speak out about their own experiences with him.

The allegations state that Mouffin has a history of predatory behavior, which includes soliciting and sending sexually explicit content to underage girls. KhaleesiBB explained how Mouffin acted out after he attempted to start a romantic relationship with her at the event. 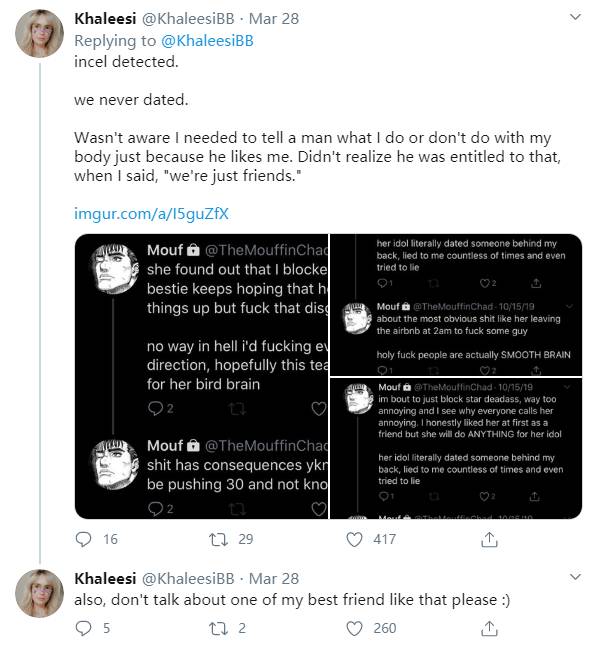 “He’s drunk messaging me telling me how much he loves me, how much he wants to date me,” Khaleesi said. “I get to TwitchCon and Mouffin immediately holds up his phone showing me my picture is his background…Not even 5 minutes later, he’s in my face, trying to touch and kiss me.”

Khaleesi went on to explain how her friends had to step in and tell Mouffin to back off and that she did not feel comfortable around him. She also described him doing the same thing with other girls at their shared Airbnb throughout the weekend and that none of them wanted to be alone with him.

Khaleesi also revealed that the main reason she did not want to pursue a relationship with him was because he was seeking out other women and sending them explicit content over social media, and that some of these girls were underage. Mouffin would later allegedly blackmail or bribe these girls to stay quiet to avoid the news breaking about his behavior.

“I was notified around that time that the reason he might be going on an apology spree for any bad behavior, is because he had been dming underage girls sexually…he had sent them videos and engaged with sexual behavior with them,” Khaleesi said. “Mouffin had a penchant for underage girls and overall, extremely predatory behavior towards women.”

Khaleesi also shared screenshots of Discord and Twitter messages with the Uprising player, which has inspired others to speak out about their own interactions with Mouffin.

Boston Uprising responded to the situation this morning with an official announcement that Mouffin will not be competing in today’s match against Toronto and that they will not be commenting further while investigating the matter.

This is not the first time a Boston Uprising player has taken part in sexual misconduct. Jonathan “DreamKazper” Sanchez was cut from the team after allegations of him soliciting sexual explicit photos from underage girls were confirmed.