Right after the announcement of ESL LA Major online Dota 2 statistician and datDota manager, Ben “Noxville” Steenhuisen challenged the integrity of the basis for the invited teams in the online regional leagues through a brief article. 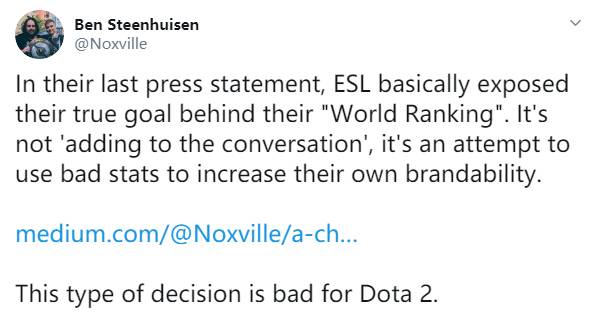 To begin his argument, Noxville pointed out this statement from ESL’s own World Ranking list.

But now that the invites for LA Major and Birmingham are released, Noxville stated that this World Ranking was supposed to determine which teams will join the already-invited teams for Birmingham which are OG, TNC, EG, and IG.

Based on those rankings, LA Major had only invited for Nigma, Liquid, HellRaisers, Team Spirit, and Furia Esports, but Noxville pointed out the Pain Gaming was not included due to a rumored roster change and questioned why OG.Seed was not yet invited despite being 15th on the World Rankings.

Noxville pointed out several issues about the ESL World Rankings such as: not having a published statistical metric; obvious feedback loop; ignoring the difficulty of individual matches, and no definite way to lose points other than their own decay calculations.

Because of this, the World Ranking does just “add to the conversation” anymore, but have become a standard for the tournament invites despite its inaccuracies and flaws.

Even though they have invited five teams from the list, ESL’s own system is still not enough to become a concrete and objective basis of ranking teams. With this, it may lead to statistically-weaker teams being prioritized over the actually good ones in tournament invites and events.

Closing his statement, Noxville said that this method is bad for the competitive integrity of Dota 2. Do you agree with him? Share your thoughts in the comments and stay tuned for more!