YawaR, SVG, and the other Quincy Crew Dota 2 players have been released by Chaos Esports Club today after just five months of competing under the organization's banner.

Chaos were one of the stronger teams playing in North America, but the organization is looking to cut costs during the current coronavirus pandemic and focus on other projects amid the uncertainty of the 2019-20 Dota Pro Circuit. 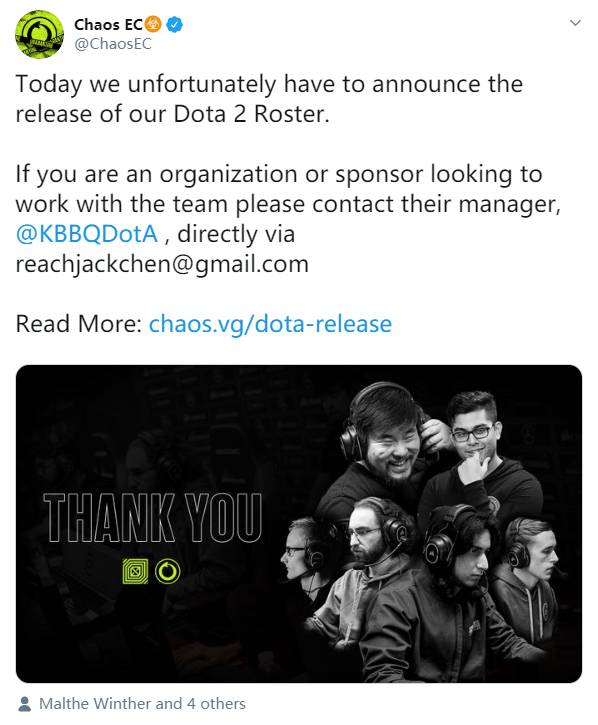 Chaos had a decently successful run with the former Quincy Crew roster, only making changes to one position throughout their five months under contract and placing second at Dota Summit 11. Their only appearance at a Major (DreamLeague Season 13) ended with the team being eliminated early, only placing 13th in their debut.

The organization is still working with its former players to make sure they're accommodated for while the transition takes place.

"This is not a decision we made lightly, but during these uncertain times and with the DPC circuit suspended it is impossible for us to justify the cost of a Dota 2 team at this time," Chaos CEO Greg Laird said. "The world is an unprecedented situation and it is necessary for us to focus our efforts into a few key current & upcoming projects for the long term success of the organization."

The now former-Chaos roster has some incredibly talented players who will likely find work elsewhere quickly if the stack breaks apart. But if they plan to stick together, there could be a lull in sponsorship opportunities. Specifically in North America, J.Storm, Complexity, and now Chaos have all pulled out of Dota, with only Cloud9 jumping into the scene and forming a new roster.

There are two full stacks of talented teams with proven records, former-Chaos and Fear's business associates roster (formerly J.Storm). But the uncertainty looming over the current DPC season, even with the ESL One Los Angeles Major still happening, means player-run stacks are likely going to be more common.

The current roster that SVG will lead into battle when the ESL One L.A. Major kicks off on March 28 with online matches includes:

It's unclear if they'll pick things back up and continue playing as Quincy Crew in the NA bracket at ESL One L.A. or if something else will happen between now and March 28.