The last leg of the Grand Finals showed some of the quickest brawls in China, Europe, and South America. After the convincing series victories, we now have the complete list of Regional Champions at the WeSave! Charity Play. 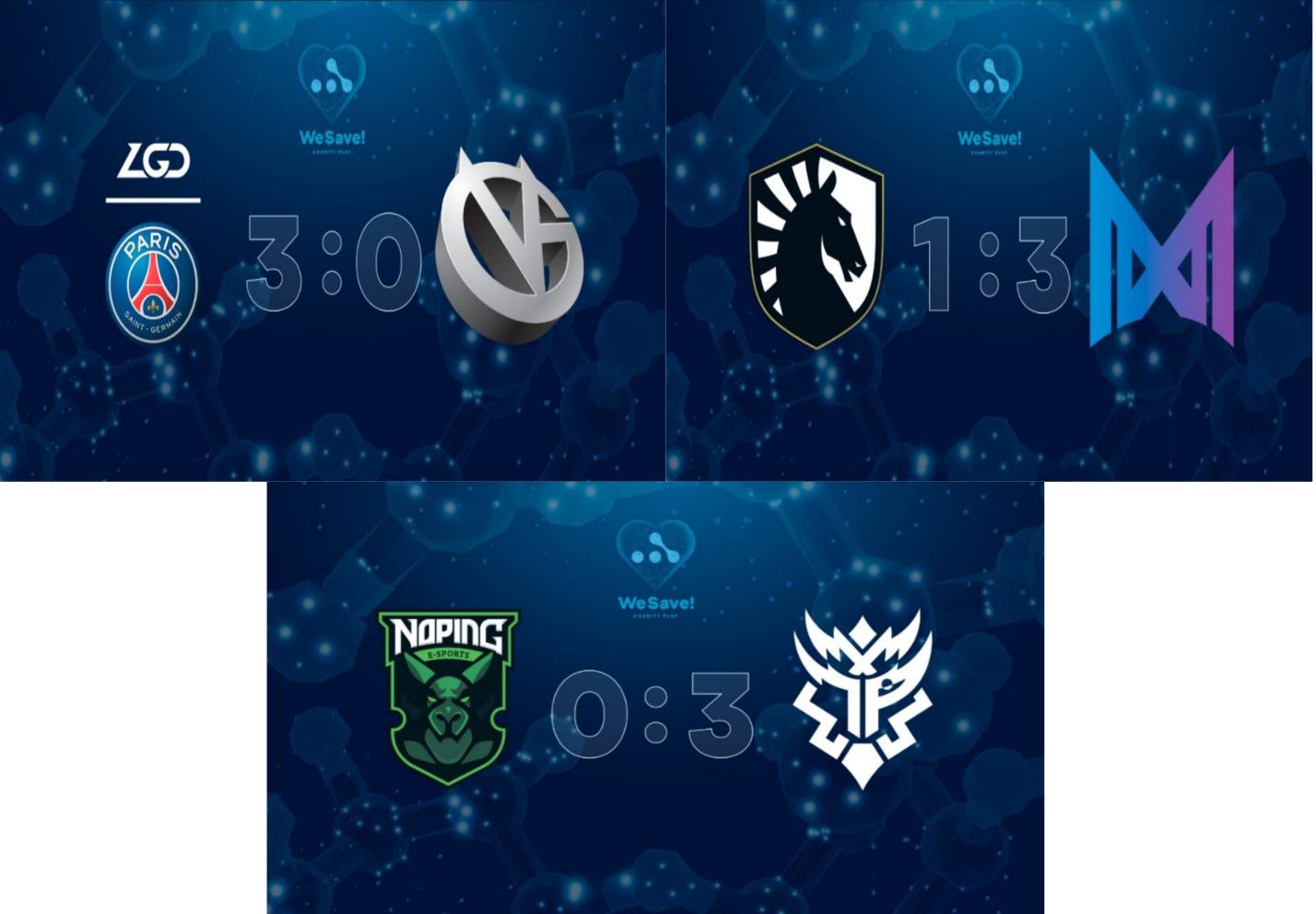 With the past performance of PSG.LGD, it seems that more people have favored Vici Gaming, but today, PSG.LGD showed up big time as they sweep the Major contenders.

Game 1 went surprisingly well for LGD as they take down the aggressive and tanky lineup of VG. The continuous fights brought VG to its knees and surrender at 21 minutes with a 28-7 kill score. For game 2, Somnus’ Ember Spirit set the tempo of the game with rotations from the whole LGD to delay and disrupt the teamfight combos from Vici. Just a few teamfights later, VG realizes their loss as they call gg at 18 minutes with a 21-4 kill score.

For the last game, LGD baffled VG with their draft as they turn on a mid Earth Spirit for the ninth pick. In the early game, Vici Gaming displayed a glimmer of hope as they won trades as well as held their outer towers, but when Earth Spirit and the rest of LGD grouped up, their situation became similar to games 1 and 2. With Crystalys and Halberd on Earth Spirit, Chalice Lifestealer Infested on him to isolate VG’s cores and kick them towards the side of LGD. Despite BKB’s on Vici, the sustain and damage from LGD were too much and after 30 minutes, Vici finally calls it. The 31-14 victory is led by Chalice’s 13/1/8 and eLeVeN’s tanky Abaddon who finished with 18 assists as PSG.LGD become the WeSave! Charity Play China Champions.

In game 1, a last pick Broodmother for Team Liquid made Nigma suffer as Kuroky Clinkz went on against them. Despite adjusting their lanes, Nigma still had a rough early game with the Rubick and Grimstroke combo from Liquid. With Diffu and Aghs at Broodma by 15 minutes, Team Liquid ran over Nigma 41-18 to take game 1 in 33 minutes behind Qojqva Broodmother finishing with 20/1/8 while Insania Grimstroke tallying 27 assists.

For game 2, Kuroky played another Clinkz, but this time it merged well with the core Silencer, Meepo, and Night Stalker to counter the same cheese strat of Liquid. With triplanes facing each other, Team Liquid had the upper hand, but a 10-minute Ethereal for W33po allowed him to rotate and secure more kills for Nigma to take the lead. Similar to game 1, Nigma just ran at Liquid and took their defense and intelligence down. By 25 minutes, Nigma goes straight to Team Liquid’s Throne and win 41-22 behind W33’s 17/1/5 and Gh Tusk’s 24 assists.

A mid Spirit Breaker for W33 led the aggressive playstyle of Nigma against Liquid’s mid-game lineup. Continuous rotations from Gh Tusk, Kuroky Clinkz, and Spirit Breaker starved off the farm on Liquid’s cores, while Mind Control Necrophos secured some free farm over Qojqva Lone Druid. Meanwhile, Anti-mage only joined in for certain kills. Non-stop brawls between two teams had W33 tanking the disables and as Mind Control gave sustain and constant damage, the rest of Nigma swoops in for trades. Liquid took the first Aegis but despite that, Nigma just ran over them and force them to tap out at 29-21 by 26 minutes behind Miracle’s 9/2/8 and 17k networth as well as 17 assists from W33 Spirit Breaker.

For the fourth time in a row, Nigma picked another pos 5 Clinkz for Kuro where he acted as the scout in the map so W33 Batrider and Gh Tusk can rotate. Like their previous wins, Nigma just went OG-style on Liquid as they continuously fought them as soon as they successfully ganked one. Nigma returns the game 1 beatdown once more to Liquid as they force them to call gg at 21 minutes. At 39-15, Kuroky led the team with 15/4/10 as a position 5, while Gh Tusk shows up again with 23 assists to be the Europe Champions of WeSave!

In the last series of the day, Thunder Predator took the first win behind a last pick mid Necrophos for Leostyle to counter the healing and teamfight potential of NoPing. NoPing had the early game lead, but the moment MNZ Terrorblade finished his Manta and BKB at 17 minutes, Thunder Predator began their offense as NoPing had no clear response on the enemy TB. With Necro soaking up the damage, the rest of Thunder Predator just toyed with NoPing and take game 1 at 30 minutes. The 24-14 victory was led by MNZ with 8/1/11 and LeoStyle’s 15 assists.

For game 2, a harder beating came from Thunder Predator’s very mobile cores. Even though NoPing’s mid Riki took some kills, a pos 4 Ember Spirit on TP contributed a lot in fights to allow their cores to clean up and win some trades. At 36 minutes, MNZ Slark, LeoStyle Puck, and Frank Nature’s Prophet sealed the win at 46-28 kill score with both Puck and Slark recording 13 kills, while NP secured 27 assists.

In a one-sided fashion, TP just stomps NoPing with their very aggressive draft that featured a pos 4 Puck on Matthew and a last pick offlane Slardar for Frank. Together with LeoStyle’s Ember Spirit, TP made sure that the enemy Medusa won’t hit her item timings as they actively controlled the map. Despite their teamfights, NoPing were only able to claim the lives of the supports. True to his name, LeoStyle just styled on them with his 14/0/16 Ember Spirit with Crsytalys, Deso, and Solar Crest at 30 minutes, while MNZ Troll Warlord secured the highest networth at 20k. On the other hand, Matthew Puck and Frank Slardar contributed 20 and 19 assists, respectively, to become the WeSave! South America Champions.

Even though that the six regions have their respective champions, the final day from WeSave! is still lined up as in a few hours we will witness an EU vs CIS finals between Nigma and HellRaisers as well as a three-on-three brawl between North America’s stars. Among all these matches, which Grand Finals series did you most enjoy? Share your thoughts in the comments and stay tuned for more!