Weaver, Lycan, and Dark Seer are big winners of 7.25a

Weaver, Lycan, and Dark Seer are big winners of 7.25a

Dota 2 Patch 7.25a recently nerfed some of the most powerful heroes in the game, causing others to quickly rise through the ranks. Lycan, Weaver, and Dark Seer have seen a massive increase in win rate across different skill levels, while Ursa retains a stake on the throne even after his nerfs.

Meanwhile, Dota 2's most popular hero has received a giant dip in win rate. Pudge's nerfs have served to further neuter his already poor laning phase, which basically ensures that the hero will remain a glorified support throughout the game. 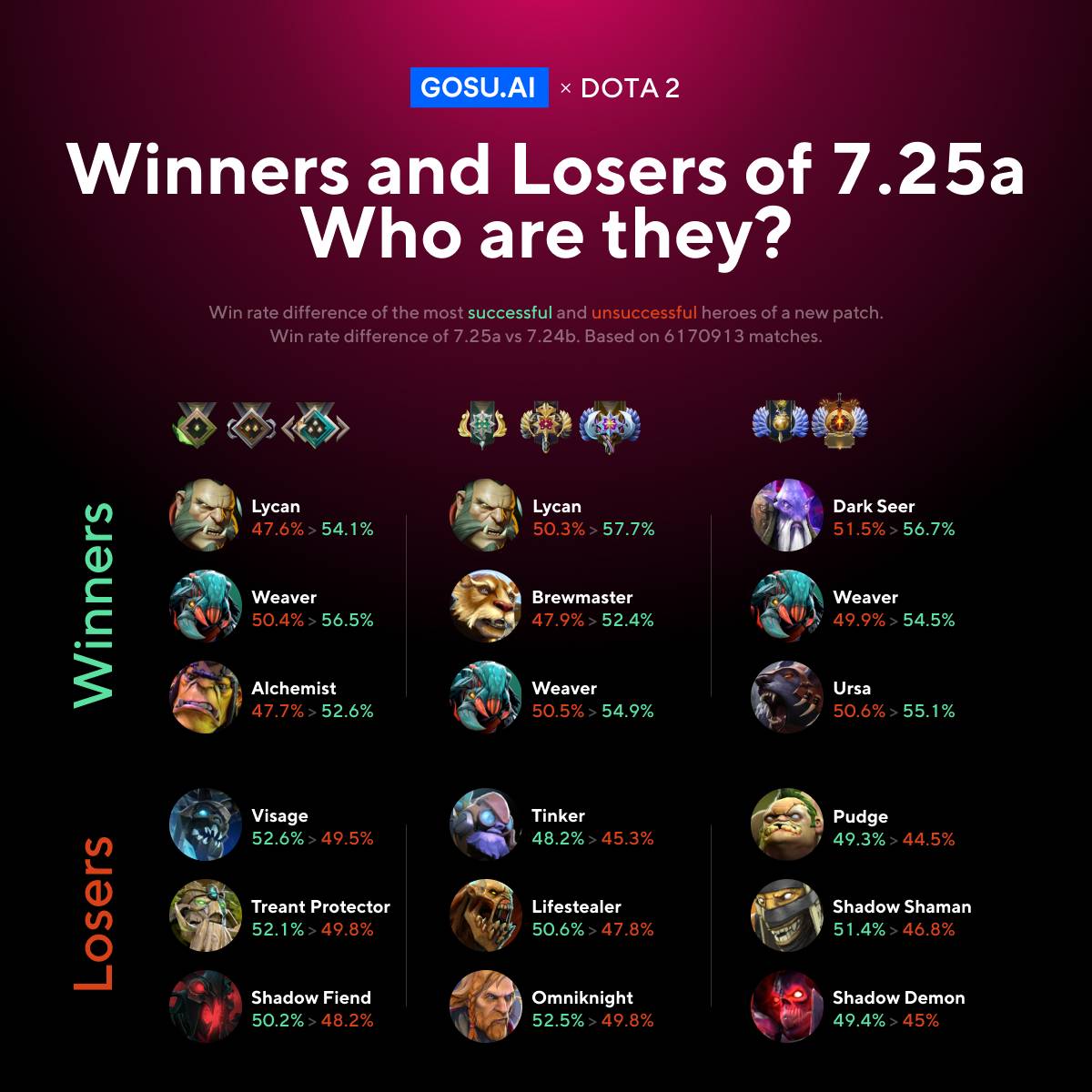 On the surface, Banehallow the Lycan only received some small buffs in 7.25, increasing the Feral Impulse regeneration and Shapeshift duration. So how does the hero have a seven percent increase in win rate since the patch was released?

What truly pushed Lycan over the edge was the cost buffs to the items he loved to build. Necronomicon and Helm of the Dominator both received gold cost decreases. On a timing hero like Lycan, getting pushing items just a minute earlier is a powerful difference in relative strength.

The additional regeneration also means that it's become an even more impossible task to push the hero out of the lane. Along with his high base damage and summons, Lycan is flexible enough to go to any lane.

High-level players have taken to playing the hero mid, allowing the hero to get fast levels and gold before proceeding to wreak havoc on the entire map with his elevated power peak and immense pushing potential.

One of Weaver's biggest weaknesses was addressed in 7.25. The hero received intelligence and mana regeneration buffs, along with an increase in Shukuchi's movement speed.

Shukuchi has always been one of the best mobility spells in the game, allowing Weaver to catch up to heroes and deal damage. It's an incredible value point at level one, dealing 100 damage, and retains its usefulness late into the game due to its massive movement speed increase that consistently sends the hero over the movement speed cap.

Increasing the hero's base mana allows him to dominate the lane even more and get extra uses out of his previously meager mana pool.

By increasing the hero's intelligence and mana regen, he's able to abuse his mobility more even as an agility carry throughout the entire game. The hero has always been starved for mana, leading him to build items such as Linken's Sphere. But these buffs greatly alleviate the resource problem and open up more build paths for the pesky bug.

Weaver was the only hero to see an increased win rate across all skill levels, likely due to the hero's relative ease of play. Weaver works even better at higher MMRs, however, and the hero has seen success across different lanes and positions.

The hero can farm well without items since Shukuchi allows him to move across the map quickly and deal damage. His powerful Aghanim's Scepter upgrade that allows Time Lapse to be used on allies makes him viable as a utility core or greedy support.

Dark Seer has always been the brunt of jokes when it comes to patch notes. His Vacuum has received nothing but nerfs over the years, but like Batrider, his innately awesome teamfight and enabling skill kit makes him the perfect hero in certain compositions.

The hero's Surge and level 10 talent were altered in 7.25, changing his Surge to a static movement speed rather than a percentage. While it received a slight cooldown nerf in the early game, the static value makes it more powerful since heroes are generally slower in the early game, allowing him to function as a gap closer for laning allies.

His level 10 talent was changed from the largely useless +90 damage to an incredibly useful increase in Ion Shell radius. In practice, along with the buffs to Surge, it makes it even harder for enemies to evade the damage output from the short range but high damage skill.

Ursa is still pretty much broken. The hero received some minor nerfs in 7.25a, but it clearly wasn't enough to send the hero back down into the trenches.

It's still a premier carry choice in high-level pubs. The buffed numbers of Fury Swipes makes the hero a better last-hitter while remaining one of the best traders in the game. The hero is also a premier Roshan taker. Simply picking the Ursa Warrior will put enemy teams on high alert regarding the objective.