Adroit outlast Geek Fam to be the WeSave! SEA Champions

Adroit outlast Geek Fam to be the WeSave! SEA Champions

Opening the Grand Finals, the two of SEA’s strong teams face each other in a classic Bo5 brawl. Even though Adroit and Geek Fam both came strong, Adroit outwits Geek Fam after five intense matches. Let us take a look at how the series went. 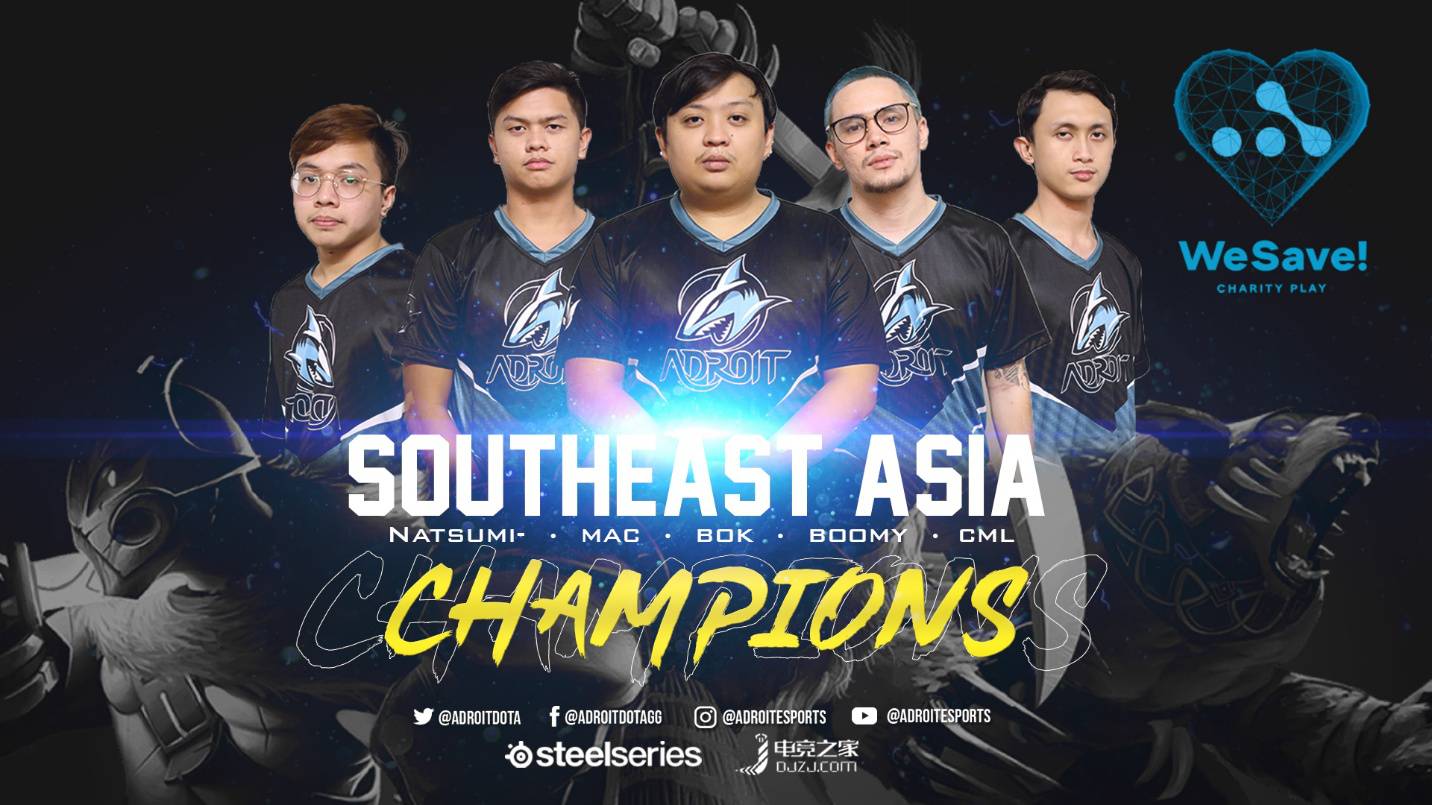 For the early game, rotations from Xepher ES allowed Raven to secure some free Agi for Slark at the bot lane as well as help Karl in the mid lane. Adroit retaliates with a mid tower push, but the exchange just gave them a single kill, pushing the kill score to 9-2 by 11 minutes in favor of Geek Fam.

With a stolen Fissure, Rubick and BS killed Slark, while SF solo killed Necro at the top lane with a Eul’s and Requiem combo. With Exo, Adroit pushed the bot T2, but Geek Fam goes around and catches Necro, DP, and Chen at the mid lane with Slark leading the offense.

With Fissure and Duel, Geek Fam quickly takes down DP at their mid lane and chase Necro at their jungle, allowing them to secure Aegis on Slark by 22 minutes in exchange of ES. With the BKBs on Adroit, they countered Geek Fam’s gank and kill SF near the Rosh pit and catch LC with a Reaper Scythe before they take the top T1 and regain some control of the map.

Geek Fam smokes as four and wraps around Adroit at the Radiant Outpost, but only find Boomy as others quickly escape. They continue their pressure and fight each other at the Dire jungle, LC drops immediately, but Slark tears through 4 of Adroit as they take the bot T3. Buybacks flew, but with Diffu, S&Y, and BKB, Slark led the fountain dive and force Adroit to call gg at 31 minutes. The 26-7 victory ended with Raven Slark’s 9/1/11 and Karl SF’s 10/1/6 while Whitemon’s Lich finished with 19 assists.

In the early game, the tri-lane from both teams fought hard, but Geek Fam took the upper hand with the trades.  With a rotation from Puck and DP, they were able to Coil AM up top to get the kill and the Outpost before 10 minutes as well as the top T1 tower.

Adroit pushes more on the mid T2 and chases AM to their bot. Kuku baits them and with a stolen Fissure from Xepher, three of Geek Fam melted with a Sonic Wave and Chain Frost, listing an 11-9 kill score. Then, Adroit secures the Aegis for PL by 21 minutes and traded side T2’s with Geek Fam.

Bok commits the Exorcism on the top T3, while AM rats bot, but only forces the Puck to defend. Adroit waits out on the Exo again, but as QoP pushes the top T1, she successfully escapes an Echo and Exorcism as well as baiting the Coil on Void Spirit without no one dying on them.

With Battle Fury, Manta, Skadi, and BKB, AM fought with Geek Fam and took down three of Adroit and they managed to take half of Rosh’s HP, but Adroit forces them out of the pit to give Aegis on PL by 33 minutes and take a 3-1 trade after PL ripped the back line.

Geek Fam responds with a smoke and kills the supports of Adroit, but a four-man Aghs Coil from Mac gave PL the opportunity to escape and allowed Adroit to take down Rubick, QoP, and Void Spirit as they kite AM away.

Adroit engages a fight in Dire’s bot jungle and killed three of Geek Fam, but Geek Fam forces Puck to die and buyback. However, Adroit still took the mid and top racks. Geek Fam chases them away and finally kills a tanky PL.

40 minutes in, Geek Fam began to hunt and try to take the third Aegis, but Adroit smokes and fought inside the pit, but Dire takes the Rosh and Aegis on Raven. As they push, Adroit locks down AM for the Aegis and as he escapes Puck caught him with a Coil to kill him without buyback.

Adroit chipped on the bot racks, Karl dies and buys back while AM went for the backline and kills Puck. Adroit goes for the Throne but Raven just goes against them only to be killed and quickly bought back to def but it was not enough as Adroit takes the 47-minute victory. The non-stop 30-26 action ended as Natsumi PL carries the win with 28k networth, while Mac Puck finishes with 12/5/13 while Cml Chen finished with 19 assists.

Adroit took over the laning phase as each lane went aggressive and succeeded in kills, but Geek Fam still remained in the game as they take kills as they defend their towers. Adroit pushes the bot T1 and T2, but Geek Fam regroups to fight, but Underlord TPs Adroit away from a potential fight.

With Vlads on Pango, Adroit takes the Aegis for Terrorblade at 18 minutes as they secure the map and picked off kills and siege the mid T3 and Underlord just ultis out the moment things went south for them.

Geek Fam counters with a three-man smoke and finds an Enchantress with Necro 3. Despite Sundering Enchantress, Boomy still dies, but gave enough time for Adroit to kill three of Geek Fam and take an 11k lead.

Another fight breaks at the mid lane and Geek Fam claims Clockwerk, but Natsumi and Pango came from behind and take three of Geek Fam to secure the mid racks. A four-man Rolling Thunder from Bok quickly took down Nyx who bought back immediately. Adroit continued to chase and forces a die back on Nyx for a 3-2 trade.

28 minutes in, Terrorblade picks up the Aegis as they run up the high ground. A two-man Hookshot and Cog imprisoned Kuku and Whitemon as Geek Fam began to go on Terrorblade, but the cores on Adroit were too difficult to deal with as they win at 30 minutes. With a 24-13 kill score, Natsumi contributed 7/0/5, while the rest of Adroit had an average of 12 assists each to take the series lead.

The early game was pretty even, but rotations from Leshrac picked off PL and take the top tower. Adroit begins their move as a 3v3 fight at the Dire jungle, but resulted into two kills for Geek Fam allowing them to rotate the mid tower 11 minutes in.

Geek Fam holds control of the map and smokes as five. They go into Dire’s bot jungle up to mid and finds Centaur and a few more per their rotations, pushing the kill score in 17-5 at 19 minutes. They commit Fiend’s Grip and Coil to Kunkka, but a saving Disruption allowed Geek Fam to turn the fight in their favor.

22 minutes in, Leshrac secures an Aegis and charges onto Dazzle and Centaur to transition into a push at mid racks. With BKB and Radiance on Kunkka, Geek Fam surges into the bot high ground with a stolen Stampede. They dive, but commit too much as Adroit claims the life of Kunkka and SD without losing the bot T3.

Adroit holds on to their high ground with PL only having Diffu and Manta, while Lesh now has Bloodstone and Shiva; and Kunkka having his Assault Cuirass. However, they still can’t push high ground as Adroit continues to make space for PL.

32 minutes in, Karl picks up the Aegis as Geek Fam finally tries for the bot racks again. Kuku zones out Adroit with Rolling Thunder. Centaur buysback and PL charges towards Geek Fam. Centaur dies back, Natsumi rips four of Adroit with clutch Graves from Dazzle. Despite losing the bot racks, Adroit takes the Aegis, a team wipe, and force two buybacks in exchange only of Puck’s and Centaur’s deaths.

Geek Fam makes their way to the top lane, but a Coil on Geek Fam’s cores, but the damage from Leshrac melts Dazzle and a buyback from Bane. Lesh continues to push the last racks as they proceed to the T4’s, but a tanky Leshrac just puts down Adroit and at 42 minutes, the Throne falls. With 40-12 kill score, Karl Leshrac’s 19/2/10 and Kuku and Raven with 23 assists each to force a game 5.

The laning was a bit weird for Adroit as they kept switching between Lycan and Razor on mid to avoid a Tidehunter who relentlessly follows Lycan. However, rotations from Adroit’s supports allowed them to claim more kills and successfully contest the massive stack of Ancients after a 4-1 trade.

Geek Fam smokes as three into Radiant’s side, Sven takes down SD who immediately bought back then ran off with Geek Fam. Adroit chases them and kills three and pick up the Aegis on Razor whose Aegis quickly is popped as he overextended into Dire’s jungle at 23 minutes.

With their triple BKB, Adroit smokes as five into the mid lane, and despite initiations from their Clock, Geek Fam isolated Lycan for a 2-1 trade in their favor. Adroit returns to the fight and even with a four-man Ravage, Adroit still killed him, allowing them to push out two lanes.

Geek Fam begins their charge 30 minutes in as Sven finishes Madness, BKB, Blink, and, and Cuirass to kill SD and Lycan as well as push the bot T2. Both teams guarded Rosh, but Adroit risks a four-man smoke to wrap around the mid. However, a smoke from Dire bursts Mars, but with BKBs during the Ravage, Adroit claimed the lives of AA and Sven.

Clock hooks onto Void Spirit in mid to force a buyback and with a Ravage, they pick up Razor, Mars, and SD to allow Geek Fam to push out their lanes. 47 minutes in and Rapier on Void Spirit, Geek Fam smokes and catches Natsumi who barely escaped. Adroit retaliates with a 2-0 trade and force Kuku to buyback.

Adroit gets the third Aegis and Refresher on Razor and knocks on the mid T3, but Geek Fam holds them off. Adroit sets off another attempt at high ground with Aghs on Razor, but a stolen Arena allows them to pop the Aegis, Karl almost drops the Rapier but with Ravage and a stolen Hook, Void Spirit survives and takes down four of Adroit as Mars just respawns.

Geek Fam rips the mid racks and regroups for a smoke but bursts an Illusion, but distracts them long enough to secure an Aegis for Razor and Aghs on Lycan. Adroit kills Void Spirit as Mars picks of his Rapier and even though the Aegis was popped, Adroit sweeps most of Geek Fam and force Tidehunter and Sven to buyback in order to defend mid racks.

Karl buys another Rapier at the 60-minute mark as both teams gather T5 Neutral Items. The wolf forms on Lycan and Mars just run through Geek Fam for a quick team wipe and finally wins at 39-27. The well-deserved victory is attributed to Mac Razor’s 17/6/14 and 25 assists from Boomy Clockwerk.

With this win, Adroit are your WeSave SEA Champions. What can you say about this hype series? Share your thoughts in the comments and stay tuned for more!

下一篇：BuLba: I have not had a Rampage for a while now.