The first CS:GO Major of 2020 has been rescheduled to take place in November due to ongoing concerns surrounding COVID-19, ESL announced today.

The Rio Major, hosted by ESL and Valve, was set to begin with the Minor circuit next month shortly followed by the Minor play-in and the Major qualifier in May, with the Championship stage beginning on May 16. But the Major has been pushed to November due to concerns surrounding the coronavirus. The Championship stage will take place from Nov. 19 to 22, while other dates for the Minors are yet to be announced. 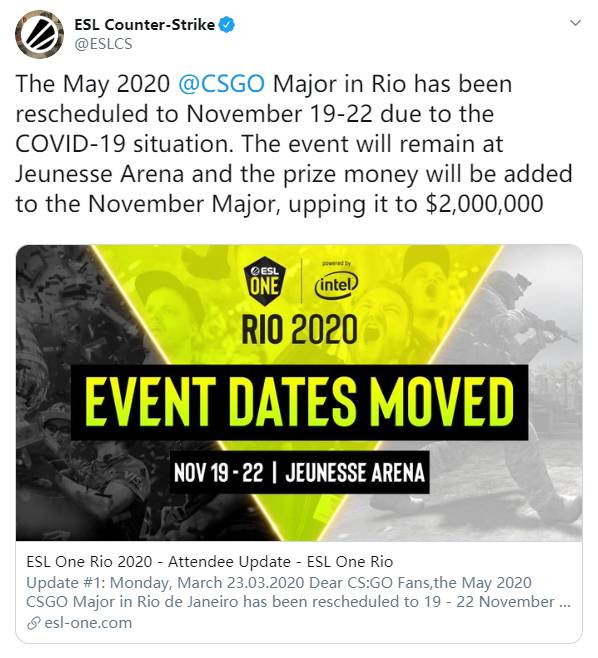 Since this was the date planned for the second CS:GO Major of the year, the ESL Rio Major will replace it. But the prize pool has been doubled from $1 million to $2 million to compensate.

The venue for the event hasn’t changed, either. This means that the Championship stage will take place in the Jeunesse Arena in Rio, Brazil later this year.

This will be the first time since the introduction of Major events in 2013 that CS:GO has had one Major in a year. Since then, there have been at least two Major tournaments each year, with 2014 and 2015 being the only exceptions at three in one year.

Since this tournament’s prize pool has been doubled, it will be the largest prize pool for a CS:GO Major at $2 million. All Major events have received a $1 million prize pool since the MLG Major Championship: Columbus 2016.

下一篇：Astralis sign es3tag, will officially join in July due to contract