The second half of the China, Europe, and SA region went underway at the Day 4 of the WeSave! Charity Play. Along with it were some great sweeps as they complete the list of Grand Finalists per region. Let us take a look at how each series went.

In game 1, Ehome’s XinQ Mirana shot arrows that ensured the early kills for Ehome, but rotations from Eurus Mars and Pyw Puck ensured that VG’s Ori Medusa secured farm more than NothingToSay Alchemist. At a 13-minute Manta on Medusa, VG began the charge and quickly pushed high ground, Alche, Sylar Riki held ground with a great Black Hole from Faith Bian Enigma. However, it was too late for them to catch up as Vici Gaming’s cores already snowballed, forcing Ehome to call gg at 26 minutes behind Ori’s 10/1/17 and Pyw’s 17 assists at the 24-15 victory.

Vici Gaming just toyed around Ehome in game 2 with a Dark Seer and Spirit Breaker combo as the SB rotated non-stop to pressure all of Ehome’s three cores. With an early Vlads, Vici Gaming quickly fought as five and won teamfight after teamfight despite Ehome taking several pickoffs. A Surged SB just ran over Ehome’s late game draft. VG even dove them in their T3 even though T2’s were still standing. With the 30-11 beatdown, Ehome calls gg at 25 minutes to give VG the Grand Finals slot behind Pyw SB’s 22 assists, Yang Dark Seer’s 20 assists, and 9/1/6 on Ori’s mid Troll Warlord.

An offlane Bounty Hunter for Secret made the early game hard for a Miracle’s Riki carry, but that did not stop the mid Silencer and offlane Clockwerk of Nigma to rotate and continue their aggression to take control of the map. But because of BH’s Tracks in fights, Secret was able to secure a 37k gold lead, yet an Io relocated Silencer to hit put Secret’s Throne halfway down. Secret baited Nigma into out-of-position teamfights before Secret takes the last Roshan. Secret begins their push up top, but Riki sneaks on to the enemy Throne, and as he arrives, Gh Io and W33 Silencer Relocated and together they ripped through the backdoor protection and take game 1 after 52 minutes of 37-34 kills behind Miracle’s 18/3/15 and Gh’s 22 assists and 27k healing.

In game 2, Kuroky showed more of his masterful drafting as he played a last pick mid Batrider for W33, and a carry Nature’s Prophet for Miracle. In the early game, great rotations from Yapzor Earthshaker and Gh Nyx Assassin put the kill scores at a tie, but Mind Control’s Necrophos secured an early Pipe, allowing Nigma to charge in Secret’s magic damage lineup. Nisha’s Arc Warden, Matu Void Spirit, and Zai Dazzle tried to hold on, but the initiations, sustain, and damage on Nigma were too much to handle, forcing Secret to give up the sweep. With 27-25 at 28 minutes, Nigma wins the series with MC’s 11/4/8 and Miracle’s 6/3/14 while Gh also tallied 14 assists.

Without K1 playing for Beastcoast, Thunder Predator took their chance and stomped them in 21 minutes with a Slark + Treant lane and a last pick Tinker. With extreme aggression, TP takes down Beastcoast with a 35-6 kill score behind Mnz Slark’s 19/0/10 and Mjz Treant’s 22 assists followed by Frank Centaur’s 20 assists.

These teams surely brought some great sweeps and now that all the regions finished their semi-finals, we will see some great Bo5 Grand Finals as well as a special EU vs CIS Grand Finals in the coming days as WeSave hits its third stretch goal. 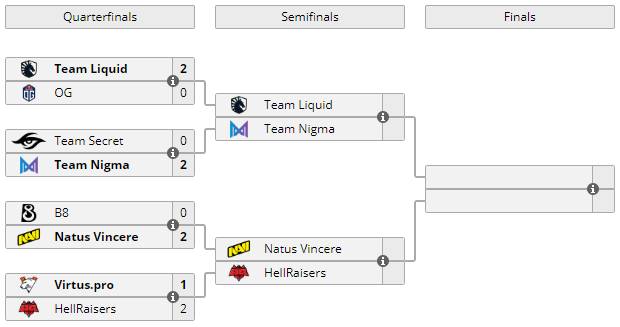 For North America, a battle between CR4ZY and Evil Geniuses @ March 25 02:00 SGT, plus an extra NA All-star match.

Which team will reign supreme? Share your thoughts in the comments and stay tuned for more!

下一篇：Drama continues, forZe former captain posting a statement of his own