Astralis sign es3tag, will officially join in July due to contract

Astralis sign es3tag, will officially join in July due to contract

Following reports that the move was in the works, Astralis has officially brought Patrick "es3tag" Hansen into their CS:GO team.

es3tag had been a member of Heroic up until this move came to fruition which has left the future of FunPlus Phoenix's journey into the title up in the air. The same reports from yesterday also claimed that es3tag's departure had strained the deal between Heroic and FPX and may lead to the latter pulling out of the game.

This move comes after a string of not so great results from the Danish side. This doesn't mean someone is on their way out, however, as it seems the players themselves asked for this to come to be. The team will run with a substitute position where Danny "zonic" Sørensen, the team's coach, will be deciding which five to field at any given time.

"In order to improve working conditions for our players, it has been decided to increase the Astralis roster to six players," the official tweet from Astralis reads. Inside the post on their website, Astralis go on to explain that while improved structures in leagues such as ESL Pro League have provided "real progress," it "does not change the fact that a 5 player roster leaves no room for giving players a pause when needed for physical or mental recovery." 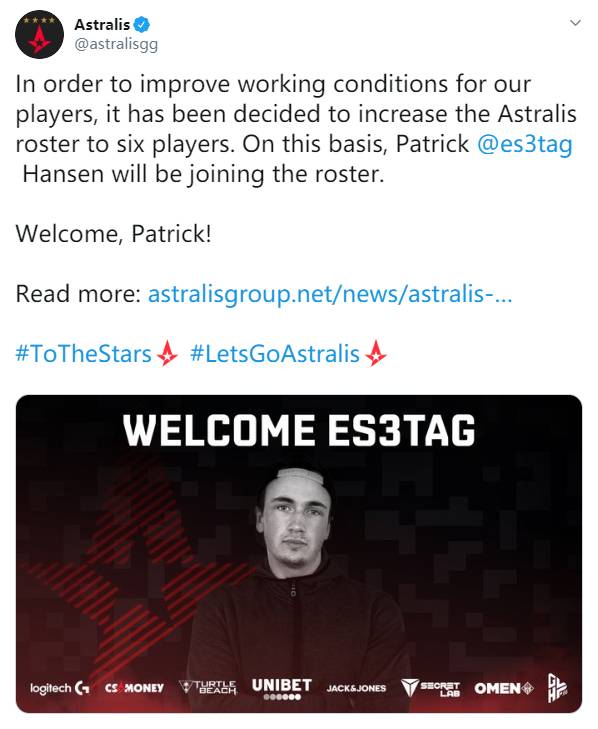 This move will not come to fruition until es3tag's contract expires in July according to Astralis.