Last seen since TI9, OG’s TI-winning carry, Anathan “Ana” Pham takes a break from his vacation as he plays as a stand-in for TNC due to their original carry, Gabbi having ISP issues. That being said, the Day 3 of WeSave! Charity Play opens with a thrilling series between TNC and Adroit. 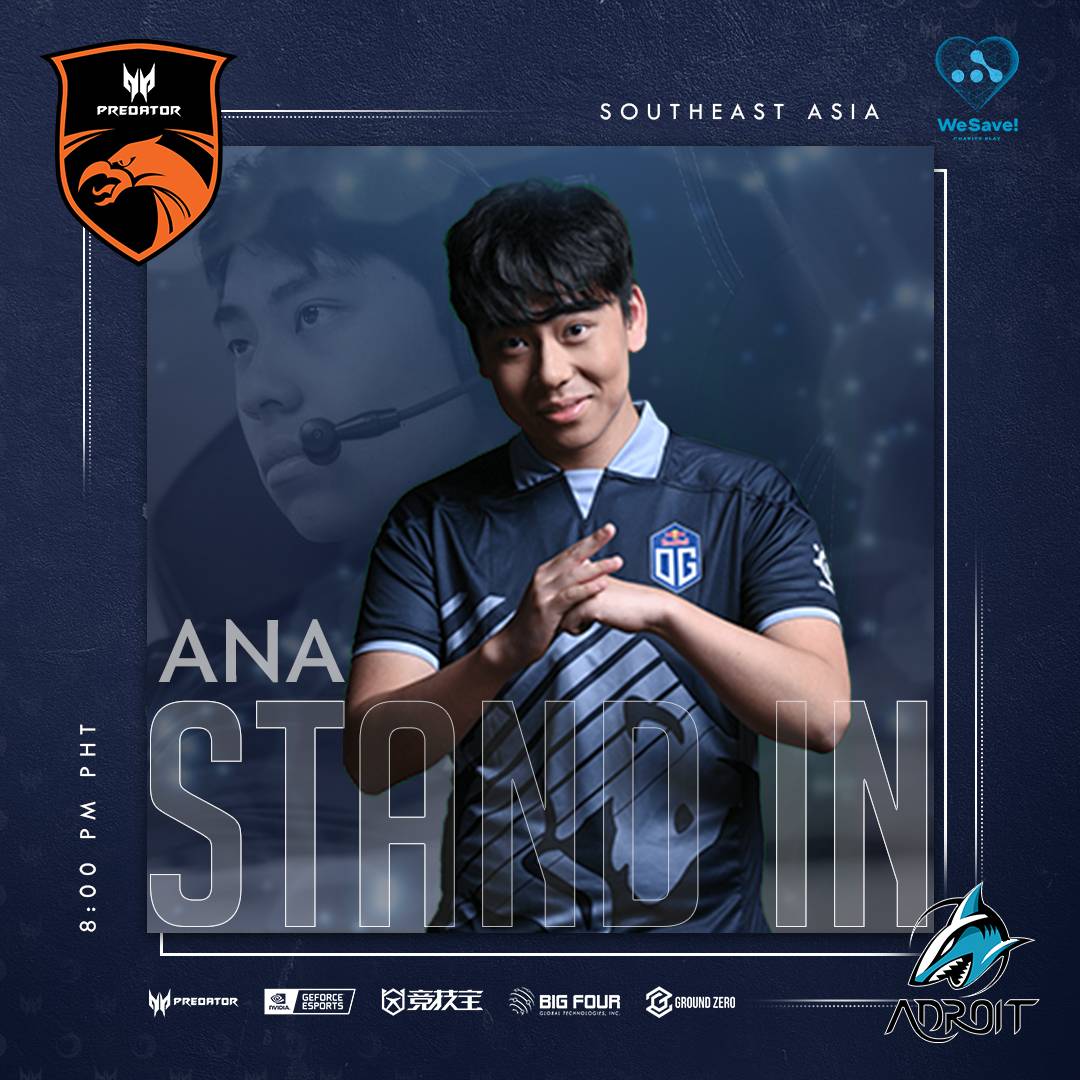 In the early game, rotations from Tims and Armel delayed Sven’s farm as well as secure free farm for Ana while Kpii pushes the mid and top T1 towers. 15 minutes in, Adroit smokes as four and catches TNC in the Radiant bottom jungle, but TNC spread them far apart and kills Mirana and Sven just before Underlord’s ult carries them to safety.

With a Diffusal, Ana jumps into Adroit, Kpii quickly follows through with a two-man stun and Tims stolen Pit of Malice to take down three of Adroit. TNC continues to pick off kills in Dire’s mid T2 and take down the T3. With Sven finishing his Aghs at 19 minutes, Adroit contests the Radiant outpost and kills Centaur.

TNC secures Aegis for Armel as they continue to take over the map. After killing Centaur, Adroit takes their chance and pops the Aegis off Void Spirit, but TNC manages to kill Ember who immediately buysback and Underlord. TNC just takes the half of mid racks.

With a Skadi, Basher, and Diffu on Ana by 27 minutes, TNC intercepts Adroit into their own base. Despite multi-hero Will O’ Wisps, TNC’s sustains were more than enough to win game 1 at 29 minutes with 19-7 victory behind Armel’s 7 kills and March’s 15 assists, while Ana finished with 4/0/10 and 16k networth.

Similar to game 1, rotations from TNC protected Ana as Armel took some kills, but Kpii is controlled at bottom as rotations from Kunkka allowed Adroit to take the bot T1 tower. TNC were a bit passive as Ana farms his Radiance, but Adroit hunts and kills Ana with the help of a Diffusal PL by 14 minutes.

Adroit takes the Aegis on PL and catches Ana on the bot lane again as Adroit pushes the bot racks as they force two buybacks on Centaur and Void Spirit, but TNC successfully holds the bot racks in exchange of Adroit’s three heroes.

With 7-7 kills at 25 minutes, Adroit finally finishes the bot racks and the mid racks. With an Echo and Scythe, Adroit takes down Void Spirit again and catches Ana before they completely back off.

TNC tried to hunt Adroit in the Dire top jungle, but Adroit just kills Centaur and Chen as well as take down Roshan the moment it spawned, giving the Aegis on PL. Adroit pushes the top lane and forces Ana, Tims, and March to buyback. Despite defending their top racks, Adroit’s cores were too strong at 33 minutes and 17-9 kill score as Natsumi PL finished with 6/0/11 and cml’s 14 assists.

A very passive early game opened game 3 as both teams’ cores farmed up. 13 minutes in, Adroit finds March and Ana in their Radiant jungle and picks up two easy kills as Adroit controls the map. Adroit smokes and catches TNC in the Dire Outpost as Adroit takes down four of them.

Adroit continues to hunt TNC into an 11-3 kill score by 23 minutes as Adroit smokes but a multi-hero Arena catches all of Adroit’s cores, resulting in a 4-0 trade to give TNC the chance to push out lanes.

Adroit secures the Aegis for Natsumi and TNC comes a bit too late into a very long team fight, with Mars casting Arena twice the resulted into a teamwipe and popped Aegis for TNC. TNC begins their offense and regains map control, but with S and Y, Satanic, Diffu, and BKB on Troll, while Ana has Diffu, Manta, Basher, and Butterfly at 32 minutes gave TNC a bit of networth lead.

Adroit quickly puts down Ana and Kpii near the Radiant mid T2 tower as Adroit begins their push to force Kpii to buyback. Despite baiting his illusion, Adroit still finds the right PL as they take down Ana and force him to buyback in exchange only of Centaur.

Adroit attempts another Rosh but Mirana baits well enough to take down Void and Magnus in an Arena. Ana picks up the Aegis and Aghs Blessing as he reaches level 25 at 40 minutes. TNC begins their offense as Mars isolates Centaur for Ana to kill, but Adroit pops the Aegis after Centaur buysback.

With Rapier on Troll, Adroit smokes near Rosh only to kill Chen before they proceed to take the fourth Rosh. TNC contests and holds off Adroit as they smoke. A two-man RP forces Kpii and Ana to buyback as Ana finally secures Aegis, Aghs Blessing on Ogre, but Void Spirit steals the Refresher Shard at 52 minutes.

TNC chokes the map as they push out every lane as both teams did not secure any barracks yet. 60 minutes in, both teams hunted for T5 Neutrals, but Adroit catches Tims and Ana as they push the bot racks.

A massive bloodbath with a lot of buybacks left TNC defenseless in their own base after Adroit put out an extreme amount of damage and after exhausting all buybacks, TNC calls gg 63 minutes in behind Natsumi’s 14/1/9 and cml’s 23 assists on the Shadow Demon.

Despite Ana using his signature heroes, Adroit’s teamplay and patience paid off as they take down TNC to face Geek Fam in the Finals. With a very enjoyable series, what can you say about Ana’s “return”? Share your thoughts in the comments and stay tuned for more!