The LEC’s top six teams have been locked in for the 2020 LEC Spring playoffs following G2 Esports’ dominant win over Excel Esports today. This also means that the journey to the LEC championship has ended for four other unfortunate League of Legends teams who couldn’t find their form in time this split.

Today’s victory has secured playoffs not only G2, but also for Origen, Fnatic, Rogue, Misfits Gaming, and MAD Lions. Meanwhile, Excel, FC Schalke 04, Team Vitality, and SK Gaming have all missed the mark this season and will be watching the postseason with the rest of the League fans tuning in. 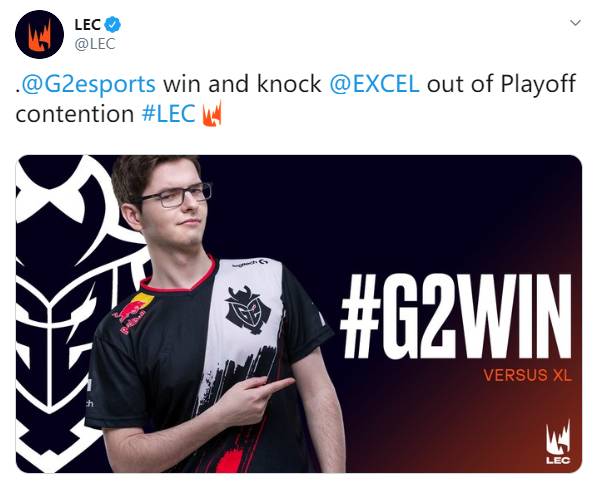 This match was pretty lopsided in favor of G2. Many people expected Excel to put up a bit more of a fight, but it wasn’t even close. By the end of the game, G2 had 28 kills to their opponent’s 12. Most of Excel’s kills were due to overextended G2 players who were practically fooling around by the end of the match.

Now, these last matches will decide the seeding for the playoffs; G2, Fnatic, and Origen are still battling for positioning. The Kings of Europe need only one more game to secure first place once again, with matches against the struggling Schalke 04 and the playoff-bound Misfits. There’s a good chance that G2 go into the playoffs with an eight-game win streak.

Meanwhile, Fnatic have their hands full next week with a game against the fiery roster of MAD Lions. Could the young guns slow down the perennial LEC champs’ momentum heading into the postseason? MAD Lions did win their last matchup against Fnatic, so anything could happen in the last week of the season.

Catch all the action when the LEC’s regular season concludes on Friday, March 27 to 28.