The Kyiv minor has recently ended with the victory of Team Aster over Alliance in the grand finals. While the spotlight is on the two finalists, we never really look at the other teams who didn’t make it that far, nor do we really care. Well, if you are wondering whether Fng from Gambit is doing well, then the answer is no, he isn’t.

In a tweet right after losing the lower bracket finals against Alliance. Fng attached an image of an anime character with a quote, “I’m dead inside”, which clearly describes what he is feeling right now. Of course, losing in a 0-2 sweep against Alliance must have been a heartbreaking experience, especially when in both games that they played, Gambit did show signs of potential victory but it only takes one instance for the entire Gambit team to screw up and lose the entire game. To top this disappointment off, Gambit’s days were not all fun and cheery at all, ever since last year’s DPC season either. Despite qualifying for almost every major last year, the amount of DPC points they earned were still not enough to secure a direct invite to the International 2019, as they were surpassed by Alliance and team OG in the final major before TI9. Sending the CIS squad just a place behind the twelfth place in DPC rankings. Regardless of that, Gambit still proceed to the TI9 CIS regional qualifiers, in hopes of securing their TI9 ticket through it. After all, they are indirectly the best CIS team during that time.

Unfortunately, things went south in a qualifier game between Gambit and Winstrike. Gambit who was initially ahead of their opponents in gold lead, eventually lost too many teamfights, forcing Afoninje (Gambit’s former carry) who was playing Morphling that game to rage quit after dying. He was split-pushing at the top lane when suddenly the entire Winstrike squad hunted him down, which is easily done thanks to having a Storm Spirit. After that, Afoninje just called GG and disconnected from the game. This lost game costed Gambit one point in the group stage, causing them to be eliminated from the qualifiers. It was after that incident, when Fng took it to Twitter to post “dead inside”. Not depressing enough? Well, Fng has missed the Internationals for the fourth time in a row, with the last International he attended was back in the International 2015, playing for Virtus.pro. 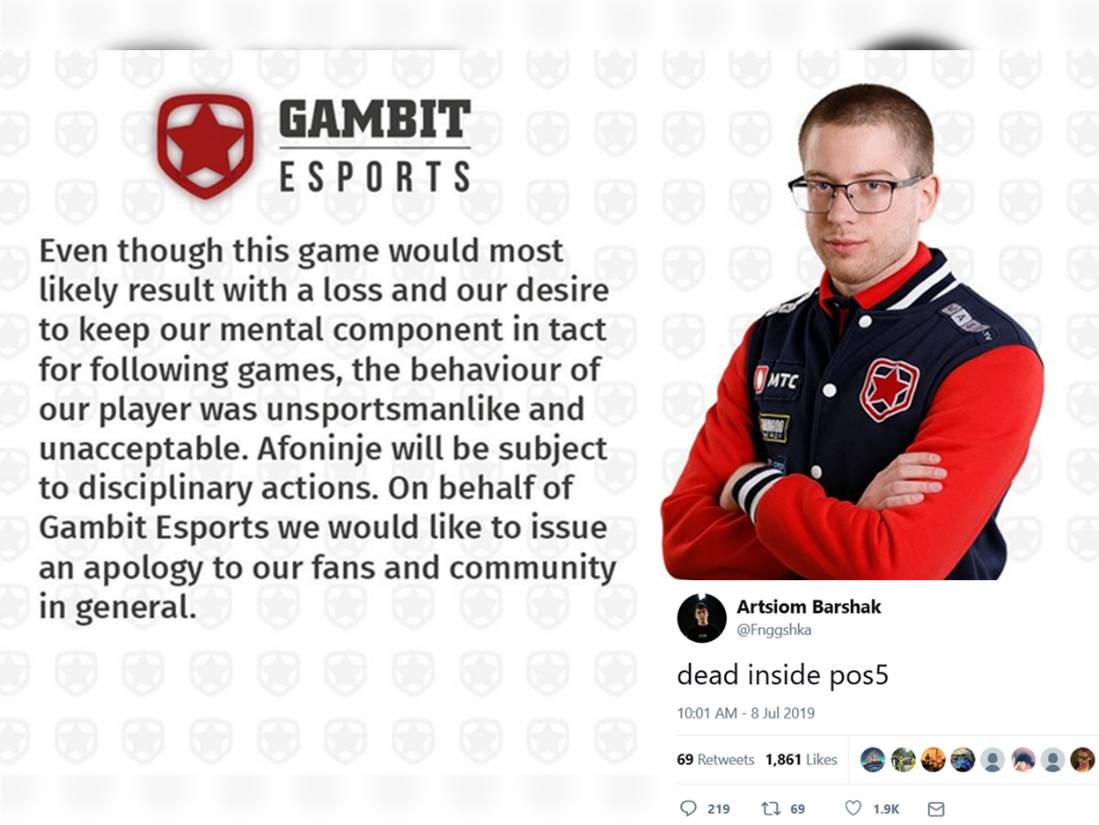 As the DPC season draws closer to this year’s International, only 2 majors remain. If Gambit hopes to be in the top 12 rankings in DPC leaderboard, then they might need to secure a commendable top 6 finish in a single major to be in the safe zone, else history might just repeat itself this year. But before that, qualifying for a major is proving to be a difficult task itself for the Fng and his stack. Now, personally I think Fng is the saddest pro in DOTA2, but perhaps you know someone who has a sadder backstory? Tell us in the comments! Stay tuned.