With a horror theme, the Loot.Bet Dota Summit 12 began its first day with eight matches that featured Fnatic, Evil Geniuses, Team Liquid, Thunder Predator, OG.Seed, and Cloud9 over the Bo2 Round-Robin Groups. Let us take a look at how each of the series went.

Against C9, DJ Puck did the work in game 1 as he finishes with 8/0/9 in their 24-8, 23-minute victory. Fnatic did their longest match in game 2 as they finished the game in 30 minutes. This time, 23Savage Drow Ranger and Moon Puck stood up and recorded 11 kills each over their 31-13 victory, while Iceiceice Snapfire tallied 23 assists.

After losing a 47-minute game 1 against OG.Seed’s army featuring Peksu Chen’s 23 assists and Chessie Void Spirit’s 14/5/15, Evil Geniuses evened the series with a 24-18, 32-minute victory after a monster 15/1/6 performance from Rtz Morphling and Ramzes Abaddon’s 1/4/17.

In their series against Thunder Predator, EG ends their day with a stomp after a 2-0 victory with both games lasting 21 minutes. In game 1, Ramzes Nature’s Prophet shows up with 13 assists while Crit Pangolier tallies game-high 6 kills to hell Rtz Naga Siren and Abed Ember Spirit go unkilled. For the next game, Crit Nyx Assassin shows another impressive performance with 13 assists while a carry Slardar from Rtz finished with 9 kills to help Abed Meepo record a 14k networth in their 21-12 victory.

After suffering a defeat from Fnatic, Team Liquid went on to stomp Envy’s Cloud9 2-0. In game 1, a 24-6 victory was pushed by Micke Gyrocopter who finished with 13/0/9 while the rest of Liquid tallied at least 12 assists, with Boxi Leshrac recording 20 assists. For the second game, a carry Micke Bristleback goes off as they defeat C9 over his 18/0/4 as Insania Keeper of the Light with Madness, Vlads, and Rapier finishes with 17 assists over their 23-11 victory.

In game 1 against OG.Seed, Team Liquid falls quickly at 22 minutes as their late game lineup is shut down by the draft of OG.S as the game ended with a 20k networth gap between the two at an 11-4 kill score. The next game, however, is a massive 44-minute bloodbath as both teams went back and forth, but Madara Sven’s 14/4/17 and Chessie Void Spirit’s 11/4/28 won OG.S the series at a 48-38 kill score.

In their series against OG.S, the Major contenders showed dominance with a 30-5, 24-minute victory behind LeoStyle Shadow Fiend’s 14/0/6, while Matthew Clockwerk and Frank Batrider tallied a game-high 18 assists each. For the next game, OG.S evened the series as Madara Faceless Void and Xibbe Ogre Magi tallied 10 kills each while Zfreek Rubick recorded 15 assists over the 32-13 victory.

After getting swept by EG, TP proceeded to fight C9 where they end Day 1 with a sweep. In game 1, a hard-fought 44-minute victory is earned by Thunder Predator after another great 14/0/8 performance from LeoStyle’s magic damage SF, while Frank Legion Commander and Matthew Rubick tallied 29 assists together over the 29-9 stomp. For game 2 LeoStyle SF continued to style on the whole Cloud9 again with the perfectly-timed Blink + Eul’s + Requiem combo as he finishes with 12/4/8 while Matthew’s Puck with Vlads and Frank Clockwerk both recorded 24 assists over the 37-9 stomp. 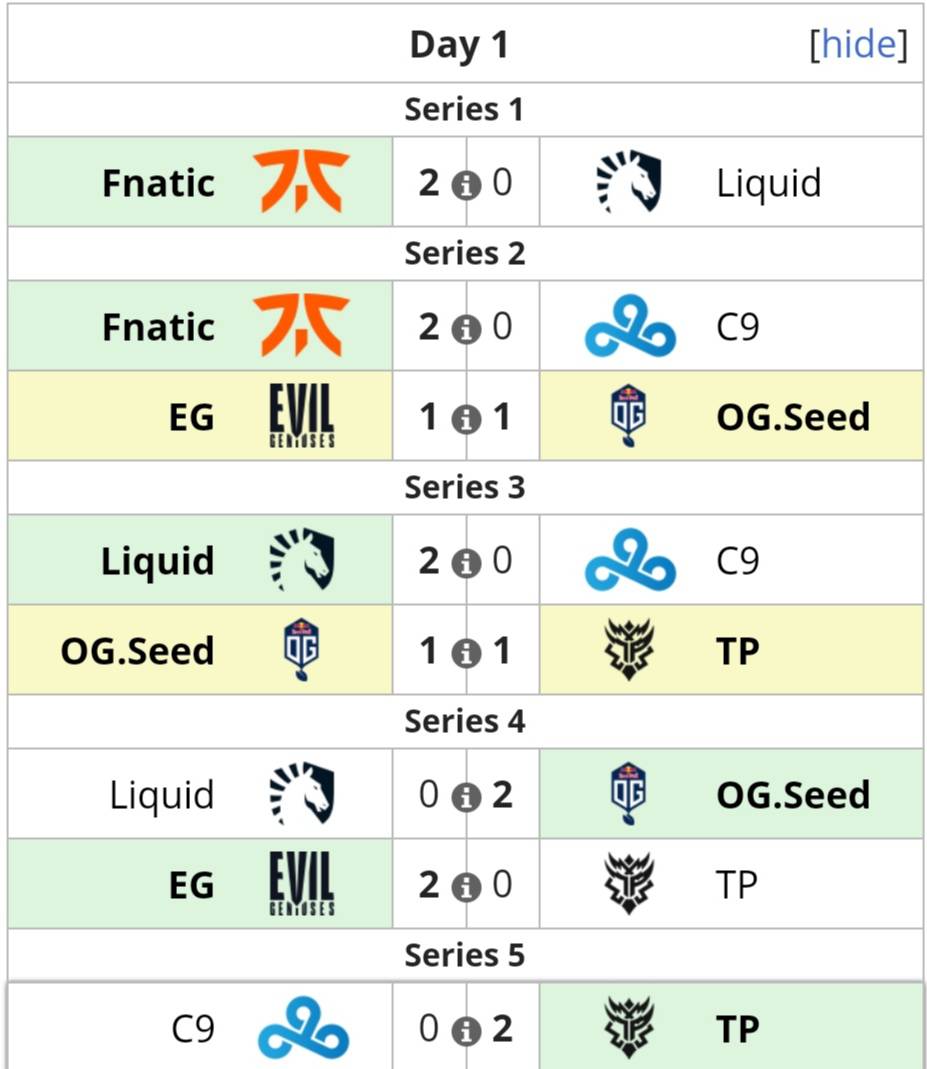 It’s looking grim for both C9 and Team Liquid, do you think they can recover on Day 2? Share your thoughts in the comments and stay tuned for more!