Aster: we contacted ana, but he has other arrangements

Aster: we contacted ana, but he has other arrangements

U.S visa, probably the biggest enemy for Chinese teams, while NA fans are excited to finally have a Major back to their backyard, players should actually worry about the possibility of their presence on the stage after they earned their ticket with effort and passion, a truly frustrating and tragic status quo. Everyone's pretty concerned about the visa situation for our team, people have been sending me DMs to ask me about that, couldn't reply to all of them, so here is the update.

Pan "Fade" Yi and ChYuan never went to the U.S before, Sccc's passport lost in Canada during TI8, and them three need to get a U.S visa for L.A Major.

Why can't you get it done in China?

The coronavirus situation, the American embassy in China has paused all visa issuance and not yet to resume.

Why not did it in Ukraine before the Minor?

This was our original plan. We kept a consist contact with ESL official. Ever since we made it out of the qualifier, we let ESL to recommended us a local travel agency in Kiev, the original plan is to pay the agency to arrange the visa interview for us right after we landed in Kiev. But words came when we were transferring flight in Munich that the reservation website for U.S visa updated an announcement said they "strongly suggest/encourage any visa applicant who has been to China in the last 14 days to alter their reservation to 14 days after leaving China." So taking that into consideration, go for visa application just 3-5 days after landed in Kiev would cause some subjective factors so the plan changed to just wait few more days. 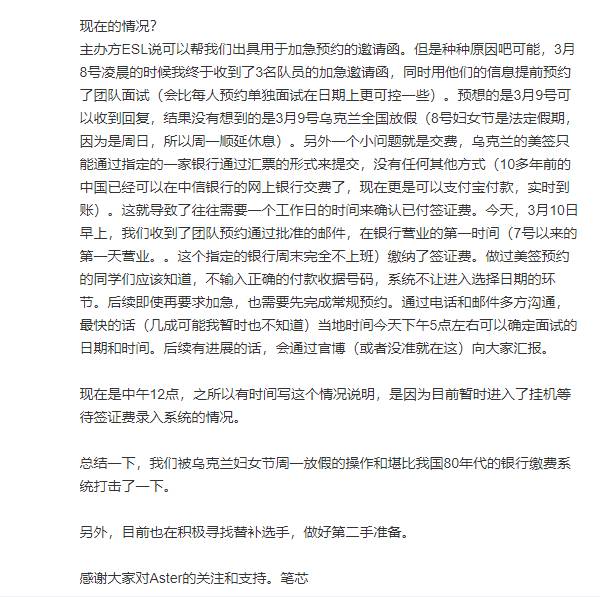 ESL said that they can issue an invitation letter for urgent applications. But due to many incidents, the letter arrived midnight of Mar. 8, and then booked a group interview (more flexible on dates compared to solo one). Expected to get the reply at Mar. 9, but didn't foresee that Mar. 9 is a national holiday in Ukraine (Mar.8 is IWD, but a Sunday, so national holiday on Monday as in Mar. 9). Yet another incident is payment, U.S visa in Ukraine only accept Draft from a designated bank, no other alternatives (China can use online banking for payment 10 years ago, now can be done in Alipay with instant transaction), which caused one more working day to confirm on the payment. Today, as in Mar. 10 we were finally approved for group interview, and we've made the payment as soon as the bank opened... If we are lucky, we should know by 5 pm local time about the schedule for interview. We will keep you updated.

Now is 12 am local time, that's why I'm free to update these for you guys, we can do nothing but wait.

In short, we were ganked by Ukraine national holiday on IWD and its super outdated banking system.

We are also actively looking for stand-ins to prepare for the worst.

Thanks to everyone for your concern and support. Love you all.

Thanks for the update, if (Sccc's) visa failed, let Xxs to invite ana god.

- Honestly, I've contacted him already, he said that he has other arrangements during that time.

Which means there is not even a exact date for interview by this far, it's Mar. 10 already 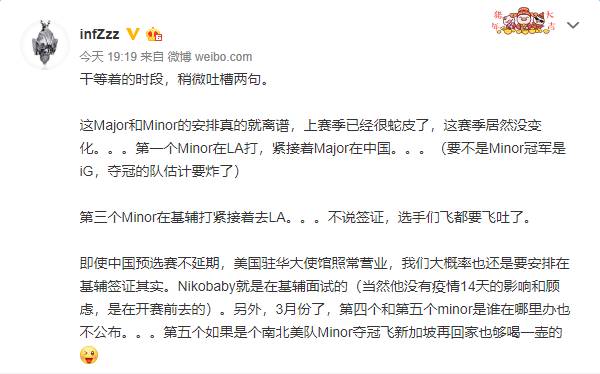 While just waiting, some roasts to do.

This season's arrangement with Major and Minor is outrageous, last season is pretty broken, and yet nothing changed... First Minor at L.A, then Major at China... (If IG wasn't the champion, the winner should be bombed by visa issue)

Even without the delay on China qualifier, and the embassy opened as usual, we probably still needed to get visa in Kiev. Nikobaby got his visa interviewed in Kiev before the Minor (but he didn't have the 14-days restriction). Plus, it's March now, and we don't even know where will the fourth and fifth Major to be held... If a SA/NA team wins the fifth Minor and fly to Singapore then fly home is also tiring. With a reliable source, Ame is not going back to PSG.LGD! Old eLeVeN is good! (note: It's confirmed form Zhou that PSG.LGD will make Chalice as pos-1, Maybe back to pos-2, Old eLeVeN as pos-3, fy and xNova as pos-4 & 5)

Viewers asked: How about VG versus Aster? rOtK: BurNIng just tipped me, I'd say that depends, fifty-fifty, see how drafts works out.

For now Aster's visa problem is unsolved, LaNm can play pos-4, but still two men short, recommend to get helpers from Nigma.

下一篇：Everything you need to know about the Dota Summit 12