After Lil’s stack ruined their chances at the LA Major Qualifiers, Nigma looked for an equal revenge as they open the fourth day of the WePlay! DotA 2 Tug of War: Mad Moon with a Bo3 Lower Bracket Quarterfinals against Aggressive Mode. After their deciding match in the groups of this tournament, Lil and Kuroky meet again as Nigma ends A-Mode's tournament run with a convincing 2-1 win. 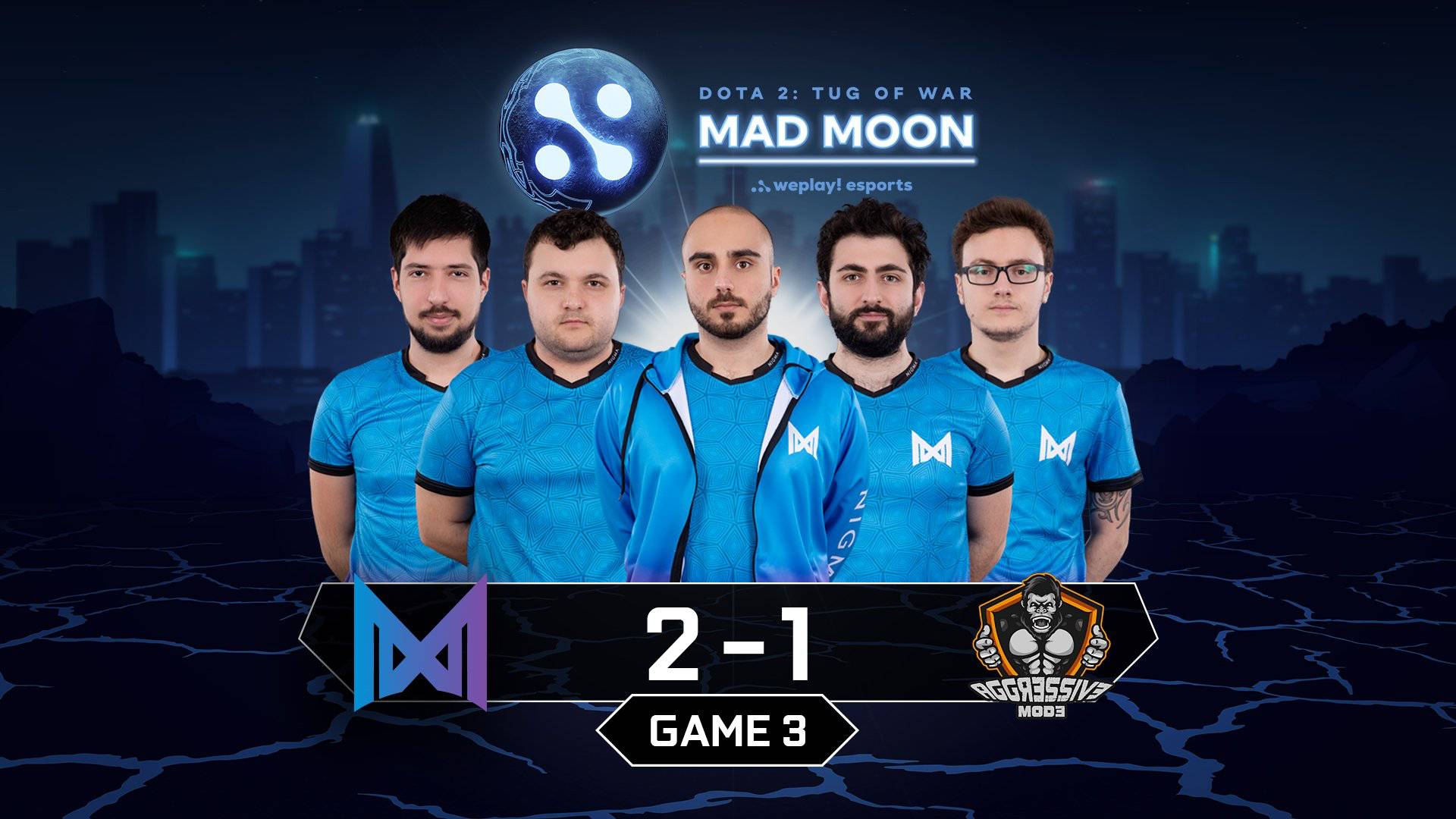 The early game A-mode took control with Oracle and Clockwerk trading hits, but rotations from W33 allowed Miracle to secure a 10-minute Armlet. With Underlord and Lifestealer pushing, the rest of Nigma just ran around chasing A-mode until A-mode's T2 towers. Gh’s Dagger helped Nigma to continue their manhunt. Nigma baits A-mode into the Rosh pit, but Nigma’s cores just went on to A-mode's backline to secure a 4-1 trade and get the Aegis for Miracle.

Despite isolating Mind Control and Miracle to pop the Aegis, Nigma’s buybacks responded quickly to some buybacks from A-mode themselves, and as they pick off A-mode one by one, Nigma ends the game at 22 minutes. The last pick Riki for A-mode seemed ineffective as Gh Slardar just locks them down 16 assists, while W33 recorded 11 kills and each member of Nigma recorded at least 10 assists over the 30-15 victory.n

Early game rotations from both teams sparked early brawls, but A-mode still takes the lead with three-man Chronos and Ghost Ship combos. Nigma continued to pressure by pushing towers as five while Void and Kunkka farm the free lanes. However, Nigma’s clowny draft seemed to lack its effect as A-mode began their own aggression as they chase Nigma around the map as they secure a 21-minute Aegis for Skiter. With Diffu and Manta on Void, A-mode sieges top and mid high ground.

After a five-man wipe, A-mode just crushes Nigma’s hope of recovery as they even the series behind a 42-5 victory backed by Skiter’s 10/0/18 and Skylark’s 7/1/22 performance.

Rotations from Nigma’s supports allowed W33 to take down mid t1 by 7 minutes to pin Alchemist away from farm while W33 solo kills A-mode's supports. Nigma began to control everything across the map and as Void Spirit and Alche ganks Mind Control in the dire top jungle, a sick Wall and juke on his Dark Seer allowed him to solo kill Void with the Alche illusion and take down Alche after the rest of Nigma catches up.

With an Eul’s and Aghs on Razor, Nigma began to siege towers and kills everywhere on the map with a 20k lead. They catch Void scouting and proceeded to get Rosh for Miracle as they attempt the top high ground.  With a three-man Vacuum + Wall combo, Nigma kills Alche without buyback as they finish the last lane of racks and take down each of A-mode's lineup. The 29-5 stomp of Nigma continues their Lower Bracket run thanks to W33’s 11/0/11 performance and Gh’s game-high 20 assists.

With their victory, Nigma continues their lower bracket run as they face Gambit Esports. Despite giving away a clowny game, Nigma still showed their lower bracket form as they convincingly send A-Mode home with $12k. Can Kuro and the boys reach the Grand Finals? Share your thoughts in the comments and stay tuned for more!