Dendi's squad bounces back in Day 1 of Mad Moon

Dendi's squad bounces back in Day 1 of Mad Moon

The WePlay! DotA 2 Tug of War: Mad Moon welcomed the most beloved personality in DotA—Dendi and his new squad B8 into their tournament. With their invitation, Dendi and his squad surely did not disappoint as they overcome a first-day exit as they sweep Infamous during the elimination match. 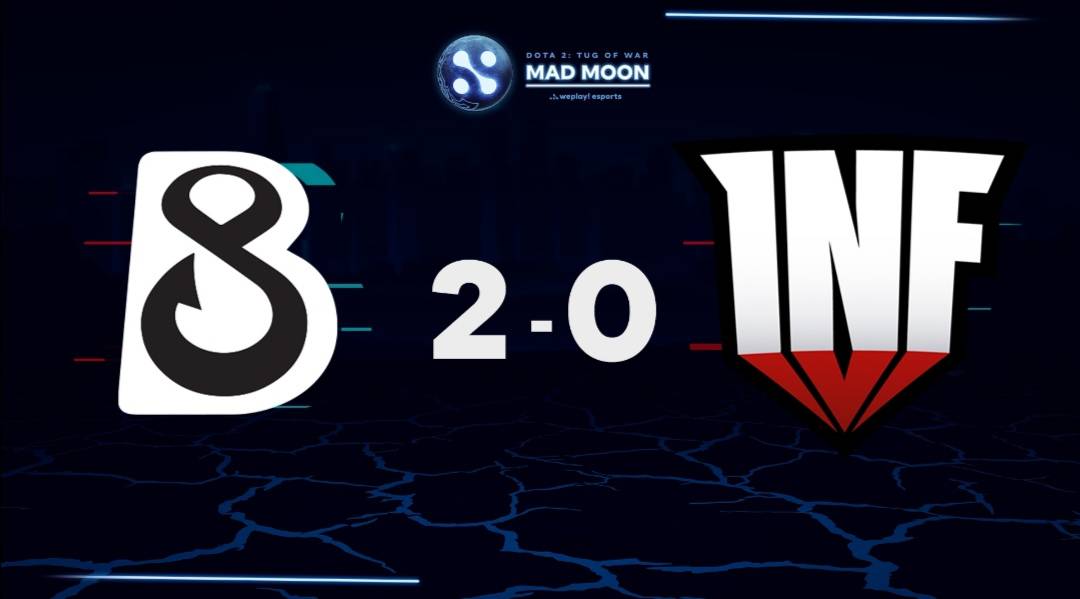 B8’s first series against Team Secret was a total sweep, but during their second game they were more in control of the game, it was only the Nisha Io pick that carried Secret to a comeback. Meanwhile, Infamous had a very shaky opening series against Gambit as the CIS team showed a very clean and impressive performance with two 25-minute victories.

B8’s pio65 carries for the win

For game 1, the game was in anybody’s side, but it was pio65’s Terrorblade that allowed B8 to pull off with the 38-minute victory. The early game was basically a slow back and forth with both teams trying to take the networth lead. However, TB already has Dragon Lance, Manta, and Skadi by 28 minutes, while Timado Bloodseeker just has Manta and Mjolnir. WIth an Echo + Fissure combo from KingR Earhshaker gave B8 a 5-0 that finally allowed them to take the networth lead. From there, B8 began to pull away and with B8 contesting in the Rosh, Dendi and boys were able to secure a full teamwipe, forcing Infamous to tap out behind pio65’s 15/2/10 TB and the game-high 18 assists each on Lebron Omniknight and KingR shaker over the 32-11 victory.

B8 shows a more aggressive approach in game 2 as they secure the sweep after 50 minutes behind Dendi’s game-high 14 kills and KingR’s 30 assists. The earliest teamwipe happened at around six minutes, where Dendi’s rotation at bot lane secured them a 5-0 trade. Infamous killed pio65 Faceless Void and Ghostik Timbersaw a few times, but B8 still stayed atop the networth charts. 33 minutes in, Timado Spec has Radiance, Manta, Diffu, and Aghs, allowing them to take down all B8’s cores in exchange of their supports which was enough for them to take the lead and control the map. However, KingR’s Coil on Infamous’ cores allowed B8 to jump in and take a full teamwipe at the expense of Lebron Apparition and Ghostik which returned the lead to B8. Dendi and the boys slowly chipped at Infamous’ base and as Dendi catches Spec in his Arena of Blood, the rest of B8 ganged up on him, and after a quick dieback, Infamous surrenders and calls it gg.

With this victory, B8 will be facing Gambit Esports, do you think Dendi and the boys will survive? Share your thoughts in the comments and stay tuned for more!

下一篇：Revenge has never tasted sweeter for Lil after eliminating PPD