Team Secret breezes their way through Day 1 of Mad Moon

Team Secret breezes their way through Day 1 of Mad Moon

The WePlay! DotA 2 Tug of War: Mad Moon kicks off today with eight teams in two groups went head-to-head in a series of Bo3’s. To headline this exciting tournament is a flawless and expected top seed run from Puppey and Team Secret after they beat B8 and Gambit Esports. 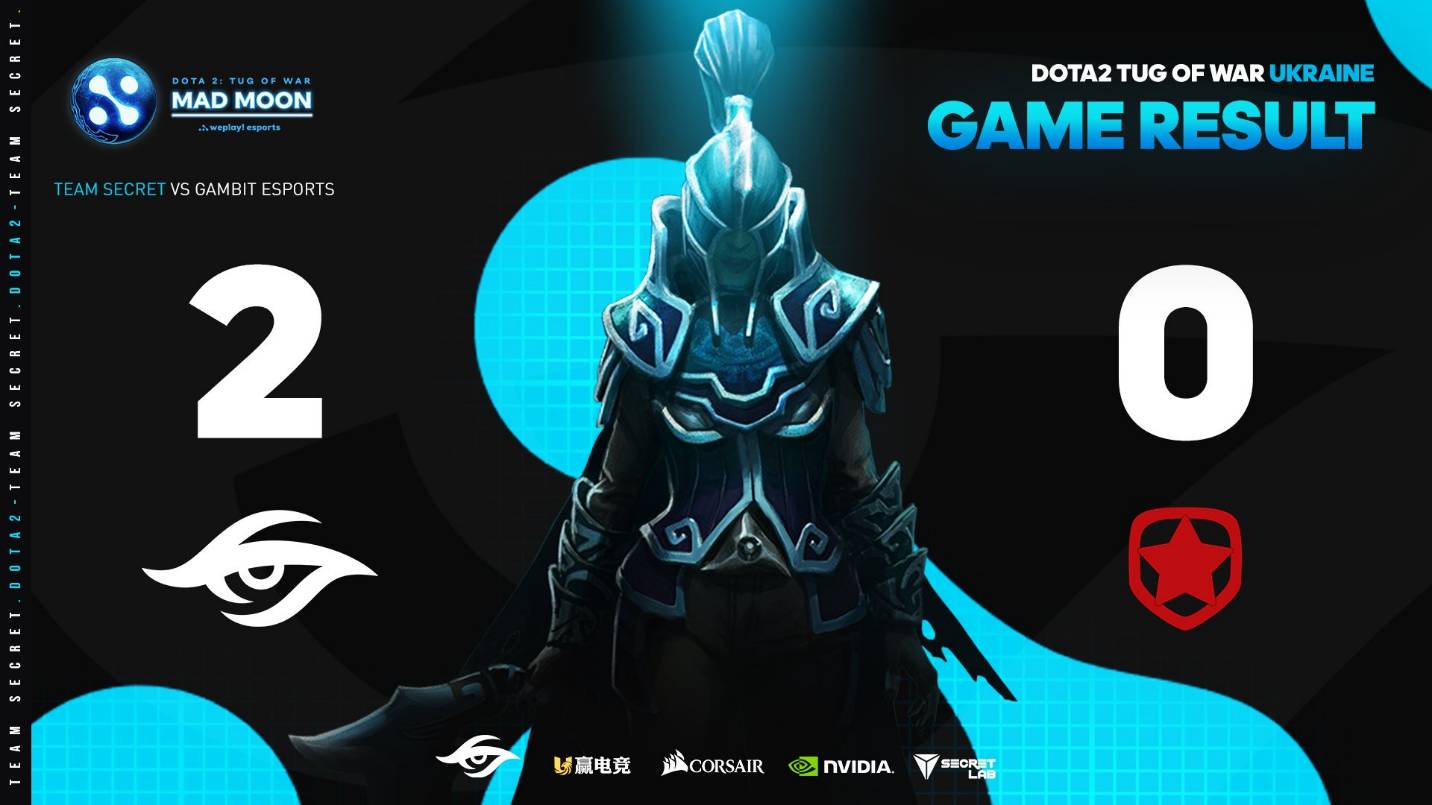 Puppey welcomes Dendi with a beating

For game 1, Dendi opens with one of his signature heroes, Puck as he faced a last pick Outworld Devourer for Nisha. Meanwhile, Puppey also his signature pos 5 Chen. With his own army of creeps, he made sure that B8’s cores died in their own hands. Team Secret began their charge as Nisha completes his Hurricane Pike, resulting in a 5-1 trade with a Sanity’s Eclipse damaging B8. From there, the networth lead just went up and despite initiations from Dendi and B8, they have no definite response to Secret’s very aggressive draft, forcing B8 to tap out at 24 minutes and 27-6 kill score where Puppey led the game with 20 assists while Nisha finished with a beyond Godlike 10/0/10 standing.

In the 50-minute game 2, it looked like B8 had the game, but Nisha Io and Puppey Nature’s Prophet came through to cap off the series in favor of Secret. The early game was a bloodbath as Secret and B8’s supports traded kills, but still Pio65 Phantom Lancer led B8 in their objectives. However, a clean teamwipe made by Secret on the Rosh pit ensured that even the PL with Aegis will not survive, allowing Secret to turn the 10k disadvantage onto their side. B8 even caught the Io with Mael, Aghs, BKB, Heart, and Cuirass, but Nisha just immediately buysback to finish their business as they take down B8’s throne led by Nisha’s 75k hero damage.

To open the winner’s match, Team Secret took a slow and steady win against Gambit after 40 minutes. The early game was a bit passive on Secret’s side as they did not respond successfully to kills on Zai’s Pugna. Secret traded a few kills, but it was on the 25-minute mark when Secret began steamrolling further. Nisha Windranger had MKB and BKB, while Fn Pango only had Diffu and Basher as Secret continued to kill Shachlo Night Stalker. With a SOD on Secret, they were able to burst down Pangolier as Secret goes to the backline of Gambit and with a 5-1 exchange, Gambit finally surrenders behind a 20k disadvantage. Nisha led the game with a game-high 26k damage while Matumbaman Juggernaut secured the game-high 12k building damage.

For the second game, both teams mirrored each other’s moves in pushing the lanes, but Fn’s overextension on Ember for a Puppey Nature’s Prophet made Gambit pay a 5-0 trade with the help of Zai’s Slardar. With Manta and Rad on Matu Spec by 20 minutes, Gambit finds Matu from a SOD again that led into a 3-1 favor for Gambit. Despite Gambit forcing Nisha Kunkka (with Malev, Mordi, and Halberd) to buyback, a four-man Chrono from Dream on his own teammates allowed Secret to force Gambit to back as they secure Aegis on Matu as well as the middle racks. Gambit responds to the separated Secret with a 3-0 trade on Nisha, Matu, and Yapzor Lion so they can push out lanes, but Secret chases Gambit towards their own base. Despite a Chrono on the whole of Secret, Gambit has no definite answer to clear out the tanky cores of Secret, forcing them to call gg at 40 minutes.

With Team Secret’s victory, they will be facing the winner from Group B which is either Virtus Pro or Nigma in the Upper Bracket Semi-finals of the playoffs tomorrow. Do you think the core and support MVPs of the tournament will come from Team Secret? Cast your votes at https://go.weplay.tv/hLYpB and don’t forget to share your thoughts in the comments and stay tuned for more!