The LGD slayer, AXX: I never thought that I would play against LGD

The LGD slayer, AXX: I never thought that I would play against LGD

It’s Axx from Team Blaze, a team formed out of just pure friendship and not a single bootcamp. When the DOTA2 community heard of the female streamer joining a team backed by the Old Boys, not many were too keen about it nor was there any high hopes for the team to make it through the open qualifiers. But the team proved us wrong after they managed to qualify for the closed qualifiers of the ESL One Los Angeles major.

But really, the hot headline that really shocked the DOTA2 community and the pro scene too, is that Team Blaze defeated PSG.LGD in a best-of-3 series! While many could say that PSG.LGD are not in their “prime” form due to not having Ame and needing to swap out Ahjit with ASD (due to Ahjit being an amateur pro), they are still a big deal since the 4 players in it consisting of Fy, Somnus, Chalice and xNova, are TI8 Grand Finalists and also TI9 third placers. Thus, they do still hold a great title for being the strongest Chinese team in TI9.

Unfortunately, Team Blaze’s days are numbered as the regional qualifiers prove to be a bigger challenge than PSG.LGD. The team could not win any series but still managed to get 2 ties and 2 losses. Team Blaze is eliminated in the groups for being the last placed team in the Chinese regional qualifiers. While Axx fans were pretty upset about their “big head sis” leaving the qualifiers too soon and didn’t qualify for the major, it turns out Axx was pretty delighted with her team’s performance and experience she had. 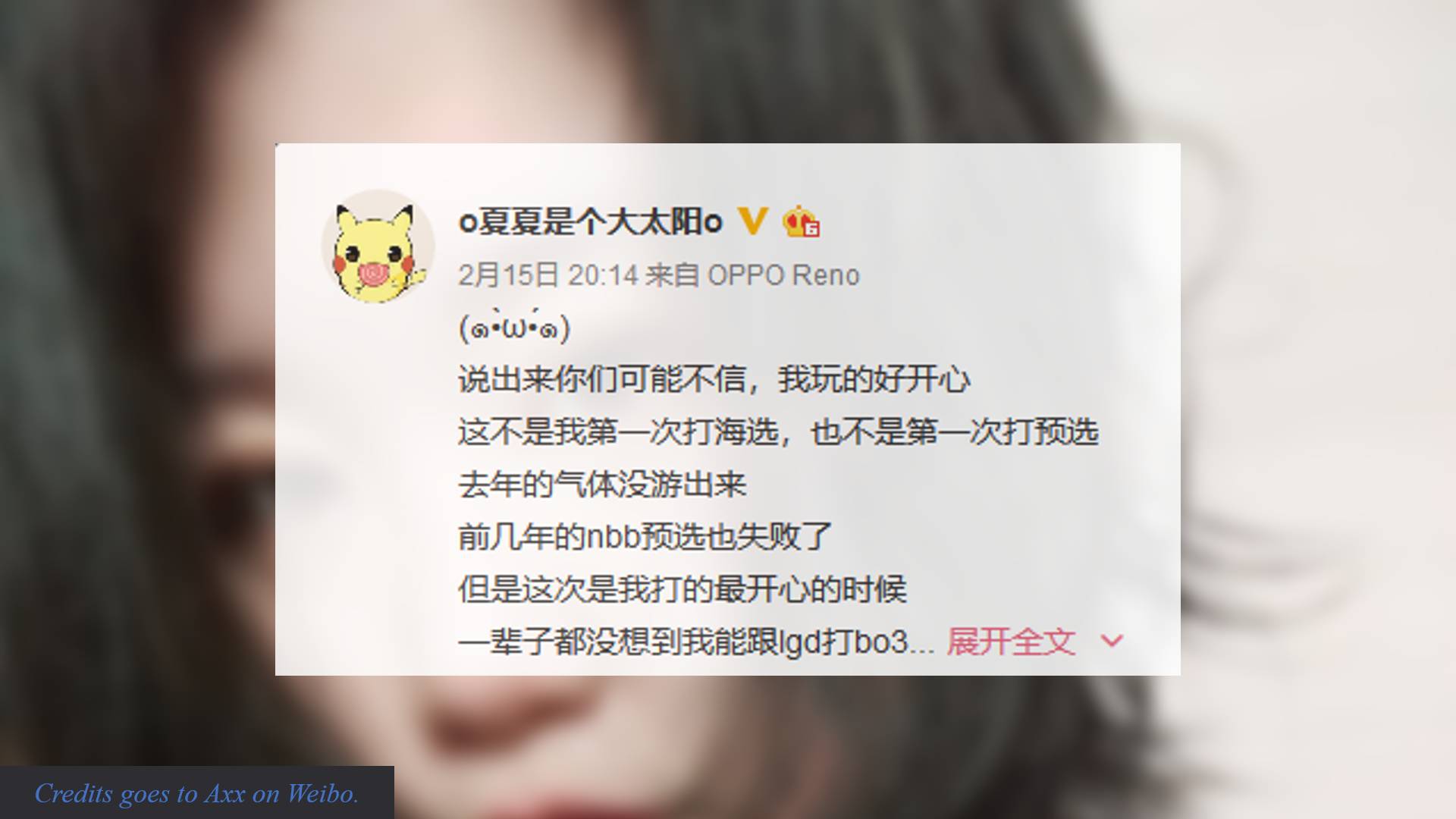 In a recent Weibo post by Axx, she wrote about her past journey in pro DOTA, where she once played for Newbee.Boss (sister team) but never really made it out of open qualifiers. Thus, to be able to achieve such feet in these recent qualifiers, she could not be any happier. She (and no one) really expected her unseasoned team to make it into the regionals, let alone face PSG.LGD and defeat them in a best-of-3 series. Of course, she deserves some credit for playing really well too. Here’s a game where she played Puck offlane and managed to juke a gank that would have killed any ordinary player. Her play managed to keep her alive and even bought enough time for her mid Void Spirit to counter-initiate on the enemy heroes, killing them both for their foolishness.

Needless to say, Axx deserves the title as one of the best female DOTA2 player and she definitely lived up to her name. Hopefully, we get to watch more action from Team Blaze in the next major qualifiers. For her, the next stop would be to qualify for a major, stay tuned.