Riot Games has parted ways with its CS:GO roster after recent changes to the ESL Pro League qualification structure forced the organization to take a break from competitive CS:GO. The ESL Pro League recently reduced its number of teams from twenty-four to twelve. The sudden change in plans caught several teams unawares who were suddenly relegated to the lower-tier league.

We’ve maintained an organizational goal of making it to Pro League this season, however between the changes within ESL and our inability to qualify through MDL finals, we’ve decided to take a break and regroup on the sidelines. We’ll be looking to make an entry back onto the scene after we feel more comfortable with the future structure and direction of the game.

Riot Squad’s CS:GO entry in June 2019 saw them pick up a North American roster comprising promising players from the region.

The ESL Pro League faces stiff competition from the likes of BLAST Premier and now the newly launched FLASHPOINT League.

The players will stick together despite losing the support of the Riot Squad organization. They will compete under the name Bad News Bears and the roster comprises the following players: 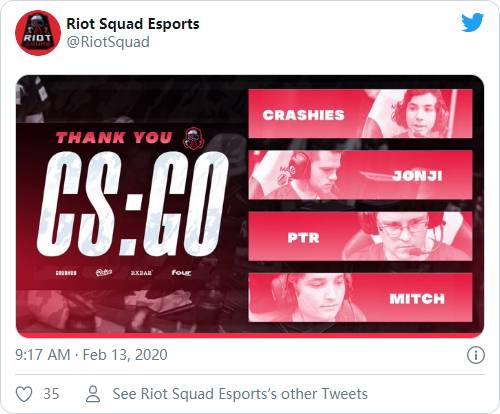