The Grand Finals was a Best of Five series with Mousepsorts choosing the first map of Dust 2. The International team is currently the second-best team in the world and their performance at the ICE Challenge further cements their place in CS:GO rankings.

20-year-old Robin "ropz" Kool had a stellar performance on Dust 2, putting up strong defense on the B bombsite. His positioning allowed him to take risk-free duels and he would get multiple kills on occasion.

Na’Vi took an early lead on Dust 2 on the terrorist side, however, Mouz was able to claw back into the half on the back of some individual plays. On their T side, however; Mousesports was too strong for Na’Vi to handle. Na’Vi had a recent roster change when they brought in Perfecto to replace GuardiaN on their CS:GO roster. The roster change resulted in role-changes within the team, a shift that will take time for the players to adjust. Mousesports won Dust 2 16-14, after an extremely close map.

The second map of Inferno saw the two teams compete toe to toe through th first half. With the score 9-6, it was an even game and neither team had an advantage. However, Na’Vi’s T-side tactics failed miserably compared to the regular aggression on the CT side Mousesports. The young players on the Mousesports roster were not afraid to take risky peeks and constantly surprise their opponents.

Their aggression paid off as Na’Vi did not manage any leeway on their T side. Mousesports won seven rounds on their CT side compared to Na’Vi’s 6 and won Inferno. Inferno was Na’Vi’s map pick and a loss here hurt their chances to take the series.

The CIS team had a very dominant start to Train, focussing on their strong CT side defense. As Muosesports tried various iterations of their attack, trying to poke at Na’Vi’s weak points, the rounds slipped by and Mousesports was staring at a 5-9 scoreline at one point in time.

Mousesports won the second pistol and the subsequent round, but Na’Vi’s aggression on their T side was too much for the Mousesports team to handle. With a weakened economy and lack of AWPs, Mousesports could not contain the duo of S1mple and Electronic.

ChrisJ did have a 1v5 clutch moment on the T side; however, there was not any silver lining for Mousesports despite a few individual performances. Na’Vi won Train 16-11 to give some hope to CIS fans for a comeback.

For many CS:GO fans, Train and Nuke represent a similar playstyle. The two maps are very CT oriented and teams rely on a strong economy to win rounds. Ropz was back in action on Nuke as he top-fragged the server against Na’Vi.

Mousesports had an early lead with a 7-2 scoreline and took advantage of the early game lead to secure an 11-4 half. Mousesports eventually won the map 16-9 and with this victory took home the title of being the GG.Bet Ice Challenge 2020 Champions. 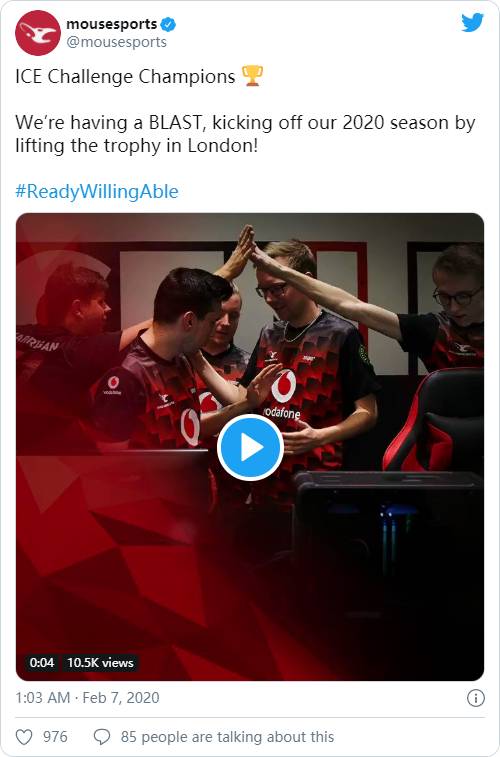