GODSENT have locked down a rematch with Natus Vincere in the semi-finals of ICE Challenge after dispatching of Virtus.pro on Dust2 (16-9) and Vertigo (16-13).

GODSENT’s opening LAN event of the year has continued to yield positive results as the international squad have built on their promising end to 2019 with progression to the ICE Challenge semi-finals after taking down Virtus.pro, who once more end a tournament in lacklustre fashion with a 5-6th placing.

The second quarter-final of the day kicked off on Dust2, Virtus.pro’s map pick, where the two sides could barely be separated in the first half. Early success from Dzhami "Jame" Ali’s troops earned the Kazakh side a 5-3 lead on the defence before GODSENT eventually found their footing to close out the half with a narrow 8-7 advantage, with Pavle "Maden" Bošković leading the charge.

As GODSENT swapped over to the CT side, the international squad hit a higher gear. Dropping just two rounds early on, Kevin "kRYSTAL" Amend’s men steamrolled their way through the half, with a Martin "STYKO" Styk 1v2 clutch at 11-9 ensuring control stayed with GODSENT. From here, GODSENT swiftly shut down Virtus.pro at 16-9 to draw first blood in the series.

GODSENT carried over their momentum to Vertigo where a rapid 4-0 start was acquired, but a triple kill from Alexey "qikert" Golubev broke the streak to allow Virtus.pro to post three rounds on the board. Only two additional rounds could be secured by GODSENT in the half as the Kazakh side unrelentingly locked down the remaining six rounds to lead 9-6 at the halfway mark.

The map looked as if it was about to go from bad to worse for GODSENT with Virtus.pro picking up the second half pistol, but a quick double kill from kRYSTAL in a force buy kicked off a five-round streak for the international squad, who took an 11-10 lead. Fighting for their tournament lives, Virtus.pro continuously pressed GODSENT to level the score at 13-13, however, with a spot in the semi-finals in sight, kRYSTAL's troops stepped on the gas to edge over the line at 16-13 and take the series 2-0. 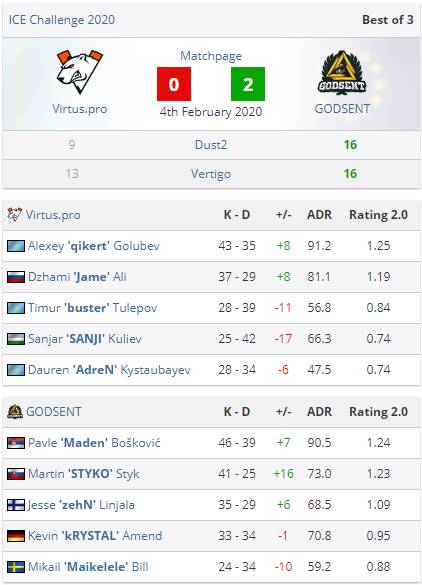