OWL cancels February, March games in China due to coronavirus

OWL cancels February, March games in China due to coronavirus

The Overwatch League is the latest esports organization to cancel events in China due to concerns about the coronavirus outbreak. The league announced today that all Chinese homestands in February and March would be canceled “in order to protect the health and safety” of players and staff.

Five total homestand weekends are affected by this cancellation. Shanghai’s homestand, from Feb. 15 to 16, was to be the first weekend of games held in China. The Hangzhou Spark were set to host games from Feb. 29 to March 1. The Guangzhou Charge is the organization most affected by this sudden change, with three of their five total homestands canceled due to the corona virus. Those homestands would have taken place Feb. 22 and 23, March 14 and 15, and March 21 and 22. 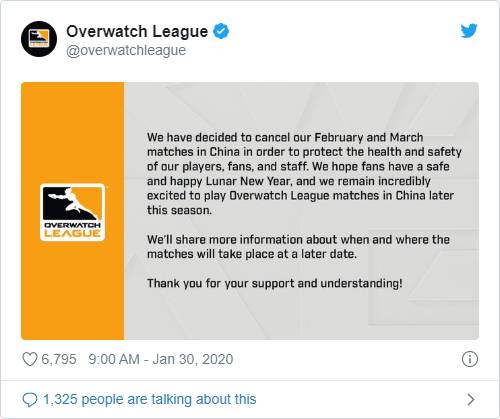 Multiple Overwatch League teams have recently relocated their practice facilities or taken precautions to counteract the quick spread of the coronavirus. Earlier this week, the Guangzhou Charge moved their training base to South Korea. They’ve moved most of the team and are working on expediting visas for Chinese players. The Shanghai Dragons relocated the entire team to South Korea amid concerns of the virus. Since the majority of the team are South Korean nationals, visa issues were less of an obstacle.

Earlier today, the Chengdu Hunters announced they’d be staying in China despite the threat of the coronavirus. As a fully Chinese team, the availability of visas is likely an issue. The team promised they would be checking players and staff and maintaining safety as best they can.

In the announcement, the Overwatch League said it will share more information about “when and where the matches will take place” at a later date. The league is set to begin Feb. 8 with homestands in Dallas, Texas, and New York City.