With only 8 teams remaining, 3 teams exit today after three incredible series where Evil Geniuses and Liquid eliminate their foes to continue their run at the Leipzig Major. 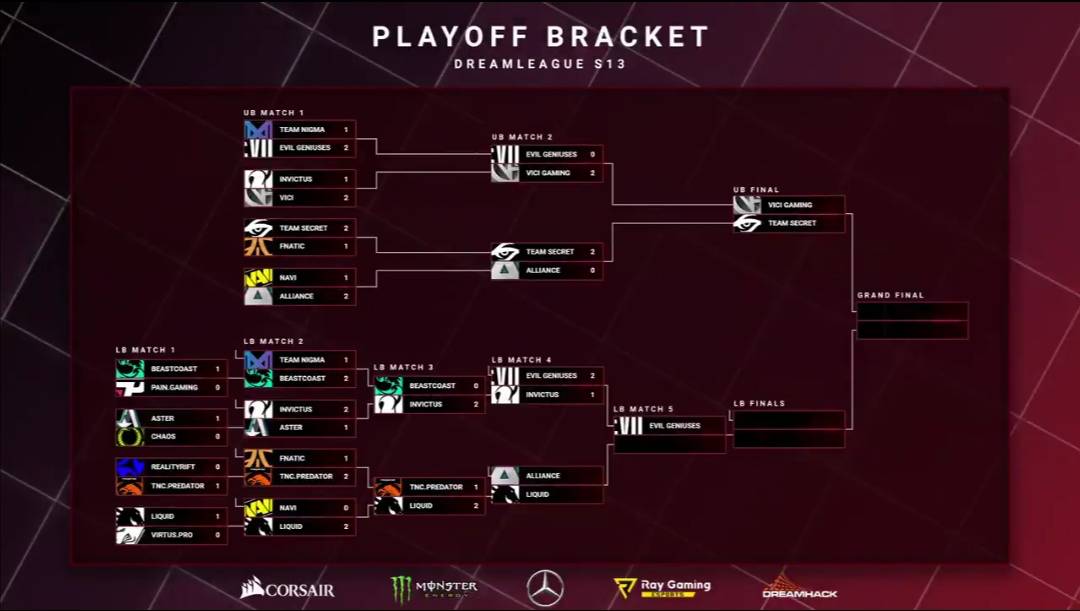 For game 1, Invictus Gaming immediately applied pressure to Beastcoast as JT Sand King took kills and rotations to help Emo Leshrac get farm. As IG tramples them with magic damage and bursts, Flyfly Slark just farmed freely while Beastcoast is having a hard time securing objectives. The JT and Emo combo proved to be a dynamic duo in ripping Beastcoast, but a Dream Coil and Skewer combo from Scofield Puck and Chris Luck Magnus helped them even the fights. However, the unsung hero of the game was Oli Io were he manages to save IG’s cores with his last-second heals. Even when Beastcoast bought BKB’s, Slark was just there to hit them until the duration ends. After a teamwipe from buybacks, Beastcoast taps out at 50 minutes with a 51-24 defeat because of Emo’s 20/2/19 Leshrac while Oli Io finished with a game-high 28 assists  as well as 28k healing.

In the second game, Beastcoast finally returned to their much aggressive form as they went head-to-head with IG as Lelis Underlord lead the fights while the rest of Beastcoast lock down Flyfly Phantom Lancer. The illusions on Flyfly and Emo Arc Warden were enough to push all outer towers, but the disables from K1 Doom, Scofield Tiny, Chris Luck Puck, and Stinger Bane is enough to keep IG away from their racks. However, the spam skills from Kaka Skywrath and Oli Lich paid off as IG penetrates high ground for the kills. What seemed to be a successful defense from Beastcoast quickly changed as JT Legion Commander locked down Lelis and K1 with Duel to kill them with no more buybacks left. The rest of Beastcoast tried to hold on to their throne, but the illusions from Emo and Flyfly were too much to handle. At 47 minutes and 30-30 kill score, IG successfully completes the sweep behind Emo’s massive 90k hero damage on Arc Warden.

In the opening game, the heavy-hitting cores of Micke Drow, Qojqva Viper, and Boxi Slardar ran rampant throughout the map as they tear TNC one by one. Despite nukes on the side of TNC, the saves from Insania Oracle kept Micke alive to take each one of TNC. TNC tried to contest Rosh, but they only found themselves struggling as the armor reduction from Slardar made them more squishy. Liquid’s kiting on TNC’s spells allows to secure the kills on TNC’s cores without buybacks. A 13/0/8 Micke Drow Ranger lead Liquid to a win after 34 minutes.

Despite a Morph+Shaker combo from Liquid in game 2, TNC managed to hold through Armel Templar Assassin as they secure kills around the map in the early game. However, saves from Insania Oracle still balanced out team fights. It was only when Kpii Abaddon and Tims Disruptor got their Aghs that allowed TNC to siege high ground. With March Chen’s heals and Abaddon’s ults to absorb some incoming damage, Gabbi Lifestealer and Armel finally took down Liquid’s cores without buyback. Kpii’s 0/0/14 Abaddon is the record for the most assists in this second game and with a total of 14k heal along side Chen, Liquid finally calls gg after 44 minutes.

The deciding game was a battle among the pos 4’s as Taiga played Enigma and Tims with his famous Earthshaker. However, the early game for TNC looked rough as Liquid looked for fights to delay Gabbi Slark’s farm with their heavy magic damage. TNC only repelled fights through the heals of March Chen and Kpii Omniknight, but as soon as Gabbi and Armel SF got their core items, TNC began swinging back and turned the game in their favor. The game went on and Taiga secured a Refresher Orb to catch Slark with two Black Holes and allow the rest of Team Liquid to nuke TNC, but the great Tims retaliates with multi-hero Echo Slams to deny Liquid access to their high ground. TNC was forced to buyback on slark, but another great Black Hole from Taiga catches Gabbi to give Liquid and opportunity to get racks. As TNC defends, Liquid catches Armel to force him to buyback and defend their T4s, but despite their efforts, another incredible Black Hole from Taiga to catch SF allowed Team Liquid to burst him down and finally, taking the series 2-1 after 55 minutes of incredible back-and-forth action between these incredible teams.

The last series of the day began with an aggressive Treant and Wyvern combo from Fly and Crit as they pressure Flyfly Slark. EG’s supports roamed to give Rtz Razor some space and despite gank attempts from IG, Emo and the rest of IG just lose their cores because of quick responses from Abed OD and Ramzes Tinker. Beautifully-executed ganks from EG allowed them to take down Emo Storm as they push for T3. EG built Halberd and Hex on Slark to ease their push, and in a long drawn fight, Crit gets a four-man Winter’s Curse, and after it, Abed drops the hammer and secures himself a rampage to get IG to surrender game 1 at 27 minutes. The 11/0/2 and the Astral Imprisonment saves from Abed allowed EG to take game 1 with ease.

IG turned up their playstyle as they were the ones to take the offense with the help of Flyfly Clinkz who secured a 15-minute Desolator. Ramzes Abaddon first built a Pipe of Insight, but IG took advantage of their physical damage to stomp each of EG for they know Rtz Anti-mage can’t come online early on. They tried to high ground, but Rtz fights and gives EG a triple kill. However, a quick Rosh from IG gives them an advantage, and despite a sod from EG, a two-man blind stun from JT Centaur secured them four kills as AM barely escape. Two of EG tried to defend, but another great stun from JT allowed Flyfly to kill AM and force a game 3. EG call gg at 37 minutes after a game-high 10 kills from Clinkz and a record 16 assists from JT.

For the deciding game, IG carried on their aggressiveness from the second game, but this time EG responded better as Abed Storm, Fly Chen, and Crit Doom fought back. EG couldn’t crack a 4v5 as they wait for Rtz Lifestealer to farm, but the first moment they fought as five, EG secure themselves a teamwipe  to get IG’s racks. Despite a total ambush on Abed near the Rosh, EG finishes the Rosh and still takes down most of IG to attempt and take the last set of racks. EG catches again three of IG to force buybacks, but the EG’s damage together with Ramzes Venomancer claim their lives again. At 32-15 and 33 minutes, IG surrenders as EG ends their tournament life behind Abed’s 15/3/11 with 27k damage and Fly’s 3/4/23 performance.

With these victories, EG will face the winner between Liquid and Alliance. What do you think of these series? Share your thoughts in the comments and stay tuned for more!