Nigma defeats RNG to be the Bukovel Minor Champions

Nigma defeats RNG to be the Bukovel Minor Champions

With their rematch since the Upper Bracket Round 1, Nigma and Royal Never Give Up went head-to-head, but Nigma successfully showed why they are called the Lower Bracket kings as they defeat RNG 3-1 in the Bukovel Minor, January 12. 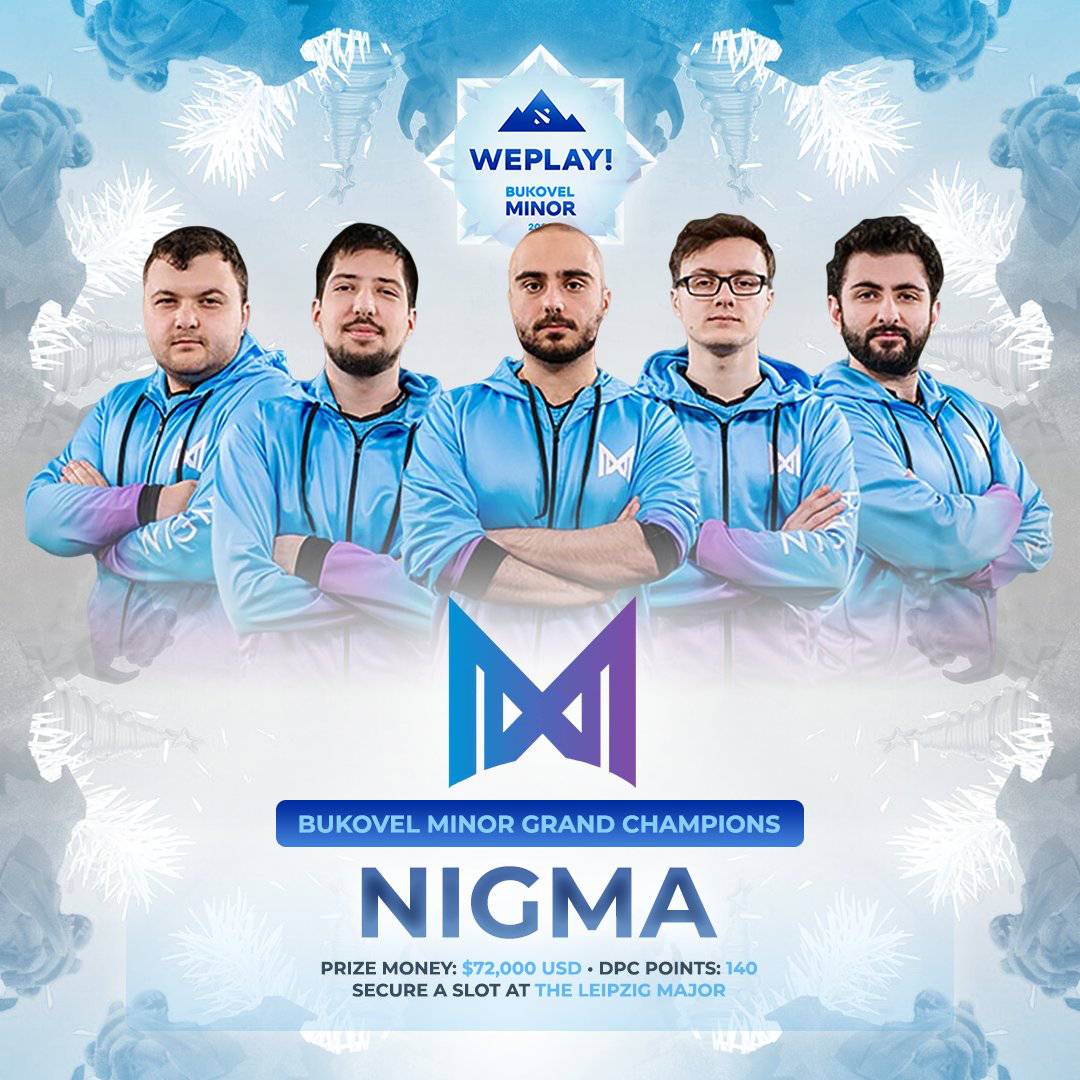 RNG kites their way to game 1

For game 1’s early game, an aggressive lineup from RNG pressured a defensive draft from Nigma with a last pick on Miracle Alchemist. A 12-minute Armlet for W33 Huskar allowed Nigma to control the map with his ganks and secure a 4-0 with a godly toggle from W33 as Kuroky Abaddon protects him.

September Treant’s Protector used Meteor Hammer on Huskar that allowed RNG to get two kills and two top towers as they begin their offense. 31 minutes in, Nigma secures a Rosh kill, but Flywin Centaur takes the Aegis and with their kiting, RNG gets a 4-0 trade to secure mid racks.

Monet Drow and Setsu OD just rips through Nigma’s defense as they force four buybacks on Nigma’s high ground. As RNG goes to T4’s, a four-man Overgrowth from September seals the deal as RNG focuses the throne to take game 1 at 38 minutes behind Monet’s 10/1/15 and September’s 2/1/22 performance.

In the second game, both teams’ tried to choke each other’s farm, but Nigma comes out on top as they lead the kill score 6-2 at 14 minutes. Despite a solo Echo from GH, Nigma gets a 4-2 trade and begin to claim map control. RNG decides to group up to take a tower and greatly secures a 4-1 trade in their favor.

With a 22-minute MKB on W33 Windranger, Nigma took their window and quickly picked off three of RNG and their bot T2 as well as Aegis for Miracle.  30 mins in, a Butterfly, Heart, Manta, and Diffu on Miracle PL gets another Aegis as they attempt high ground. Kuro Batrider forces RNG out of the top racks, but RNG takes the challenge and rips the Aegis off and get a 3-0 trade and a mid T2.

Nigma attempts an RS, but September Doom ults the real PL to force him to buyback, but RNG just rips them again and takes a 4-1 trade as well as Aegis for Monet and Aghs blessing on Setsu Queen of Pain by 46 minutes. A double Doom from September takes down Nigma’s supports and top racks, but Nigma charges for QoP.

A Rapier purchase from PL at 53 minutes allowed Nigma to win a 2-1 trade as they attempt high ground as they force bb on QoP and Doom. In an attempt to contest RS, RNG gets WR, but a wrong blink from Setsu allowed Nigma to kill him and get Aegis for W33 and aghs on PL as they secure mega.

81 minutes, two Aegises, and six tier 5 items later, team Nigma chokes RNG in high ground and with both teams with full buybacks, it was a very long fight but RNG’s cores finally died back and finally Nigma finishes the throne to tie the series with 36-38 kill score and a monster 49k Net Worth Phantom Lancer from Miracle.

Game 3’s draft looked more promising for Nigma as they get Miracle PL and W33 Templar Assassin, while RNG got a Monet Drow and Super Vengeful combo. A heavy-hitting GH Elder Titan helped Nigma take the lead with their kills. A rotation from September Disruptor forced an early team fight with RNG getting the upper hand after a 3-2 trade. A 17 minute Aegis for W33 allowed Nigma to secure a 2-1 trade with a T1 tower.

Nigma gets RNG one by one to force some buybacks as they push high ground. They successfully take off the mid racks with Miracle and W33 diving, and surprisingly, RNG taps out at 23 minutes with 25-11 kill score behind Miracle’s 11/1/5 and W33’s 4/1/7 impressive performance.

Nigma began to step on the pedal as GH quickly picked off assists over the map. Before the first Outpost, Setsu rotates and RNG begins to push. Despite a three-man Echo from Gh, RNG counters with a 2-0 trade and help Monet get an 18 minute Radiance to further push the map.

RNG secures an Aegis for Monet, but Nigma just responds with a kill on Omni and Chen as well as get two mid towers, but RNG does not let this slip and takes a fight to punish Nigma’s overextension at the expense of their Aegis and 1 buyback.

Despite a fight on Nigma’s shrine, RNG just shuts away their combo as Spec and RNG gets a 3-0 trade and Aegis for Setsu by 38 minutes. A five-man sod from Nigma backfires as they sacrifice 3 of their heroes for a Chen and take mid racks.

Another Aegis goes for Monet as they attempt another high ground at 50 minutes, but a five-man Vacuum + Wall + Echo allowed Nigma to remove Spec’s Aegis and secure a teamwipe in Nigma’s favor as well as the mid racks.

Monet and RNG secure another Aegis to try high ground at 60 minutes and get the bot racks, but a combo from Nigma gets Spec’s Aegis and force buybacks on Doom and Spec. Another well-executed combo from Nigma allowed Miracle to hit T4’s and as W33 continued surviving, GH and Mind Control made enough space and eventually forced die backs on RNG’s cores.

Finally, RNG’s throne goes down after 64 minutes with an insane 20k comeback from Nigma. With this victory, Nigma will be the final contender for the Leipzig Major. What do you think of their performance? Share your thoughts in the comments and stay tuned for more!

下一篇：Nigma are victorious at the first DPC event of 2020