MAD Lions booked a spot at IEM Katowice 2020 after defeating ENCE 2-0 in the lower bracket final of the European closed qualifier.

The Finnish team's crisis deepens as they will miss out on one of the biggest events of the year, one where they enjoyed a dream run to the final in 2019, after losing two qualification series. The defeat to FaZe, who sit above them in the rankings, in a three-map series, had hardly come as a surprise, but the same cannot be said of Friday's contest, in which the Finnish team were simply outplayed and looked alarmingly devoid of ideas.

The qualification for IEM Katowice comes as a massive boost for MAD Lions, who continue to defy the odds. Nicolai "HUNDEN" Petersen's charges have enjoyed massive growth in the last six months and will now get to play their first Big Event.

A failed anti-eco against nothing but Glocks marked the beginning of a painful start to the series for ENCE on Overpass, where the Finnish team had been humbled by Illuminar the day before. Aleksi "allu" Jalli's troops then got a footing in the game and went into the break down by just three rounds, but MAD Lions' dominance was absolute in the second half as they quickly wrapped things up with a resolute defensive performance.

ENCE came out on Mirage looking a different side and began to build a decent lead early on. However, their improvements were undone once the Danes got into their stride, with three rounds once again separating the teams at the break. After switching to the CT side, ENCE could not keep up with MAD Lions' pace and never looked like troubling the restless Danes, who comfortably ran away with the game. 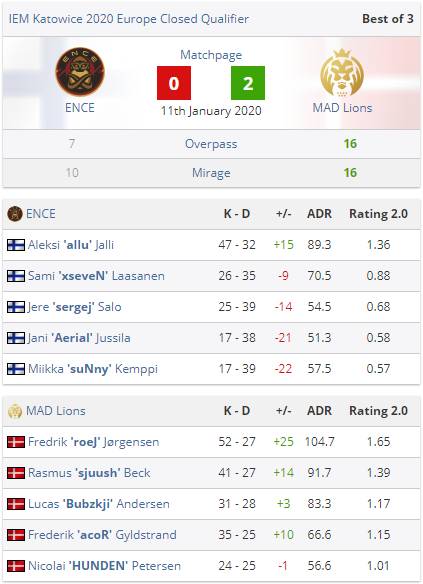 With the qualifiers in Asia, Europe and North America all over, there is now just one spot at IEM Katowice on the line, which will go to the winner of the Oceanic qualifier, scheduled for January 14-16. The Polish event will be held from February 25 through March 1, with $500,000 on offer.

The team list for IEM Katowice 2020 currently looks as follows: