Gambit with the insane Slark game.

Gambit with the insane Slark game.

The second last day of Bukovel minor started off with fan favourites, Geek Fam, versus the top seed, Gambit Esports. After managing to secure playoffs for the first time ever, Geek Fam continued to surprise fans and upset teams who underestimated Geek Fam for a pushover team because that’s nothing close to what it seems.

That said, Gambit still held off Geek Fam really well in the second game of this series, thanks to Gambit’s hard carry, Dream, on Slark.

In game 1, Gambit starts off the game with a very strong draft, having Chen, Magnus, Tiny and Leshrac in the mix. They were even winning the lanes until midgame, having a consistent 5K gold lead. Yet, despite how strong their line-up looked on paper, Geek Fam played Gambit hard, forcing Gambit to overextend in teamfight.

Geek Fam’s draft were more towards the defensive side, as they have Drow Ranger as their carry. Thus, having Treant Protector and Omniknight were ideal for keeping not just Drow but everyone else alive. Eventually, Geek Fam managed to outlast Gambit in fights until they ran out of buybacks to try again. Just like that game 1 went in favour of Geek Fam seemingly.

Chapter 3: Insanity in a game.

Just when we expected Gambit to lose their motivation to play on in the second game, they came back harder than the last game. The game went fairly even for the first 30 minutes of the game. While Geek Fam’s support, Dubu on Batrider has been feeding a whopping number of deaths along with Kuku’s Legion Commander, they were merely making space for their true carry of the game, Raven on his Naga Siren.

Heading into 45 minutes, despite having more kills than Geek Fam, it looked like Gambit didn’t have any answers to the Naga Siren issue who has been controlling every lane with her split-pushing illusions. Her illusions alone were even able to solo-kill a support Lich!

Just when the game seemed unthrowable, Raven was too overconfident, thinking that Gambit will never be able to catch her as she has Cheese with Song of the Siren ultimate. However, he screwed up as they managed to kill him because his teammates were too far away. Just like that, the chain feed went on and Gambit managed to destroy the mid barracks for Raven’s huge mistake.

As the game suddenly turned into Gambit’s favour, Gambit.Dream on Slark tried to be a little sneaky by attacking at the back of Geek Fam, only to end up losing his life when Geek Fam disables him permanently. The fight went on as both teams fight and expend their buybacks to join a prolonged fight between both teams.

Despite Gambit’s smell of comeback just a moment ago, it was finally decided that Geek Fam wins the series as they destroy Gambit in their own base, making FNG call GG at once. 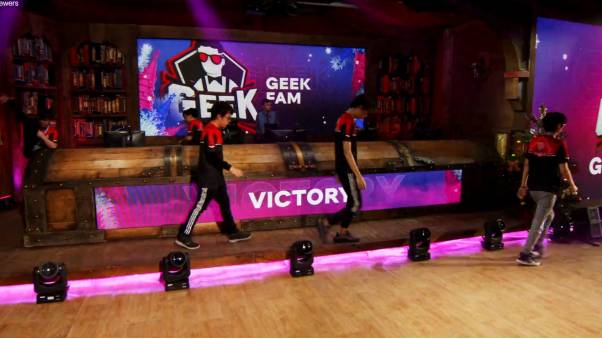 While the series was very epic and intense, it did not stop Dubu from fooling around during the game. After a Gambit hero dies, Dubu would all-chat what I think is the buyback cooldown of each hero. That’s definitely a weird yet massive disrespect by Dubu himself!

Despite Gambit’s loss, they still played some epic DOTA today but unfortunately, even the best team will fall and it’s the story of Gambit, who went on a winning spree in the group stage, only to be eliminated the next day. Stay tuned.