Why Nigma failed against Fighting Pandas

Why Nigma failed against Fighting Pandas

Since the TI9 grand final’s defeat, Nigma has not been delivering good performances as per the expectations and it feels like they have lost the synergy and extraordinary game play. Draft, execution and item choices were disastrous for Nigma in their series versus Fighting PandaS at the WePlay! Bukovel Minor. Read the article below to see the detailed analysis of their defeat. 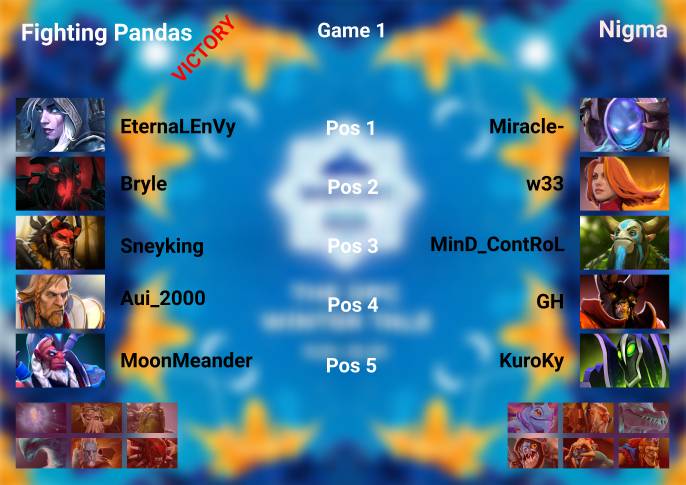 Nigma drafted a split push strategy whereas FP drafted a team fight strategy. Nigma lacked disables but had the ability to control the map. They also had a good early game as they killed the enemy Shadow Fiend several times but the most shocking thing was that Shadow Fiend recovered so quickly that he had the highest networth at 11th minute.

Nigma could have played more aggressive and tried to find more kills but they didn’t and FP were all over the map. Nigma were neither able to split push nor to team fight which made them lose the game. Normally, in a split push scenario, 4 heroes can defend a little bit and 1 can split push. But if 2 heroes split push then 3 can’t defend effectively. And as they lacked durable heroes, they couldn’t fight against the right click damage of Shadow Fiend and Drow Ranger. 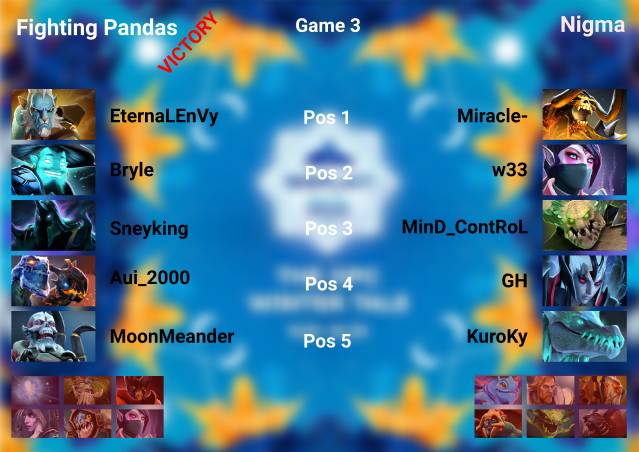 The analyst panel loved Nigma’s draft mostly because of the Underlord pick. And when I saw the Underlord pick even I thought the same. Fortunately, my algorithm doesn’t have a biased perspective and that’s why it calculated all the things and considered FP’s draft as the better one at 69% win chance. 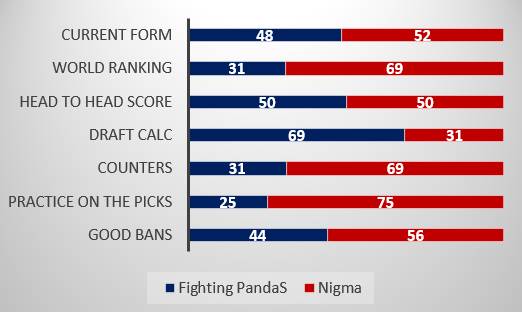 These stats give a full view of how strong they are before the game began. Current form is almost equal for both the teams which just shows their recent win rate in pubs and pro matches. Draft calc is at 69% for FP whereas Nigma picked good counters and had more practice on the heroes they had picked here. 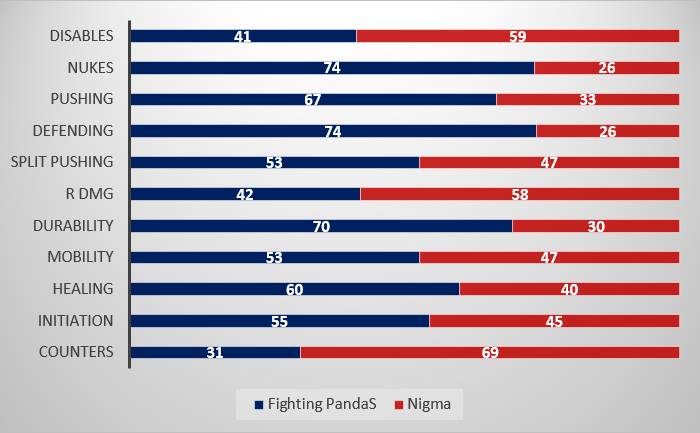 Nigma had better disables, counters and right click damage but they had a huge disadvantage in nuke damage, durability, pushing, defending and healing. If Nigma had more durable heroes then they would have had a better game. Even though Nigma had more disables than FP, they didn’t have enough disables to lock-down Phantom Lancer and Storm Spirit at the same time until they would at least kill one of them. When the game ended, Storm Spirit and Phantom Lancer had 0 deaths between them. In a nutshell, FP had a great draft.

During the game, both the teams had a good laning stage but Nigma took a little lead by finding some pick-offs and securing Roshan during the mid game. Soon after the Roshan, FP’s one decision changed the entire game as they decided to fight against Nigma when they already had Aegis on Templar Assassin. Nigma didn’t expect this move at all and FP were able to kill Clinkz and Templar Assassin within a few seconds without losing anyone.

Nigma was shocked after that aggressive movement by FP and suddenly started to play very defensively whereas their items were made to find pick offs. Clinkz had a Scythe of Vyse and didn’t have a BKB hence this should have been used to find some kills around the map rather than pushing for towers or team fights or playing defensively. Apparently Nigma were not confident enough and they lost hope on all aggressive strategies and innovative moves. They tried to take a fight by initiating on Abaddon and that turned out to be disastrous. This gave FP a huge networth lead and map control which soon helped them end the game.

A tip for young players:

Stay true to your items and initial strategy. In the last game, Clinkz bought Scythe of Vyse instead of BKB and this should have been used to find pick-offs. When they utilized it for team fights rather than ganking, Clinkz was not able to be impactful enough as he couldn’t stand and fight even for a few seconds.