The London Spitfire is starting the Overwatch League’s 2020 season with new blood. The team signed four new players from the lower tiers of competition today, leaving fans and analysts scratching their heads.

Babel played the Contenders Series in Australia in 2018 and the Contender trials in 2019. He took part in a series of competitions such as the ZOTAC Cup as a DPS for BM Hawk. 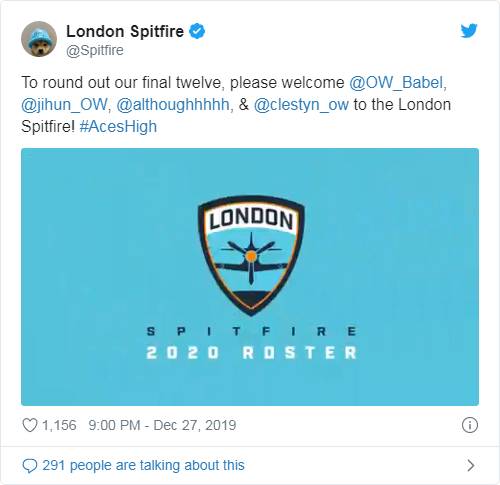 ALTHOUGH played a series of qualifiers for Gen.S, a sister organization for Gen.G, Seoul Dynasty’s academy team for the Overwatch League. He jumped the queue straight into tier-one competition with his DPS play.

Jihun is a tank player who made his presence in the Chinese Contenders series this year for Bubble Burster Gaming. Clestyn will also join the team’s tank lineup, coming from the Contenders Trials.

The signing of lesser-known talent left Spitfire fans baffled. The team’s Twitter announcement was flooded by users trying to discover more about the players’ careers. Liquipedia articles were created in the heat of the moment as fans scrambled to unearth more information on the prodigious newcomers.

The Spitfire’s investment in tier-two and tier-three players contrasts its star-studded seasons in the Overwatch League so far. Veterans like Kim “Fury” Jun-ho, Park “Profit” Joon-yeong, and Kim “Birdring” Ji-hyeok, who played a significant role in the team’s season one championship, were released during the offseason.

The four newcomers weren’t a part of the eight-man roster announced by the Spitfire last month. Seeing them on the battlefield could be a rare occurrence due to their inexperience, but the Overwatch League presents an opportunity for them to showcase their talent.

下一篇：Could Junker Queen be the next Overwatch hero?