mousesports move on to EPICENTER semis over Evil Geniuses

mousesports move on to EPICENTER semis over Evil Geniuses

Putting on a convincing show against Evil Geniuses, mousesports have made it through to the semi-finals at EPICENTER after coming out on top of Group B.

Once again playing with Igor "crush" Shevchenko instead of Vincent "Brehze" Cayonte, whose visa situation still appears unresolved, Evil Geniuses could not repeat their success from the opening match as they went up against a strong-looking mousesports.

The European side managed to shake off a tough opening matchup against Virtus.pro earlier that day, securing a berth in the semi-finals with a dominant victory, leaving EG to play for quarter-final seeding on Thursday.

The series began on Train with mousesports looking in cruise control on the Terrorist side at first, mounting a 5-0 lead, but Evil Geniuses put together a decent defensive half despite the early deficit, winning seven out of the last ten rounds thanks to some great AWPing from Tsvetelin "CeRq" Dimitrov.

The North American team got their first lead at the beginning of the second half with a pistol round victory, courtesy of Peter "stanislaw" Jarguz's triple, but a dominant defense saw mousesports turn things back in their favor and close out the map comfortably at 16-11.

Starting on the defensive side on Inferno, Finn "karrigan" Andersen's team put on another one-sided performance despite losing the pistol round to CeRq's ace, as Özgür "woxic" Eker replied with two kills and three assists with the Scout in the second-round forcebuy before mousesports started setting the pace with timely aggression.

Evil Geniuses could only find two more rounds in the first half with a couple of consecutive B attacks and, once the sides switched, they couldn't convert another pistol round win, with the European squad rallying to a quick 16-4, 2-0 victory. 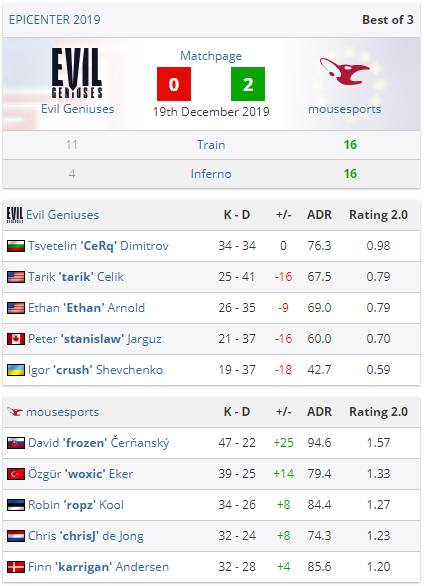