Gladiators Legion latest to drop out of OC

Gladiators Legion latest to drop out of OC

Gladiators Legion announced today they will not be participating in the 2020 seasons of Overwatch Contenders North America. The Los Angeles Gladiators’ academy team is the latest in a line of organizations to bow out of the tier two professional Overwatch competition.

“Today we made the difficult decision that the Gladiators Legion will not be participating in Contenders for the 2020 season,” said the team in a Twitter post. All of the Legion’s roster and staff have been released.

Gladiators Legion were a relatively successful academy team, ranking second in both of the 2019 North American Overwatch Contenders seasons. They made it to the The Gauntlet in South Korea, but were eliminated in the quarterfinals. 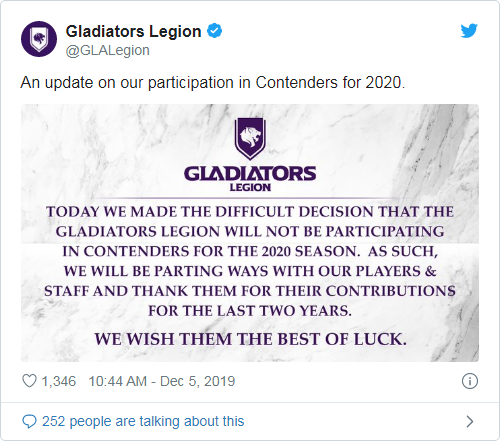 While it’s not unusual for teams to drop out of a competition, concern arises when multiple academy teams are cutting their losses. Academy teams are rosters owned by Overwatch League organizations; two-way contracts allow teams to share players on a short-term basis. With the backing of Overwatch League organizations, these academy teams often have more financial and managerial support to foster talent. The fact that these teams are the ones to drop out is increasingly troublesome.

Overwatch Contenders returns in January 2020 with a host of new changes, including a point-based, biweekly match schedules.