March: TNC have what it takes to overcome every foe

March: TNC have what it takes to overcome every foe 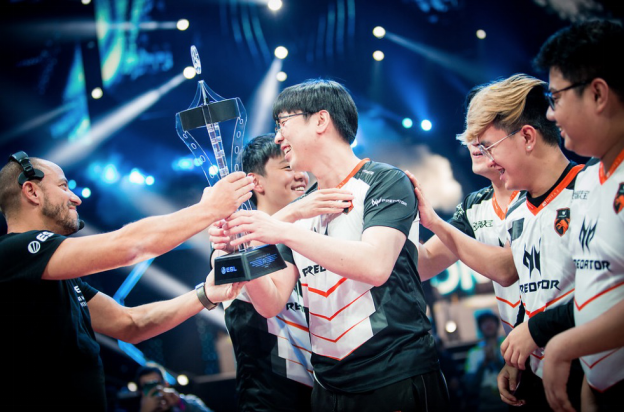 TNC Predator has been unstoppable lately in all the LANs they’ve attended this 2019/20 Dota Pro Circuit Season, they’ve been crowned champions. The addition of the Damien "kpii" Chok with his versatility and stability in the role of Offlane and the wiseness of their new captain Park "March" Tae-won have been a huge impact in their recent success.

Being the first South East Asian team to win an ESL One title while also consecutively winning the first major tournament the organization has ever one, TNC Predator currently stand to be the #1  team next to back to back TI Champions OG  according to gosugamers.net rankings

Courtesy to KarY of Luckbox for this interview (https://luckbox.com/esports-news/article/tnc-march-dreamleague-13-mdl-dota-2-interview) of March during their post victory of MDL Chengdu.

Congratulations on winning MDL Chengdu Major with TNC. This is your second consecutive championship win with TNC — after ESL One Hamburg — on the grand stage in your long career. How does it feel to finally taste so much success, especially at the beginning of the new DPC season?

I don’t really know what to say other than it feels great, but at the same time despite the great start I’ve had, I try not to be complacent or overconfident. I understand the importance of doing well at TI and will strive to work harder every time.

While you won against Gambit Gaming at Hamburg, you won against the tournament favourites — Vici Gaming — at Chengdu. Did you expect to take the cup? Interestingly, it’s also the first time for TNC to win two major tournaments in their organisation history. What are your thoughts?

Our team were confident going into the MDL Chengdu Major. We knew our strength and tried to not really care about who our opponent was, despite Vici Gaming having a good win-rate against us on the bigger stage. It feels great and happy to be able to win a trophy and give it to the organisation.

Has your previous coaching experience with Wind and Rain as well as Fnatic at TI9 helped you contribute more as an individual and as a captain? What value do you bring to the team?

Coaching experience has immensely helped me because I got to learn a lot about new ideas from different teams that I’ve coached, and that’s exactly the value that I bring to the team.

Speaking of which, how did you end up joining TNC and why?

During TI9 I had a chat with Armel and the conversation seemingly went well. However, it is Heen that I should really thank. He acted as the bridge between TNC and myself. He recommended me to TNC and as they say the rest is history. I really wanted to play with these incredible bunch of talented players and I’m glad I got the chance to do so.

TNC will be playing in the DreamLeague Leipzig Major qualifiers in the coming days. How are you prepping for the same especially after 7.23 patch just exploded causing the biggest conundrum one must have ever seen in this game?

To be honest, I absolutely have no clue about this patch and I am just spamming pubs to understand more about the game that is most likely to evolve due to the latest patch release.

Give a brief overview of the patch. What you like, dislike, something that needs a change, the next set of promising heroes that’ll be relevant in the competitive scene, neutral drops, etc. How does this patch change the way Dota 2 is played? What are the new things ordinary players can expect to see?

I like how the map is changed and how the location of the ancients has been tweaked around with so it is not that obvious to play around Roshan and camp enemy ancients when it is not. I have no idea about heroes nor the neutral drops since at present I am just enjoying the game and trying to get more accustomed to the patch.

This time around, the competition will be even tougher considering teams like Secret, Nigma, OG and others are back to the grind. Do you think TNC has got what it takes to overcome them? Which team are you looking forward to compete against the most, and why?

Yes, I completely believe that TNC has got what it takes to overcome all of them. I am looking forward to playing against all the teams and in process meet with more challenges. It’ll be more fun and only lead to improvement. Win-win situation really.

According to you, which team do you think has the potential to give a run for your money in SEA?

Other than obvious strong teams in SEA such as Fnatic, I believe 496 has good potential to become a front runner and give a run for our money.

Do you think TNC can win DreamLeague Leipzig Major and overcome all the odds? What advantages do you think TNC has going into the next major as opposed to other teams?

We are confident but we will see, it is too early to say about anything as we haven’t played a single scrim since the patch was released. However, I believe our players are hardworking and we have good work ethics and that our team will be strong contender for the title at the DreamLeague Leipzig Major.

Finally, is there anything you’d like to say to fans?

Thank you for all the support. It really warms my heart. Keep showering love and support on TNC. We’re extremely grateful for that. Thank you.

They now have a streak of 2/2 of in all of their LAN attendance currently and still seeking to continue that greatness as they fight their way into DreamLeague Season 13: The Leipzig Major South East Asia Closed Qualifier. What are your thoughts? Tell us in the comments down below and I’ll see you in the next one