mousesports lost their map pick to TYLOO, Overpass, and were down seven match points on the second map, Inferno, but they managed to turn it around in overtime and win Dust2 in-extremis to punch their ticket to the CAC grand final.

A victory at the regional eXTREMESLAND Asia Finals gave TYLOO some much-needed confidence following several last-place finishes at international LANs earlier this year, including the recent IEM Beijing. TYLOO beat all odds with a clean group stage run at the CS:GO Asia Championships, but were unable to go past mousesports, giving up seven map and series points on Inferno.

mousesports, who bounced back from a lackluster showing at StarSeries i-League Season 8 by qualifying for the ESL Pro League Finals, have now made it to the final of the CS:GO Asia Championships, where they will face the only team to beat them at the tournament in Shanghai, ENCE, in the grand final.

mousesports kicked off Overpass on the attack with an opening frag by Robin "ropz" Kool and doubles by David "frozen" Čerňanský and Finn "karrigan" Andersen. TYLOO pushed back winning the forcebuy to take control early on in the half, going up 6-2. The Europeans were able to win two more rounds in a row to make it competitive again, but TYLOO didn’t give up control with on-point aggression to hold the reins of the half. It wasn’t until the last round that mouz were able to tally another thanks to a 1vs2 clutch by ropz.

Doubles by Hansel "BnTeT" Ferdinand and WingHei "Freeman" Cheung made it 11-5 after the second pistol round. Three rounds later it was karrigan and Chris "chrisJ" de Jong who got doubles on the defense, but it would prove to be too little too late as TYLOO didn’t soften their grip on the map. HaoWen "somebody" Xu and BnTeT eliminated all opposition to make it 14-6 and another three-round streak against a mousesports struggling to put on a proper buy ended the map, 16-6. 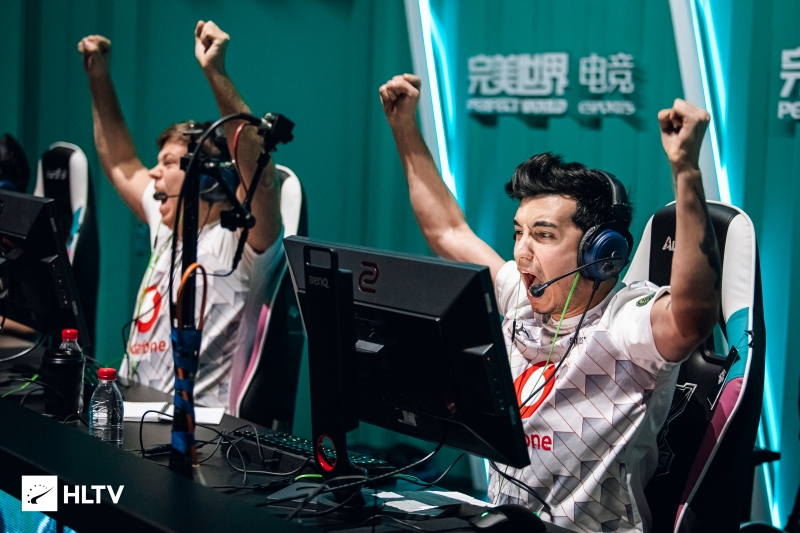 Inferno started off with mousesports once again winning the first pistol round, albeit this time on defense, and TYLOO winning the forcebuy. somebody got a crucial double spraydown on A in a three-kill round to go up 4-1. Two kills by chrisJ and two by karrigan in a 4vs4 retake marked another for mousesports, making it 2-5, which they were able to follow up with a B defense. The half then evened out and ended with just a one-round difference in favor of TYLOO, who were able to break the stalemate before switching sides.

BnTeT got a pistol ace on Banana to keep TYLOO on track to a second map win en route to the CS:GO Asia Championships grand final. Six rounds in a row edged the Asian team as they dominated on the CT side, but they’d have to wait after hitting match point as mousesports exploited their jitters, which turned into a choke as the Europeans kept pushing and pushing all the way to overtime. ropz got mouz ahead with a 1vs2 clutch, and they kept the lead with a 2-1 half. An in-extremis plant by somebody in a 1vs1 tied it back up, 17-17, but it was ultimately mousesports who were able to push it to map three. mousesports won the first pistol round on Dust2, this time following it up as Özgür "woxic" Eker wreaked havoc down mid with a scout. The European squad were quick to take control on the defending side and it wasn’t until the eighth round that TYLOO were able to get on the board. The Chinese side got three in a row, but mouz were quick to bring it back as ropz and woxic dominated, ending the half 9-6.

TYLOO kept it close winning a 3vs2 retake on A in the second pistol round. They were then able to come out on top against the forcebuy, and although they gave up the third round, YuLun "Summer" Cai and company took the lead for the first time in the decider, 11-10. A 1vs2 afterplant clutch by woxic tied it back up on B, which then put mouz in the lead until the very last round. With 15-14 on the scoreboard, woxic once again won a clutch on B, this time a 1vs3, to secure his team a spot in the final against ENCE.