NoSmite played for X6 Gaming in Overwatch Contenders Korea before being picked up by the Hangzhou Spark in 2018. In the early stages of the Overwatch League’s second season, NoSmite shared stage time with fellow main tank Xu “Guxue” Qiulin. NoSmite showed an understanding of Reinhardt and the tank skills necessary to succeed in the triple-triple meta.

As the meta changed and the Hangzhou Spark grew accustomed to a standard starting roster, NoSmite took a two-way contract with the Spark’s academy team, Bilibili Gaming. This allowed him to play regularly in Overwatch Contenders China while still stepping in for Guxue if necessary. 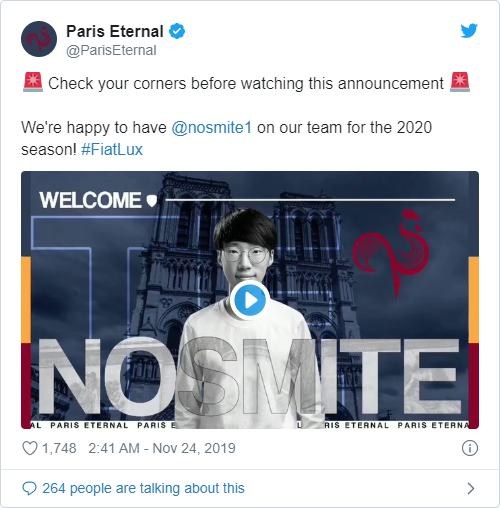 Earlier in the offseason, the Hangzhou Spark announced their 2020 roster and NoSmite was suspiciously absent. The Paris Eternal have capitalized on this chance to add a talented main tank to their team. Their current main tank, Benjamin “BenBest” Dieulafait, shared stage time with Roni “Lhcloudy” Tiihonen throughout most of the Paris Eternal’s season.

NoSmite’s signing is a continuation of the Paris Eternal’s huge offseason reconstruction of their roster. Former Element Mystic players Kim “SP9RK1E” Young-han, Jung “Xzi” Kihyo, and Choi “Hanbin” Hanbin have joined the team during the offseason, creating a mixed-language roster for the formerly full-Western team.

The Paris Eternal will hold three homestands at the Zénith de Paris during the 2020 Overwatch League season.