RunAway has won multiple titles in Overwatch Contenders Korea, but the organization may now be looking to spread their success to the League of Legends stage. RunAway’s founder Yoon “Runner” Dae-hoon is in negotiations to acquire a Challengers Korea team, according to FOMOS.

Further details in the report state that Runner is currently negotiating with an already established Korean Challenger team. This deal would provide the Challenger players with a stable organisation and practice facility, as well as having them don the famous RunAway pink color and brand. 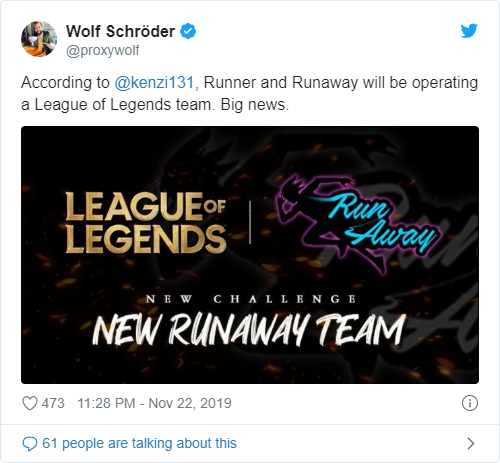 The RunAway brand was created in 2016 by Runner and his wife Hyun-ah “Flowervin” Lee and has since become the epitome of wholesome esports content. Extending from the wife and husband foundation of the org, RunAway is known for creating families out of their teams and extending that love to their fans.

With this bond throughout many roster iterations, RunAway has brewed success by the bucket. In 2019, the initial RunAway roster was sold to the Overwatch League where they re-branded as the Vancouver Titans. That team went on to be the most consistently dominant team throughout the season. All the while, the newly constructed RunAway roster in Korea picked up where the old team left off by winning two Contenders seasons.

The report states that Flowervin will continue to oversee the Overwatch team as her husband Runner will take the reigns in their new League venture. RunAway is already such an iconic brand and as such many of their fans have already vowed to support the brand going into a new game. If Runner is able to find success in League, then the beloved fairy tale that is RunAway will find its way into the hearts of a whole new audience.